Take an escalator and before the lift arrives Britney’s face is plastered all over it, gamble in the casino and we bet you a handful of dollars you’ll see her print on a poker table, thinking of buying a souvenir for your family back home? Why not pop in the Britney Spears Gift Shop?

The Louisiana singer has history with Arnie’s endorsed burger joint, as a teen she expressed her love for Planet Hollywood. A few years ago when she first escalated to showbiz heights the food chain was called in to cater for hospitality requirements. Hell, she even celebrated a birthday party there once. So it wasn’t a huge shock when Planet Hollywood announced their AXIS auditorium would be the home of her Piece of Me show and boy, didn’t they shout about it!

On September 17, 2013 the partnership was announced with a gross publicity campaign which saw over a thousand of Britney look-a-likes holding up cards in the Nevada desert to represent a picture of their heroine. Those look-a-likes must also be pretty miffed...

The reason for the unsettlement is revealed after the five minute countdown has reached zero and we are told ‘Britney wants us all to dance and have the best night of our lives’. Film footage is shown of various Britney titbits and then she arrived in a mechanical ball...with dyed black hair! That bombshell we encounter each time we ascend to our hotel room and the hordes of Britney wannabes are now dated. This is Spears part two...although her miming skills have improved sinced her Femme Fatale Tour three years ago.

We won’t indulge into the lip-synching debate. Journalists say she mimes; Britney keeps her mouth shut and says she doesn’t. It doesn’t alter the fact the Piece of Me show looks epic. From the moment of opener ‘Work Bitch’ to twenty four songs later when ‘Till the World Ends’ wraps up this ninety minutes performance in a city populated by Cirque du Soleil shows the Britney circus has arrived in Vegas and it’s one hell of a party.

After ‘Womanizer’ the third song is ‘3’ – how original is that? ; Where Britney and her backing tape are surrounded by luminous poles held by an array of dancers. Our princess then grows a pair of wings as she graces through ‘Everytime’ before doing it ‘(Baby) One More Time’ and then ‘Oops!... (She does) It Again’.

Okay, let’s backtrack a paragraph and stop messing around. The notes to ‘Everytime’ are composed alongside snow projected on the expanding screens which reach round the venue’s corners. ‘One More Time’ sees Spears being serenaded by topless male dancers and fireworks and the pop star is tangled up in red silk throughout ‘Ooops!...I Did It Again’.

Its montage time, so keep your eyes on the screens as we are reminded of Britney’s past videos whilst she changes into a blank skimpy number topped with a black hat as she battles against her backing vocals for ‘Me Against the Music’ before she greedily asks us for extra crowd participation in the disguise of ‘Gimme More’.

A hefty chunk of ‘Piece of Me’ is a compulsory part of the setlist – it is the title of the show after all, before the absence of Will.I.Am is compensated for with William Adam’s face shown on a screen as the Black Eyed Pea star technology duets with Britney for ‘Scream & Shout’.

The show works because Britney has done away with the dire storylines her past tours have incorporated and the lack of banter between songs. For those who caught her on previous joints around the country you can’t argue how the watered dismal plot belittled the songs. We recall seeing Britney on the ‘...Baby One More Time Tour’ during 1999-2000 which never needs repeating and the dismal ‘Onyx Hotel Tour’ four years later which was aimed for pre-school infants as we tried to follow an intergalactic plot layered with too many black holes. Fortunately ‘Piece of Me’ is a straightforward classic hits concert and it’s all the better for it.

The concert isn’t just a trip down memory lane though, new track ‘Perfume’ whiffs of a future hit single which could be up there with a further song in the setlist ‘I’m a Slave 4 U’ if its performer and record label trains it well enough. 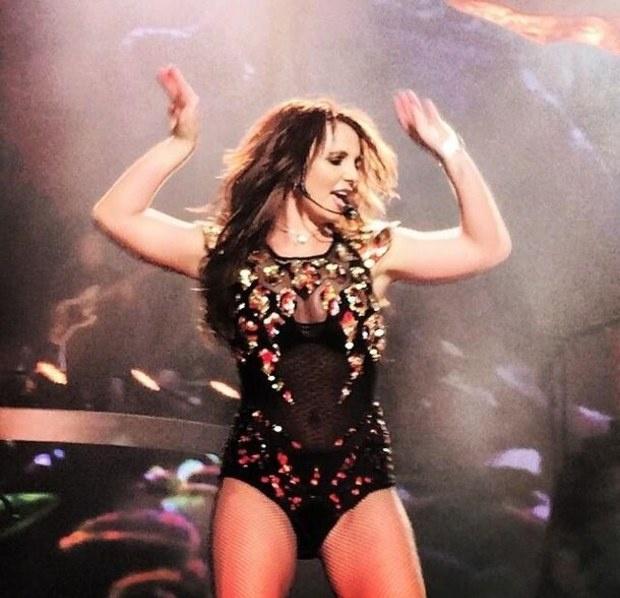 Britney has never excelled when it comes to physical connection between her fans. Sure, she will sign a few merchandise goodies and have them deported to a few die-hard fans, sometime in the literal sense when a devotee is battling a life threatening illness and there’s a publicity opportunity to come out of it. But meeting her adoring worshippers hasn’t tallied well for those desperate to meet their idol, so it comes to a bit of a shock when she picks a male out of the crowd and subjects him to sheer humiliation as she treats him like a slave during the aforementioned controlling number...And then gives him a signed T-Shirt!

For ‘Do Somethin’’ she uses a chair for a stage prop, the dance number isn’t too be taken sitting down though as Britney continues to be embedded by her dancers which tend to over-shadow her now and again with their masculinity and dextrous dancing rituals, especially through this particular slot in tonight’s recital.

Unable to let go of her big top tentative (Britney’s 2009 tour was self indulgently titled ‘The Circus Starring Britney Spears’) ‘Circus’ is performed alongside human puppets whilst the shows chorographer pulls the overhead strings to produce a spectacular display of strong men, blazing hoops and shooting confetti cannons. After clowning around our star enters a mirror maze which reflects the lyrics to ‘I Wanna Go’.

Enough of this stagecraft malarkey, the greatest show in town is reaching its final numbers so it’s time for our ringleader to take a set and perform a solo performance of ‘Lucky’ before one of the most lavish and in the promoters eyes, ‘the centrepiece’ of the whole evening is rolled onto the stage...it’s a fabricated tree!

The rainforest which has now grown right before our eyes backdrops her three penultimate tracks of the night...’Toxic’, ‘Stronger’, and ‘(You Drive Me) Crazy’. As Britney performs in the wildness we have to ask ourselves, will this show continue to bring in sold out crowds night after night or will the ongoing controversy over the ‘live’ vocals chop down the trees which have allowed Spears to branch out in the Las Vegas territory? Only time will tell.

Me Against the Music

Get Naked (I Got a Plan)

(You Drive Me) Crazy

Till the World Ends

Take a trip around Las Vegas with ABLE2UK. Your journey starts right here.