It would be wrong to use speech marks as the conversation we had with Andy Crane took place thirty years ago so it’s impossible to remember word by word, but it went something along the lines of…

Yeah I went last week. It was one of the best events I ever went to. We partied so hard afterwards. Don’t think I’ve fully recovered yet!

In 1996 Crane was at the peak of his career. Promoted from a BBC presenter whose only company was a duck glove puppet he had recently finished a successful stint fronting a kids Saturday morning TV show. Being one of the most popular faces on television at the time it was obvious he would had been amongst the host of celebrities invited to the MTV EMAs which was held at Alexander Palace.

This very journalist remembers the meeting quite vividly as we watched the show on our friends TV set – one of the only people we knew back then who had MTV. We were so jealous of Mr. Crane!

Thirty years on and the awards have eventually returned to London town, but there’s an air of sadness we can’t shrug off…

The Remain campaign missed a trick last year. Leading up to the Brexit they bleated on about how much stronger Britain would be if we stayed in the EU, there would be more jobs, lower prices in shops, trading benefits…All well and good, but they didn’t mentioned the deal breaker…Leaving the EU would mean our country would never host the European Music Awards again!

So, let’s make the most of this review. Ready for our annual rundown of the greatest awards show on the planet? Well, assuming you are on the right side of thirty and you don’t associate the term ‘lit’ with what happens when you switch on a bulb you’re gonna enjoy it…

"We've all done a lot a work to bring the event back to London and to bring it to Wembley for the very first time.” – the words of Wembley boss John Drury.

That work didn’t just include the extra marquees erected outside the venue, the warehouse converted for one of the after parties, Wembley Stadium dazzling the skyline with the EMAs coloured branding…The accessible platform should had won an award on its own accord. A posh raised box giving guests a perfect view of the stage was mind-blowing and just goes to show how much effort the organisers put in to the event behind the scenes. It’s also the place where we used our phone to take notes for this very review away from any distractions…Or so we thought!

There was speculation to whether Eminem was going to make an appearance, so it was still a surprise when Marshall Mathers opens the show with ‘Walk On Water’ in front of a biblical orchestra.

From one miracle to another…okay maybe that going a tad too far but having Rita Ora host this year’s ceremony is a dream come true. Her BBF Nick Grimshaw is seated in the VIP section alongside Ora’s family members, so has quite a bit of moral support tonight.

Grimmy and Rita were both judges on The X Factor which is a slick link for the next performer…Liam Payne. After breaking free from the world’s most successful boyband he’s busy sharing baby duties with Cheryl. Mind you, he still has time to concentrate on his solo career which is given an extra boost tonight with a billion viewers across the globe watching his performance of ‘Strip That Down’.

Liam’s success was all thanks to Simon Cowell’s popular talent show where his solo performance wasn’t up to scratch but he was offered the chance to team up with a few other budding young singers to form a little-known group called One Direction. Over in the States Camila Cabello’s story runs almost parallel.

Cabello’s audition for The X Factor never made it to US screens because Cowell couldn’t secure the rights to her version of Aretha Franklin’s ‘Respect’. Failing at Boot Camp she was called back to form a new girl band…Fifth Harmony. Splitting from the group in 2016 she has now become a global star thanks to her chart topping track ‘Havana’ which is played tonight in front of a huge eyeball and a stream of sunbathing dancers.

Eminem, Payne and Camilla – Not bad for a show opening eh? We doubt Mr. Drury will see such a spectacular start to a gig in his venue ever again!

The first award is handed out to Shawn Mendes who picked up Best Song for ‘There’s Nothing Holdin’ Me Back before we cut back to Rita in the VIP area. It’s time for a short break, up next we are going to be glued to the stage bringing you what went down during Demi Lovato’s set…Well, that was the plan.

The accessible platform wasn’t just reserved tonight for guests with a physical disability. A couple of familiar faces had just made an appearance. Everybody who has met Jedward in the music industry has the same opinion of the two brothers…They maybe a handful, but you can’t help loving them...Oh and you can never get a word in edgeways!

Jedward came up to meet the guests on the accessible platform during the break – which you have to admit was a really lovely touch! When they came over to us we told the boys we worked at ABLE2UK. ‘Want us to do a shoutout?’ John or Edward asked us. We told them it was a lovely gesture but we needed to review Dem…’No it’s cool, it’s cool. Let me call my brother’. John or Edward called his brother over to record a video on our dying battery phone. They messed up their first attempt…In fact the ‘film directors’ took the entire length of Lovato’s set to record the message…So um....We missed it!

Fortunately we managed to catch Eminem giving a special shout out collecting his award for Best Hip Hop and man of the moment Stormzy performing next to police car and being raised to the roof…There’s nothing too big for his boots! The HipHop section culminates with Kendrick Lamar picking up Best Video for ‘Humble’.

Shawn Mende’s fans are probably still trying to crash social media after their idol won Best Song a few minutes ago but they have something else to rave about now as they compose a newly-improved 280 character review of his performance of his winning track. We guess, judging by what we saw, a fan in the front row uploaded the message: 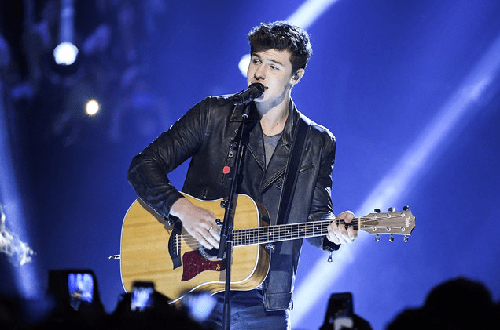 Shawn Mendes performing 'Nothing Holding Me Back'

He’s a little more less enthusiastic than your average pop fan, but James Bay still seems pretty pumped after being asked to hand over Best Alternative to Thirty Seconds To Mars before we orbit back to the main stage for a melody of hits fronted by Clean Bandit and friends.

Speaking about friends – Jedward are back on the viewing platform to watch a recording of U2’s amazing performance of ‘Get Out of Your Way’ from last night’s concert. We were there to catch all the action…Which was a good job, as our phone battery logo has turned red…Because quite a bit of our juice was used up by recording a video!!

Someone else who may need her batteries is Camila Cabello who is probably still cooling down after her performance – which was incidentally cleared for TV this time! Before she can take a breather ahead of the after parties she has the honour of collecting the award for Best Pop.

French Montana’s performance of ‘Unforgettable’ is Lit! The same can be said for Travis Scott…It’s been quite a journey for Jacques Webster, Jr. who started his career at the age of sixteen teaming up with a school friend in a group called The Graduates, two years later he formed a second band – The Classmates – before branching out as a solo artist in 2012. Tonight the once middle-class Texas boy soars over the accessible platform perched on a mechanical bird performing ‘Butterfly Effect’ to a global audience. 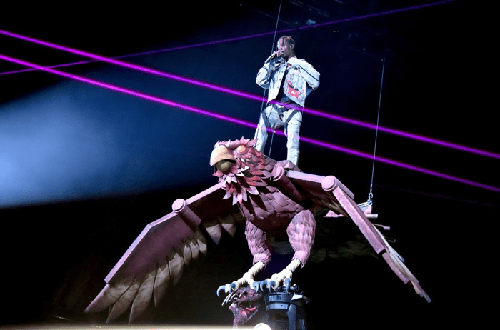 Travis Scott on a mechanical bird

The Killers know a thing or two about playing to sold out arenas and it looks as if they have no intention of slowing down judging by tonight’s live version of ‘I’m Your Man’ sandwiched between their World Tour. Brandon and the boys play in front of the Mars symbol. But it’s Venus sign we should be paying attention to for our next performance which sees Kesha dropping a pot of gold lyrics from her latest release ‘Rainbow’….Watched by two leprechauns who are still meeting fans on the accessible platform!

We mentioned them earlier and now they are here in the flesh…U2 take to the stage to collect the MTV Global Icon Award. Bono, for some reason, starts singing the words to Stormzy’s ‘Blinded By Your Grace’ which prompts the rapper to tweet:

Just like last night U2 are followed by David Guetta (when he played in Trafalgar Square). The DJ superstar teams up with Charlie XCX and French Montana for a show-stopping performance of ‘Dirty Sexy Monday’ followed by a very special trip down memory lane…

What could well be the last EMAs in the UK closes with George Michael performing at the 1996 awards from Ally Pally. Everybody in the house shows their respect to the late musician and we probably guess the viewers watching from home…For example a certain freelance newsreader for ITV Granada who goes by the name of Howard Andrew “Andy” Crane!

BEST SONG – Shawn Mendes, ‘There’s Nothing Holding Me Back’