Milan. Home to 1.3 million people. The fashion capital of the world which dedicates four weeks a year to showcase some of the world famous designer’s new wares. It’s where you’ll find Europe’s largest opera house, Teatro alla Scala and of the most worshipped paintings in the world, ‘The Last Supper’ by Leonardo da Vinci.

This year Expo has returned to the Italian city, the World Fair which travels the globe on a bi-annual basis. In 2015 the theme is ‘Feeding the Planet, Energy for Life’ which focuses on how technology, creativity and culture relate to our food and diet. Whilst the exhibition has been ramping up thousands of visitors across town there’s another energy buzz in town and it can be traced back to an underwear store found in the heart of Via Grosotto shopping centre.

The bulging excitement compressed inside the pant store comes in a very excited package thanks to MTV. Downstairs the media have been gathered for this year’s official press reception for the European Music Awards taking place in just over twenty fours time at the Mediolanum Forum. Seven lucky competition winners are zigzagging through canapés and complimentary drinks to make their way to the stage where they’ll be introduced by MTV presenters and pop sensation Charlie XCX. Tomorrow the chosen few will walk down the Red Carpet and have their exclusive VIP area backstage.

After the reception it’s time to join the thousands of people gathered at Piazza del Duomo for a spectacular concert headlined by Ellie Goulding and Duran Duran as part of the MTV Music Week. This time tomorrow the square will be just as congested with fans watching the Outside Broadcast as part of the awards…This is when the fun really starts!

MTV EMAs. Home to one billion viewers. The mecca for live music which dedicates a whole week of stunning entertainment in its chosen city. It’s where you’ll find some of the biggest names in the world performing on one stage and one of the most worshipped pop stars on the planet, Justin Bieber.

The competition winners strutting down the Red Carpet share the fabric with Fifth Harmony who are performing a special treat for the network’s pre-award television coverage. Inside the forum we are sandwiched between banners, most of them ‘hearting’ Bieber and learning how to count back from ten to Uno in Italian ready for the music event of the year.

Macklemore & Ryan Lewis have the honour of kicking off the proceedings with their recent chart-topping ‘Downtown’, Lewis is hoisted up above the moon, Macklemore skirts around the sidewalk where garbage cans have been left out for collection and scooters are…well ‘scootering’ around the New York suburb. 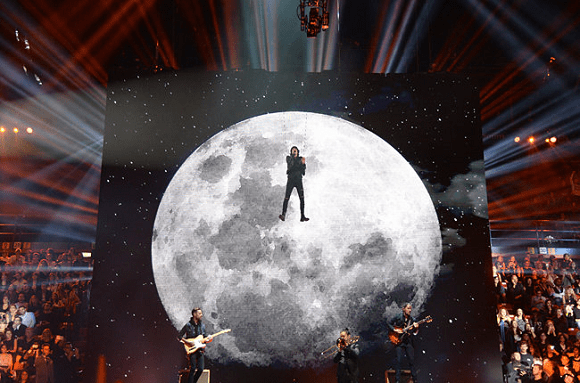 Ryan Lewis rising above the moon at the E M A

Another Stateside delivery comes from one of this year’s host, Ruby Rose. The escapee from FCI Danbury is on the run with the world’s most famous ginger-top, Ed Sheeran to guide us through the next two hours. This year’s theme is ‘Cute Vs Badass’. She’s the latter firing flames from a rifle, He’s the cutie popping confetti over the crowd.

Not too sure which category Jason Derulo fits into, although his badass skills whizzing around on mini-Segway’s with his cute dancers as he blares out ‘Want To Want Me’ seems to tick all the appropriate boxes…but is he the best male in the whole of planet pop?...

…In a word, ‘No’. Before Pretty Little Liars’ Shay Mitchell and Ashley Benson open the envelope it’s obvious a certain Justin Bieber would be rushing to the stage to collect his first award of the night. Amongst the screams JB thanks his Mom, Dad, God, his fans and ‘everyone who has helped me get to this place. He also remarks how ‘nice it is to be recognised for his music’ – could that be a slant towards the media frenzy around those leaked nude photos which were papped in Bora Bora? 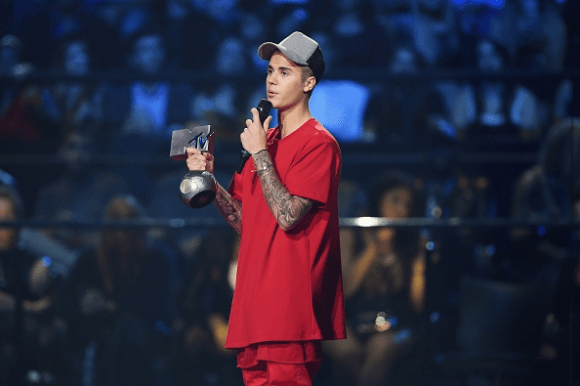 Justin Bieber collecting one of his E M A in Milan

Ed and Rosie manage to keep their clothes on when pre-recorded films interlude the awards and performances. We catch ‘cutey’ at ‘Sheeran Hall’ where his butler tells him his presence is required to host the EMAs, the two ‘accidently’ going into each other’s dressing rooms, Ed meeting the ‘new EMAs director’ – which turns out to be Andrea Bocelli as well as starring in a spoof of ‘Straight Outta Compton’ re-titled to ‘Straight Outta Farmington’ and the ‘badass’ getting a tattoo.

Ruby’s new inked pattern is covered under a ‘spaghetti’ dress when she introduces multi-award winner Ellie Goulding to the stage. Hereford’s finest graces through ‘Love Me Like You Do’ from inside a Krypton like super-thingy shell, glitter falls from the roof, the performance is perfect – but, has she enough super-powers to win Best Female?....Nope, that goes to Rihanna!

From one single to a more sporting kind…Novak Djokovic ‘juices’ up the atmosphere as he presents Best Hip Hop to last year’s EMAs host Nicki Minaj before we take our cockpit seats to zoom off to Piazza del Duomo for a performance from Twenty One Pilots.

Back at airport control Tinie Tempah and model Hailey Bladwin hand over Best Video to Macklemore & Ryan Lewis for ‘Downtown’ before another ideal pairing take to the stage in the form of Rudimental and Ed Sheeran performing ‘Lay It All On Me’ in front of an over-sized boom box which, if real, would be more dangerous than Goulding’s Kryptonite. 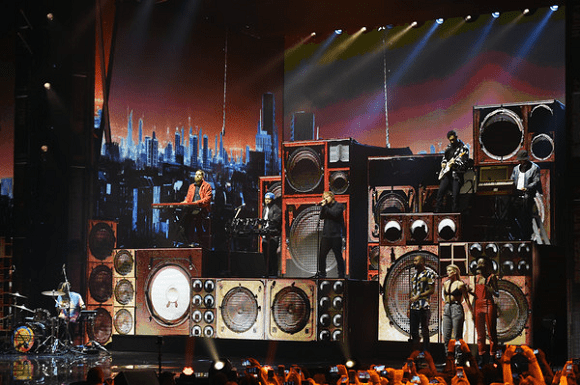 Ed Sheeran and Rudimental performing at The E M A

Pity the humongous stereo didn’t come equipped with gigantic headphones as we could had done with a pair to protect our hearing from the screeching fans during Bieber’s performance of ‘What Do You Mean?’. Justin manages to keep his pair of Tezenis on for a change as screams from the Mediolanum Forum can be heard on a South Pacific Island.

Next Mark Ronson makes a rare solo outing to surprise host Ed Sheeran with Best Live. The accolade must have something to do with the three nights he sold out at Wembley Stadium over the summer, according to a recent interview there’s a slight possibilitly Ed’s next conquest may be held at Knebworth.

Our Ed maybe racking up awards left right and centre, but even he hasn’t had an accolade invented just for his achievements. Such a prize, the ‘Video Visionary Award’’ has been introduce to mark the incredible journey of one of the most successful bands in the world. Since 1978 Duran Duran have sold more than 100 million records. When MTV was launched in 1997 the band were on the channel ‘24/7’ - their most recent appearance was last night’s breath-taking open-air concert.

Wonder if two of this year’s most successful breakthrough artists will achieve such credibly in years to come? Time will tell, although Jess Glynne and James Bay are making a pretty impressive start. Glynne has already won a Grammy for her first UK number one, ‘Rather Be’ but tonight she dips into her back catalogue for a melody of hits including ‘My Love’, ‘Hold My Hand’ and ‘Don’t Be So Hard On Yourself’. Bay? He keeps it simple by Holding back the River as his solo performance is streamed into thousands of homes across the MTV network.

Two more newies, this time presenting awards…Martin Garrax and Charlie XCX hand over Best Collaboration to Skrillex & Diplo ft. Justin ‘cue screams’ Bieber. The Bieb makes another return to the stage, but is there anybody else left to thank? Yep, there’s his Brother, Sister and ‘everyone in the audience’ – just for good measure an added thanks goes to ‘Everyone around the world’.

Next up is Tori Kelly, who Bieber will probably thank later tonight at the Warner Music party, who takes a leaf out of Jess Glynne’s book by cascading through a melody of hits, although due to her condensed discography (a polite way of saying she hasn’t has much success when it comes to releasing singles) after her most successful track, ‘Should’ve Been Us’ the American singer and songwriter covers a few classics…’No Scrubs’ by TLC, ‘Real Love’ by Mary J Blige and ‘Ready or Not’ by The Fugees…then she steps it up a level!...

Tori introduces a legend to the stage…Andrea Bocelli. The classical tenor diverts us away from the popular music to perform a rendition of one of his famous songs, ‘con te partirò’ before blending in with today’s pop culture teaming up with Kelly for a cover of Pink’s ‘Just Give Me A Reason’. 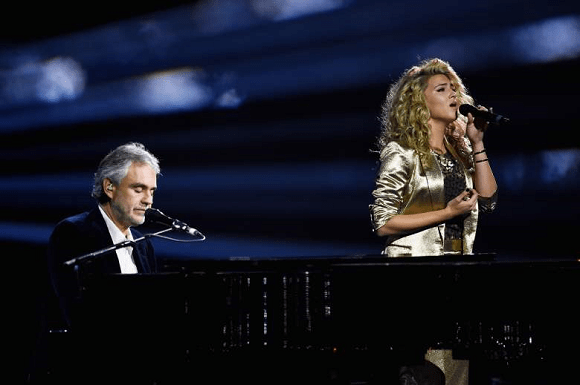 Andrea Bocelli performing with Jess Glynne at the E M A

During the break, which was pre-empted by a few sounds from Afrojack playing in front of the Piazza del Duomo crowd the Mediolanum Forum fanbase are asked for their cooperation during the final act.

Commercials and promos for ‘Ex on the Beach’ over, it’s back to the EMAs and who are these four attractive young ladies who have been making their way down the Red Carpet for the past two hours? It’s only Fifth Harmony - one of the most fashionable quintets who are still together in Simon Cowell’s contact list! Ally, Normani, Lauren, Camila and Dinah finally reach the arena to announce the winner of Best Look. No prizes for guessing who wins it!

Bieber makes yet another short journey to the stage and dogs around the Italian city howl at the high-pitched yells. There’s nobody else he can thank…So he gives his Mom another mention for ‘giving me my looks’.

Time for the final performance of the night and its Pharrell Williams who takes us towards the after parties with his most recent release ‘Freedom’ – Pharrell introduces the number by asking us to ‘Let them in’ which is most probably a reference to the current refugee crisis. The multi-national crowd the pump the air in union every time the title is mentioned as a ‘Freedom’ flag floats over the gathering still present over at the Piazza del Duomo.

The EMAs 2015, another polished, prestigious ceremony hosted by the amazing production team at MTV. Just like the Expo it finds a new country to settle in, this year Milan, next year The Netherlands and there’s more comparison to make between the two global events. This year they both focused on energy, making the world a better place, reaching out to thousands of people. Mind you, the Expo is probably a quieter place…especially when Bieber is in town!

Best Collaboration - Skrillex and Diplo – “Where Are U Now (ft. Justin Bieber)?”