About Twenty-four hours, that’s the last time we were reminded of Miley Cyrus twerking at the VMA’s back in the Summer causing controversy for her unruly behaviour which was followed by her explicit video for Wrecking Ball. It’s Friday night in Amsterdam and in a couple of days time Miley will have the chance to redeem herself when she performs at the MTV EMAs.

Before the main event the festivities leading up to the awards continue around the city and this evening one the most successful bands in the world, The Killers will round off the MTV World Stage at the Paradiso club.

The venue may be small to host such a huge band although it’s no stranger to such stadium acts, over the years U2, Prince and Pearl Jam have played inside the small guildhall- sized interior enclosed by two balconies, the top one of which services tonight’s VIP guests with complimentary drinks.

Two nights ago drummer Ronnie Vannucci made a cryptic statement when the band brought their London show to a close. After tossing his drumsticks out to the Hammersmith crowd he mumbled the three words, ‘It’s All True’. Just a few weeks before he had mentioned to the press his fatigue relating to touring, was this to be the last time we saw Ronnie behind a drum-kit at a Killers concert? If so, his absence would be a shame as tonight’s show showed with two lads sporting Union Jack tops in the front row whichever country you may be in the Las Vegas band always make you feel at home.

The journalist who broke Ronnie’s story may well be here in this room. It’s Saturday morning and whilst Will Farrell is ‘working out’ in a local gym we are ‘figuring out’ how to relay you the activity taking place at the press conference, world press conference to be more accurate seeing representatives from the UK, South Africa and of course Holland are all present. Oh, and a group from Glasgow – the location of next year’s awards which will see the commonwealth competing for a ticket.

We are handed a folder containing interesting facts about Amsterdam, which used to be a small fishing village in the twelfth century being a dam belonging to the Amstel River. Anyway, enough of the statistics lets fish out the exciting titbits from some of the performers attending this media junket. Icona Pop – they are just as nervous about tomorrow’s performance as they are winning one of the three awards which they are nominated for (Best New act, Best Push, Best Swedish act.) Afrojack – we can expect something ‘special’ from their performance and host Redfoo? He’s having two separate rehearsals, one for his presenting skills the other just for costume changes. We are also made aware Eminem will be flying in to collect a Global Icon Award and this year’s theme is ‘Out Of This World’.

More press action takes place later at the Marriott hotel with a cocktail and canapés event hosted by Monster, one of this year’s sponsors allowing them to show-off their new state-of-the-art headphones and a glimpse into the future with their pioneering portable decks which can fit in your pocket all endorsed by Jay Sean & Swizz Beatz who are both in attendance tonight whilst the likes of Snoop Dogg and Miley Cyrus waste away the hours in the Greenhouse coffee shop across town – well, at least that will relax Cyrus for tomorrow so she doesn’t make any more silly PR stunts eh?

OK, ok we know we are almost 600 words in and still haven’t touched on the awards themselves, but finally we are here at the Ziggo Dome, it’s Sunday night and Amsterdam is about to host the EMAs for the very first time!

The spaceship lands and we encounter a close encounter of a Miley Cyrus kind, the only ‘outburst’ she brings to planet MTV is a few chords from ‘We Can’t Stop’ – Good girl!

Next up Redfoo, stripping to a pair of sparkling underwear introduces somebody who’s no alien to the charts, Robin Thicke who crosses his blurred lines with Iggy Azalea who a few minutes earlier showed the world ‘exactly’ what she was wearing when her black outfit revealed almost all when she was papped walking up the Red Carpet.

Thicke’s performance of ‘Blurred Lines’ may have won over the crowd, but it didn’t win over the galaxy as he was pipped to the post by Bruno Mars who walked away with the Best Song for ‘Locked Out of Heaven’ presented by somebody you probably know, Candice van Houten off Game Of Thrones and somebody who probably haven’t, Colton Haynes (Apparently he was the star of the Teen Wolf remake.) Anyway, at least Thicke could celebrate later at his after-show party which being held at The Sand in a couple of hour’s time. 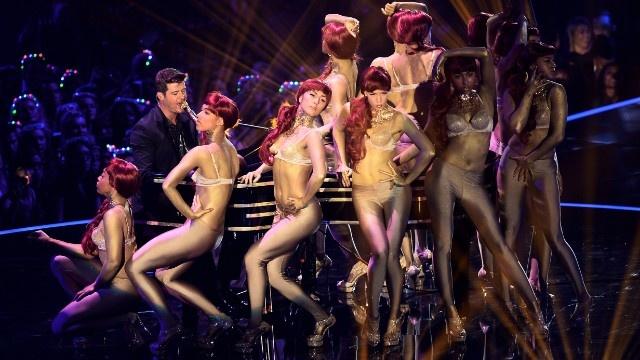 After Redfoo stage-dived into the audience wearing a slinky lycra outfit the ‘special’ treat from Afrobeat was revealed as they played for a few seconds as part of a live link-up from a club in a far far away universe (well, probably a quick taxi ride to be honest!)

Before you could say ‘How the hell were Jedward invited into the celebrity seating area for a second year in a row?’ Katy Perry ascends into the air performing ‘Unconditionally’ wearing a multi-coloured jumpsuit which weaved its way to the hands of dancers excitingly gallivanting around her like maypole. The set looking graceful and Perry’s number about giving a relationship your undying full commitment whatever obstacles life may throw at you came twenty-four hours after ex-hubby Russell Brand bought his stand-up comedy tour to Amsterdam. 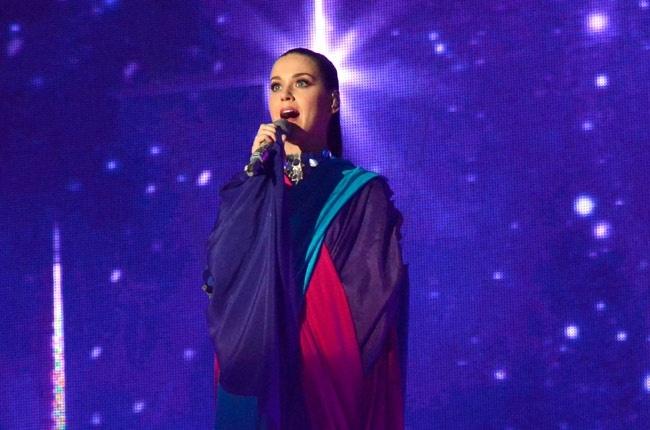 It's about time for another award don’t you think? This gong is for best Hip-Hop and judging Eminem was in town have a guess who out of the nominees...Drake, Macklemore, Jay Z, Kanye West and ‘Eminem’ collected their reward from Rita Ora!

Rita’s BFF Ellie Goulding handed out Best Alternative award to Thirty Seconds To Mars who were crowned over Paramore, Fall Out Boy, Franz Ferdinand and Arctic Monkeys & have a guess which act out of the five were present at the ceremony? In fairness you didn’t have to turn up to guarantee a win, take Justin Bieber for instance who pre-recorded his acceptance speech after picking up Best Male Award, we can think of other awards Bieber could pick up although sadly they are unsuitable for publication.

Remembrance Sunday continued with Kings Of Leon battling their ‘Beautiful War’, the Followill brothers rarely rely on stage gimmicks yet tonight their set reflected another monumental event creating bonfire night inside the Ziggo Dome with their melody lighting a fuse for an array of indoor fireworks before a few seconds of silence was led by Jared Leto for those affected by Typhoon Haiyan in the Philippines.

You know R J Mitte? Is he the coolest guy ever to have cerebral palsy? The Breaking Bad star presented the Best Female award to Katy Perry. The ex-host of the EMA strolled out of the red light VIP seating district to accept the prize reminding the Amsterdam and TV audience her new album ‘Prism’ is on sale now and she will be embarking on a world tour next year.

Its fortunate Bieber wasn’t in Amsterdam tonight as the monkey lover would have had to keep his primate safe, especially as Bruno Mars is on stage harping on about how making love to his misses compares to having sex with a gorilla. If that wasn’t raunchy enough a creature of a different kind often referred to as a ‘pole dancer’ seemed to have escaped from her cage from the local zoo to spice things up during his performance tonight.

Here we go boys & girls, journalist stand by to jot the notes, fans be ready with your smartphones to upload images on Instagram and organisers we hope you are preparing for the backlash Miley Cyrus performance is bound to entail. She takes to the stage, performs Wrecking Ball and...and...well, that’s it! It seems Miley has finally appreciated her songs appeal to a teenage dominated market and her recent behaviour at the VMA dominated the aftermath overruling the show itself. Her set on a podium amongst the crowd was awesome and just goes to show she doesn’t need to rub herself up against a stunted human being to crave media attention.

Meanwhile Ron Burgundy is wreaking his on balls in the Red Light District for a video interlude, later clips will see him riding a bike with Daft Punk and sampling the delights of the cities coffee shops. Although tonight’s main anchorman, Redfoo is back on stage and he wasn’t joking yesterday when he told us he needed a separate rehearsal for his fashion choices tonight as he now wears what is, according to him, ‘an edible outfit designed by Amsterdam’s finest coffee shop’.

There are two huge speakers on stage overpowered by a colossal star. Eminem viciously attacks Europe with ‘Bezerk’ and a sample from his most recent track ‘Rap God’. After a quick interview with Mr Burgundy backstage about the ‘shit’ Afrobeat have been saying about him the new Global Icon makes way for Katy Perry to announce the winner of Best Video...

Less than an hour, that’s the last time we were reminded of Miley Cyrus lighting a joint at this year’s EMA when she was awarded the Best Video of 2013. Once again pop’s newest ‘bad girl’ has made headline news after her appearance at an award ceremony. The rest of the performances might as well go up in cannabis smoke because no matter how perfect they may be nothing will take away the commotion caused by her joint tonight. 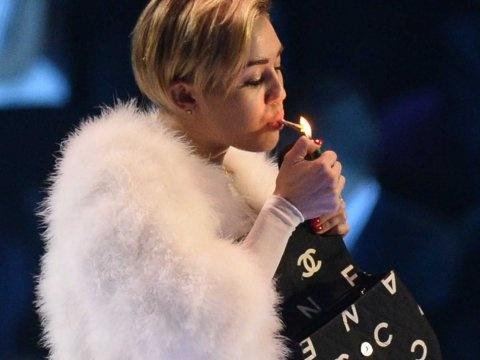 and um, miley cyrus 'performance' at the ema!

Snoop Dogg? He can be as high as he bloody wants – we expect it from him! Later at his after show being held at the Escape club his DJ set will be hidden in a daze of smoke, for his EMA performance, which let’s not forget has an intergalactic Space theme is delivered via a satellite link up from Melkwag, the venue’s title is aptly the Danish word for ‘Milky Way’ where he gives us a rendition of ‘Gin and Juice’. Another cocktail, albeit a more healthy concoction, comes from The Killers who end ‘Shot At The Night’ with an outing from ‘Mr Bightside’. Could this have been Ronnie’s final show?

Here’s another question – Why are Imagine Dragons feeling on top of the world? Probably because the freshest band on earth have been asked to play their contagious hit ‘Radioactive’ at this year’s EMA ceremonies!

Next up and with half their nerves vanished (they didn’t win any awards) Icona Pop close the show telling us they’re still Loving It surrounded by dancers who in a parallel universe are probably the cast of Star Trek-The Musical which just leaves Redfoo wearing his umpteenth shirt to be beamed up to one of the many after-parties taking place across town.

Bruno Mars – Locked Out Of Heaven