Capitol Theater, Kaiserstraße - This small music venue in Frankfurt isn’t the mecca for stadium conquering bands. Despite a quick glance at the popular forthcoming attractions (Noel Gallagher is here in a few weeks time) those playing inside this compact hall will struggle to attract worldwide appeal. Except tonight, tonight is different, tonight is special!

After over a decade out of the limelight No Doubt return with their sixth album, Push and Shove and this evening Gwen Stefani and her band play an exclusive gig ahead of this year’s MTV EMAs which is why we risked life and limb racing to catch the opening of tonight’s show driven by a kamikaze taxi driver (who only stopped once to shout a few angry words at a pedestrian, words we didn’t remember from our German phrase book at school!)

The following afternoon we find ourselves in another small confinement, once again with names which attract a far greater audience. Although this Saturday lunch time gathering has an indirect global focus, it’s the EMA press conference attended by the likes of Carly Rae Jepen and Ludicrous, she’s a performer, he’s a presenter at tomorrow’s spectacular event.

Before we take you to the awards themselves lets round up a few facts and figures from the press gathering...The EMA will broadcast on 700,000,000 TV sets around the world. This will be the ninetieth award ceremony and the second time being held in Frankfurt, the first being in 2001 and this year’s Global Icon Award will be given to Whitney Huston.

Right, there’s your prep taken care of, now it’s time for the awards themselves which took place on Sunday at Frankfurt’s Festhalle centre. Imagine London’s Earls Court yet more glorified, larger and without a date pencilled in for bulldozers next year and that gives you a fairly accurate description of this dignified multi-purpose hall which dates back to the early ninetieth century.

The disabled area couldn’t have been positioned at a better place, right next to the VIP area the front row seats gave an immaculate view of the stages and also welcomed the president from one of the sponsors who arrived on the viewing platform via a Segway.

Decked out as a big top, this years’ travelling juggernaut opened with a trio of live performances introduced by ringmaster Heidi Klum. The first being ‘Totally Hot’ Rita Ora bringing to life her recent chart success, ‘R.I.P’ showered by falling flames.

Next up were Fun. who are fast becoming one of this year’s most successful new artists and were nominated as May’s entry for the MTV Push Award (Carly Rae Jepson scooped the prize, which is given to the most inspiring new act of the year.) The Lads themselves didn’t realise their breakthrough hit ‘We Are Young’ would lead to such critical acclaim yet one person who did was Jeff Bhasker. The producer apparently beat his chest with robust applause after he first heard the finished number. The band, who now wish to duet with the winner of this year’s Best Alternative award, Lana Del Rey, were shopped between mannequins for their debut EMA performance although sadly walked away without any awards. 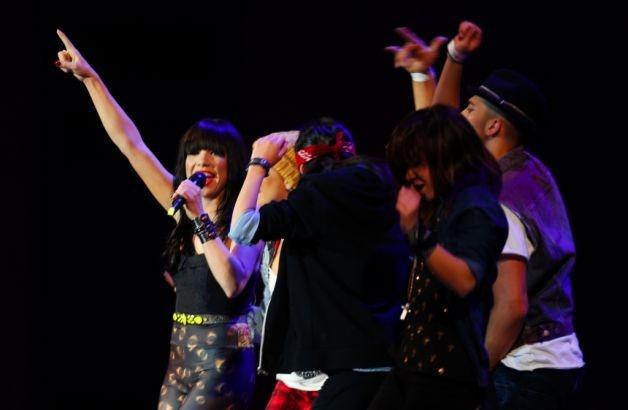 Somebody who did bag some prizes this year was Carly, at yesterday’s press conference she relayed how she wrote ‘Call Me Maybe’ with two friends in Canada. Unlike Fun. it wasn’t her producer who realised she had a hit on her hands, but her Gran, who ‘jumped and danced around the room’ on her first listen. Tonight she literally followed in granny’s footsteps dancing with her fanatical dancers. More celebration moves surely came later in the evening when the twenty-six year old collected two awards including the one for Best Song.

So, three up and coming acts started this years’ awards although the next is someone no stranger to evenings such as these. Alicia Keys has picked up five Grammys and tonight the award-winning performer gave us yet another spine-tingling appearance. It’s difficult though to wrap this paragraph off without such an obvious link between her song and her stage setting as Alicia played her new track ‘Girl on Fire’ under a female acrobat spinning inside a hoop which was set alight.

Two nights ago we caught them playing in a sweaty room a few miles away and tonight ‘No Doubt’ are ‘Looking Hot’ playing their comeback single. The band found fame twenty years ago after releasing their debut self-titled album which gave their fans an insight to what was to follow, however in today’s celebrity hunger fame-game there’s another option to see your name in print which is to become a reality TV star and for a few lad & lasses from Newcastle this D-List path was too good a temptation to resist. Which leads us to the cast of ‘Geordie Shore’ presenting the Best Male award to Justin ‘Sorry I can’t be there with you tonight’ Bieber who also won awards for Best Pop act.

Performing behind a curtain The Killers ran through ‘Runaway’ before having to catch a plane back to Manchester in order to continue their current UK tour before the award were given own for Best Live Act.

Now, bearing in mind we are just journalists and therefore have no right to query who wins what at award ceremonies we shouldn’t pass judgement on those being added an extra trophy for their musical achievements. However, when Taylor Swift overshadows Muse, Green Day AND Lady GaGa for live performances we are a little confused. We will agree the young American deserved credit for first place when it comes to Best Look and Best Female, but has Swift performed under a revolving pyramid? ; On top of escalating platforms? Headlined numerous festivals around the world? Anyway, she won the award whilst Matt Bellamy was backstage preparing for Muse’s ‘unbeatable’ live enforcement of ‘Madness’ trapped inside a labyrinth of lasers. 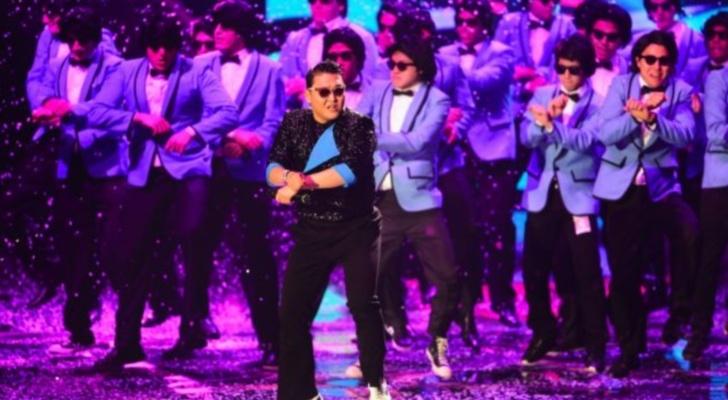 One artist who has taken the music world by storm recently is Psy, topping charts with the party track ‘Gangham Style’. It doesn’t matter that the song makes little sense regardless of whichever European country you are from – it’s a harmful, up lifting track and tonight’s rendition even featured David Hasselhoff sitting in a public mobile toilet and the South Korean singer received one of the loudest applause of the night!

After Pitbull was let off his lead ordering us to ‘Don’t Stop The Party’ the celebration continued with the Jonas Brothers, wearing their purity rings, handing out the award to the fans of Justin Bieber who would do anything to take their idol home with them and have their wicked ways with him. 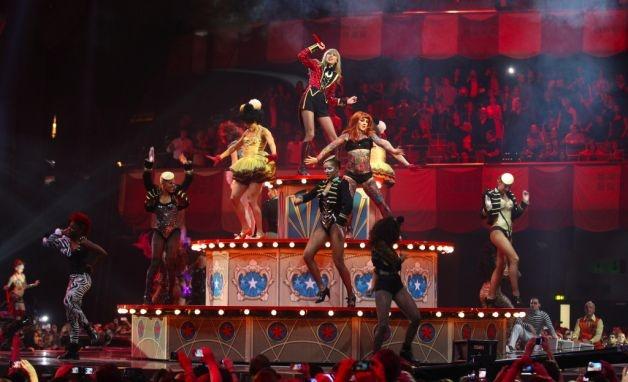 Despite our cynical outburst the night belonged to Taylor Swift who rounded off this year’s award ceremony with ‘We Are Never Ever Getting Back Together’ equipped with indoor fireworks.

The after show party upstairs was one of the most lavish showbiz events we have attended for years and the circus theme ploughed on into the early hours thanks to the attendance of a couple of clowns, otherwise known as Jedward.

As for the EMAs overall? The evening was unbelievable and the effort behind the scenes undoubtedly shone through. Everybody involved showed Europe how to really put on a phenomenal, jaw-dropping event and should win a Live Award themselves...Even Matt Bellamy and his mates couldn’t put on an awesome couple of hours like this and that’s saying something...well from our personal perspective at least!