Florence Cathedral dominates Piazza del Duomo, which is no surprise as the Italian centre’s English title translates to ‘Cathedral Square’.

Foundations for the Cattedrale di Santa Maria del Fiore (Cathedral of Saint Mary of the Flowers) date back to 1296, completed in 1436 by the largest dome in the world engineered by Filippo Brunelleschi. The record was broken as the centuries passed, although the rounded vault structure is still yet to be beaten by a bricked construction.

Simon Le Bon may not be no Brunelleschi but he is the architect behind one of the most popular bands of the eighties. Duran Duran have achieved remarkable success since they formed in 1978, fourteen Top 10 UK singles, 21 chart entries in the Billboard Hot 100, a couple of Brit Awards, a five pointed shape on the Hollywood Walk of Fame and tonight’s free open-air concert is the last one they will play before they receive the ‘Video Visionary Award’ at the MTV EMAs tomorrow night.

Warming up for the music Gods tonight is Ellie Goulding. Over the next thirty five minutes one of the most popular female singers of the decade will charm us with a nine songs cherry picked from her three albums. Ripe fruits such as ‘Love Me Like You Do’ and ‘On My Mind’ layer the fruit basket with preserved stone fruits ‘Anything Can Happen’ and ‘Figure 8’ buried inside. In-between numbers Ellie is the first to admit ‘I’m not very good at talking so I’ll keep singing’.

When unversed words do pass through her lips Goulding seems breathless, although despite her pants she continues to thank the ‘sweet’ crowd and admit she is a Duran Duran fan. The lungs are saved for the songs though which breathe the words to ‘Something In the Way You Move’ for the very first time in front of a live audience.

Goulding’s set is probably the nights highlight for any youngster in the crowd who associates ‘Rio’ with an animated film about a squawking mascaw, but for those who familiarise the Brazilian city with four young lads sailing a yacht in the Caribbean Sea the main event is just around the corner…

Similar to the cathedral’s dome Duran Duran were one of the biggest structures of the music industry, but as time passed the late eighties the cracks started to appear. Apart from the odd number here and there releases failed to reach the Top 10. There two offerings in 2011, ‘Girl Panic!’ and ‘Leave a Light On’ didn’t even chart. After a four year hiatus they are back, new album ‘Paper Gods’ includes their most catchiest track in years, ‘Pressure Off’ and sandwiched between a festival appearance at Bestival and a new UK tour Bon, Nick Rhodes, John and Andy Taylor are performing another era defying gig.

Concluding the week of concerts on the MTV World Stage in Milan this free gig is the most anticipated of the whole series lighting up the Piazza del Duomo in glorious colour.

Unfolding with their new track ‘Paper Gods’ Milan doesn’t has to wait long for two of the classics, ‘Wild Boys’ and ‘Dance Into the Fire’ to flame into action.

We are whisked back to 2013 for the View To a Kill soundtrack, the only Bond theme which reached poll position on the Billboard Hot 100 before Bon, Simon Le Bon announces how ‘Lucky we are to have a thirty five year career’. The frontman gives Paper Gods a mention before playing one of the new tracks, ‘Last Night in the City’ cryptically tweaked to suit their Italian surroundings.

Another new track ‘What Are the Chances’ proves one thing…The crowd are here for the bands purple patch. So it comes as a consolation they bring the album’s co-producer, Mark Ronson as they take the ‘Pressure Off’. 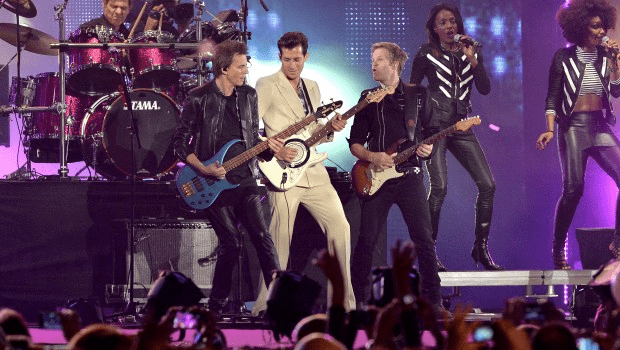 It’s a short set for such a legendary band, but when the hits are rolled out…’Notorious’, ‘(Reach up for the) Sunrise’ and of course, ‘Rio’ it’s obvious to see another parallel with their religious surroundings…Duran Duran’s modern counterparts may overshadow their current status, but the slabs which built their legacy remain intact and will do for years to come.