Kevin Rowland won’t forget his Reading appearance in 1999. The Dexys Midnight Runners star was booed off stage and pelted with bottles of urine after wearing stockings and a dress onstage.

Two decades on most of the world is now, thankfully, more accepting but for Matty Healy a return visit to Dubai is on the rocks.

Back on home soil the frontman received a warmer welcome last night when The 1975 premiered new tracks off their third forthcoming album, Notes on a Conditional Form, on Annie Mac’s show. The record is due early next year and tonight People and Depth will have their first live plays in front of a Reading crowd.

If record shops were still thriving today it’d be difficult to categorise their CDs (ask your dad, they were round things which existed in the nineties) as their new sound is much heavier and electronic than before.

Always ones to spread social awareness People asks us to take care of our planet, which as we will discover later has an important part to play in tonight’s proceedings.

But before we look out for the universe we need to look out for one another as fans start to go crazy when two bangers, Give Yourself a Try and TOOTIMETOOTIMETOOTIME, are thrown our way early on in the set with the latter seeing Matty giving his best boogie skills sandwiched between two dancers.

Whoever is sharing the stage with Healy it’s difficult to take your eyes off him, he’s so charismatic…and he knows it! He’s the type of lovable rogue who can get away with anything. Who else could headline one of the biggest festivals in the world wearing an oversized shirt, a tie inching down towards his waist and the baggiest trousers and pull it off?

“Ladies and gentlemen, give it up for the best band in the world,” the cheeky little bugger announces “the 19 fucking 75!” Yep, he knows how much the universe adores him!

Need further proof how popular his band is? Earlier this year The 1975 won Best British Group and Best Album at The BRITs. To celebrate they performed Sincerity Is Scary at the ceremony which saw Matty strolling a moving walkway in front of a backdrop displaying a block of houses smoking a ciggie. The set made into their world tour and is repeated again tonight, with that walkway coming in handy throughout the evening.

If they aren’t keeping up with a sliding floor Matty’s legs are being kicked up behind him as he plays It’s Not Living (If It’s Not With You) with massive reciprocating cube shaped blocks above his head.

“Hello boys and girls or however you identify yourself” Healy welcomes the crowd without a drop of piss heading his way or a single shout of disregard. He tells Reading he’s never felt so ‘affiliated by a crowd’ in his whole life whilst standing in-between a row of lights which, he jokes, was put there just for him using the same cocky yet loving charisma which propelled the likes of Robbie Williams to his global status.

The title of Love Me is pretty apt for the 30-year-old chap from Manchester, although the song reflects a very different picture to his stage presence focusing on the boundaries built between fans and successful artists once fame beckons. Meet Matty offstage and, trust us, you will appreciate what a down to earth affectionate guy he is.

Healy’s company will be shared by friends such as Nick Grimshaw and Rita Ora who are side of stage and gained entry to The 1975 inner sanctum backstage but for those less fortunate there’s always a chance Matty will engage with you during one of the band’s performances…and that is exactly what happened earlier this month in Dubai.

During the show Matty kissed a male fan which caused controversy in a country which still deems same sex relationships illegal. The sign of affection made headline news on gay lifestyle websites across the globe as well as the national press when the singer mentioned The 1975 may not be allowed back into the country because he branched the UAE’s anti LGBT+ laws, but he “wouldn’t have done anything differently.”

Healy told BBC News: “I really liked that boy and I am pretty sure he liked that kiss.” He added: “It is not me that needs to change, it is the world that needs changing.”

Fortunately things are changing, at the same festival where twenty years ago Rowland left the stage in tears, after he was alienated for wearing woman clothes, tonight hundreds of rainbow flags are swayed side to side when The 1975 perform Loving Someone on the same weekend a number of Pride events are held around the country.

From falling in love we come to break ups…A Change of Heart brings a sentimental vibe to the night. Ever since it was premiered in 2016, again on Annie Mac’s show, thousands of fans relate to the song which charts the stages of broken relationships. Although at least there’s one happy partnership as Matty is reunited with his moving walkway and another stick of nicotine dangling from his jaws.

“I can’t play Paris” Healy tells a disappointed fan “there isn’t time!” but despite the track not making the setlist there’ still some old favourites to come our way.

Favourites such as fallingforyou and I Like America & America Likes Me which follow the potential second unreleased track off album number four, Depth (working title) although it’s unsure if the instrumental song will make the record as it was fundamentally written for Reading & Leeds.

After starting the set with a social awareness number there’s a similar message on Love It If We Made it, this time it’s more blatant when the track is played after a short film warning us about the global warming crisis and how man is destructing the planet. (Doing there bit The 1975 have recently announced they won’t be releasing any new merchandise for ‘Note On A Conditional Form’ because it’s not “sustainable”.)

You may have noticed we haven’t mentioned the other band members (Ross MacDonald, George Daniel and Adam Hann) once in this review. This was purposely done after Matty, towards the end of the set, cheekily declared, “I’ve just headlined Reading!” Yep, he really can get away with almost anything!

After the night closes with three colossal crowd pleasures (Chocolate, Sex and The Sound) thousands of youngsters make their way back to their tents to share sleeping bags with whoever they damn well want and who knows, one of them may even be lucky enough to have a goodnight kiss from Matty!

There was an accessible toilet situated next to the check-in portacabin and a ramp for wheelchair users.

Accessible parking was next to the campsite which provided accessible showers, refreshment vans and accessible toilets.

Just a short walk away from the campsite was a dedicated route to the arena so you didn’t have to battle your way through the crowd.

All stages apart from the open air BBC Introducing one had at least one viewing platform, there were two at the main stage and BBC Radio One tent. They also had a sign reminding everyone ‘Not all disabilities are visible’.

The platforms situated for the main stage were tiered. Each platform gave a fantastic view of the stages and had charging points for electric wheelchairs.

Accessible toilets were located at all the viewing platforms and around the site which were very well secured.

BSL Interpreters were in operation for sets throughout the weekend including all headliners. A list of there were displayed on the viewing platforms, at the Attitude is Everything tent located in the accessible campsite and the BSL information tent.

Give Yourself a Try

It's Not Living (If It's Not With You)

I Couldn't Be More in Love

A Change of Heart

Love It If We Made It

The viewing platforms for the main stage is much bigger compared to the late time I came to Reading which is good and the staff are helpful.

However there aren’t enough accessible toilets on site or charging points in the accessible campsite. 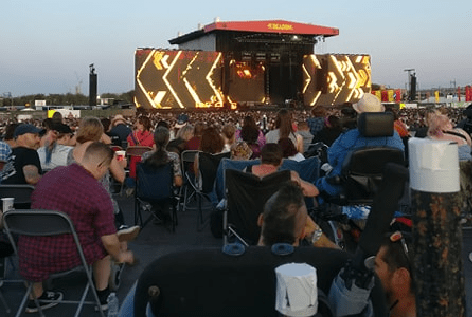