Amongst Richard Ashcroft’s record collection you’ll find works by The Beatles and The Carpenters. But there’s another piece of vinyl which sits in the ex-Verve’s musical delights.

Supporting Roger Waters on this summer Friday evening at BST Hyde Park Richard tells London he owns pieces of work by the man himself who went solo in 1984 after being the co-founder of the world’s most popular progressive rock band Pink Floyd.

In 1977 Algie floated unplanned from one of the chimneys of Battersea Power Station as a promotional stunt for Floyd’s ‘Animals’ album. The sow, named by Waters, would become a protest emblem. Thirty years later a floating pig sailed above the crowds at the Milwaukee Summerfest with the words “Impeach Bush” taking a swipe at the then controversial president…You can see where this is going can’t you?

Before we put our head in the clouds with American politics let’s keep our own feet on the ground for the next couple of hours to welcome the winner of the O2 Silver Clef Award, which he collected a mere few hours ago at a ceremony just across the road, and one of the last remaining British music icons to the capital’s most prestigious park.

The ‘Them + Us’ tour was named after Pink Floyd’s ‘Us and Them’ track off ‘The Dark Side of the Moon’ and Barack Obama’s speech on immigration reforms which attempted to turn America away from an “us and them” perspective. If you think about it, it’s quite a coincidence that for a band so connected with American politics they would go on to release a global selling record called ‘The Wall’!

Apart from four numbers the show, broken into two sets, everything we hear tonight will be songs taken off various Pink Floyd albums – most of which will have an animated film played out on the screens. But this is no Disney movie.

The instrumental One of These Days shows footage of a march with handcuffed protestors, it’s a harsh contrast to what the song was originally about when back in 1971 it took aim at BBC Radio DJ Jimmy Young because the band didn’t like how he used to talk rubbish for hours…Mind you, that was before the days of Jo bloody Whiley!

Ticking clocks wind through Time which was composed to remind us how quickly life slips through our fingers and a bloody scene of heads falling off bodies turning into bare skulls ‘happily’ takes us through the whirring cogs of Welcome to the Machine.

The film to The Last Refugee – one of Waters’ solo tracks – is not only more hard hitting but also straight to the point with old-style radios and a rag doll being washed up on the beach directed by Sean Evans. The song starts with a weather forecast radio announcement before tuning into the last day on earth where the only survivor is a refugee.

The first set starts to wind down with Wish You Were Here – which covers the theme of loneliness after Water’s friend Syd Barrett left Pink Floyd suffering from mental health problems and The Happiest Days of Our Lives. The latter, about how Roger’s teachers would humiliate pupils gives a pretty good clue on what’s coming next as the children from Grenfell Community make their stage debut to provide backing vocals for Another Brick in the Wall. Pink Floyds only chart topper and undoubtedly their most well know the song attacks the education system.

Set two opens after a twenty minute interview with a reincarnation of the Battersea stunt, only this time Algie is scaled down to an animation form, well for the time being anyway. However her presence pays an important part through Pigs (Three Different Ones) as Roger and his band wear plastic snouts holding up banners reading messages such as ‘Pigs Rule The World’ and ‘Fuck the Pigs’. The comments are directed at Donald Trump.

The POTUS is directly referenced through Money as an inflatable pig is once again let loose into the night sky in front of the screen plastering quotes from Trump before the message ‘Trump is a Pig’ is printed in big bold capital letters.

It’s a perfect time to include Us and Them into the setlist before Waters plays his final solo song of the night about how humanity puts greed before beauty….The track – Smell The Roses – is off his most recent studio album ‘Is This the Life We Really Want?’, which is probably another gem one would stumble across in Richard Ashcroft’s record collection.

The penultimate track Eclipse sees an inflatable glitter ball swaying across the crowd, evil laughter coming from the speakers situated half-way back from the stage which is dazzled by coloured lights before Roger ends unsurprisingly with Comfortably Numb.

Waters set may have come to a close but his piggy has yet to finish her job. A design company has acquired the rights from Roger to install four giant inflatable swines’ over Chicago’s Trump International Hotel and Tower later this year and Sadiq Khan has recently given the go-ahead for a Donald Trump baby balloon to fly over Trafalgar Square when the president visits the UK.

Trumps response? It’ll probably just to be to put another brick in the wall!

Roger Waters Setlist: Breathe, One of These Days, Time, Breathe (Reprise), The Great Gig in the Sky, Welcome to the Machine, Déjà Vu, The Last Refugee, Picture That, Wish You Were Here, The Happiest Days of Our Lives, Another Brick in the Wall Part 2, Another Brick in the Wall Part 3, Dogs, Pigs (Three Different Ones), Money, Us and Them, Smell the Roses, Brain Damage, Eclipse, Comfortably Numb

Accessibility at BST Hyde Park: Before you even set foot in the festival the access is already set at a high level with large illuminous message boards pointing you towards the dedicated accessible entrance.

Once inside it’s a short journey to the check-in desk to collect your pre-ordered ‘Accessible platform’ wristbands’ and ‘Accessible Companion’ laminates so you can pick and choose who your Personal Assistant will be at any time during the day.

Bars around the site and the VIP area offer a designated service area with a lowered counter and avoiding the queues.

The spacious platform is directly in front of the VIP grandstand so it’s in the shade and throughout the day you could order drinks through a waitress service.

BSL interpreters were on hand signing most of the acts with their faces, and most importantly their hands, projected on the screens either side of the main stage.

Smoking was permitted on the viewing platform and a sign warned some performances may contain strobe lights and loud sound effects.

Accessible toilets and changing rooms were situated around the site, VIP area and a secure compound next to the viewing platform.

View from the Accessible Platform for the Great Oak Stage: 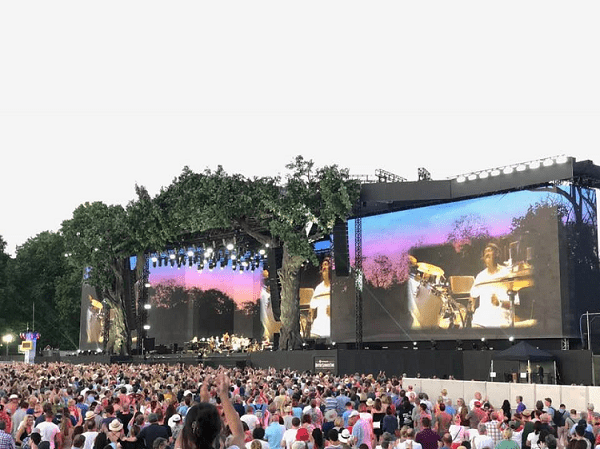