We are back at the amazing Isle of Wright festival, our annual sail across the Solent for one of most enjoyable weekends of the summer which, fifty years ago saw an epic set from Bob Dylan, his first live performance since a serious motorcycling accident.

Back then Frank and Louise Ashcroft were childless, but three years later their first and only son Richard was introduced into this world and we wouldn’t be surprised if he popped out wearing a pair of sunglasses and a hit song whirling around his tiny head.

Tonight his friends and family can expect Richard to be gracing the main stage earlier as planned after Jess Glynne pulls out at the last minute. The singer blames her no-show on anxiety although it later emerges she was partying into the early hours with the Spice Girls at Wembley Stadium to celebrate her support slot on their UK tour.

Ashcroft of course is no stranger to late nights, his height of fame pinnacle was fronting The Verve throughout the nineties and being best buddies with the Gallagher’s, but today, being a dad of two and conquering depression in 2006 the only way he spices up his life nowadays is being a family man and following his beloved team, Manchester United.

It’s a short set – fifty minutes – so there isn’t much time for chat. He’s straight in Sonnet and a quick introduction where he tells the crowd it’s a ‘Great pleasure to be here’.

His backdrop has no thrills, which is a good thing considering the unexpected quick turnaround which saw the crew scurrying around moving Glynne’s set off the stage and replacing it with a large banner of Ashcroft holding a guitar one handed above his head.

After a second Verve song, History, Ashcroft plays his first solo outing which dates back to 2000 and sees the Island going more ballistic than a Tory MP campaigning to hold the keys to No. 10 – just goes to show what a bloody epic track A Song for the Lovers is, despite being almost a couple of decades old.

A quick swig of a drink, we suspect nothing alcoholic, is followed by C’mon People (We’re Making It Now and The Verve classis The Drugs Don’t Work which ‘kicks in’ halfway through when the slight sound problem is restored.

If life had offered an alternative path Richard would be playing on a pitch instead of the stage, growing up the Wigan boy was obsessed in becoming a professional footballer after playing in a local team and idolising George Best. Although as the years passed Ashcroft’s attention turned to scoring chart positions instead of balls in the back of the net. Earlier this year he achieved the rock star equivalent of winning the Champions League by picking up an Ivor Novello Award for Outstanding Contribution to British Music.

Accolades such as though are few and far between, but when you hear tracks such as Hold On (taken from the These People album) you understand why people such as Chris Martin calls him “"the best singer in the world”.

He’s knocking 50 (Richard is 47) so you forgive his slow movements, such as wandering around the stage and rhythmically tapping away to the music – but it suits him and in fairness this Oasis persona has been in operating back in the days when lads mags were a thing and the NME was a page-turner.

‘Here’s another song taken from the (These People) album,’ Ashcroft pre-empts before playing They Don’t Own Me. Both tracks failed to reach the Top 100 when they were originally released in 2016 and as for the singles off his last album, Natural Rebel – they failed to chart but of course Rich still has a string of classics thanks to his past bandmates.

‘This next one is called Lucky Man,’ he tells the crowd which sees new generations and old singing the first word to the last until Ashcroft holds his guitar skywards mirroring his picture behind.

The set closes with Bitter Sweet Symphony which he now has the rights to following a long fraud with the Rolling Stones, as revealed when Richard collected that Ivor Novello award back in March.

Granted he doesn’t move like Jagger, as we already assessed and it’s unlikely his set will be remembered in fifty years’ time like Dylan’s but at least you can count on RA to turn up if you book him for a festival!

The accessible facilities at IOW have vastly improved over the past few years.

The disabled campsite is now situated actually inside the festival ground next to a spacious car park.

Campers are greeted by friendly and helpful volunteers who take you through the facilities upon arrival.

There are posh toilets in the camping field for PAs and those who are agile to use them and spacious accessible showers which are some of the best we have seen at UK festivals as well as a MCU changing room.

Volunteers were on hand to help with the tents.

The viewing platform at the main stage was extremely spacious, although you need to bring your own chairs and just a short walk from a car park for access day guests.

Charging points for wheelchairs were available in the disabled campsite.

The videos which played on the big screens at the main stage between acts had subtitles.

There’s now two viewing platforms at the Big Top towards the back of the tent. 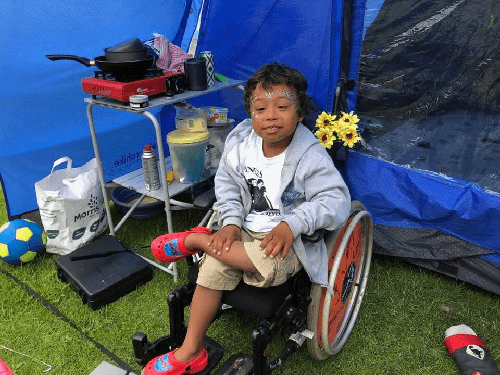 Shaun and his family from Birmingham.

The accessible facilities were amazing, the distance from the festival, the toilets, the showers…everything! Especially the staff who couldn’t be more helpful and understanding.

We will be back and thanks so much to the organisers! 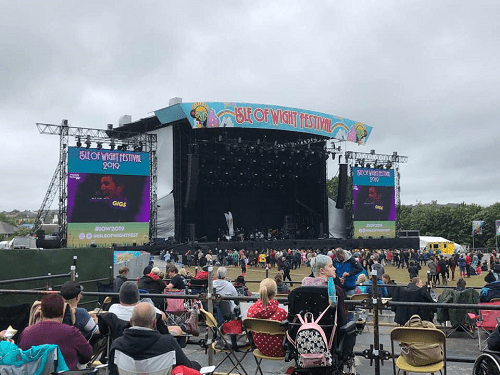