For the majority of the crowd facing at Cool Britannia 6pm on a Friday meant sitting in front of the TV during the nineties watching Chris Evans introducing T.F.I Friday.

Then nicknamed the ‘Ginger Winger’ Evans was a zany, wacky presenter causing mischievous on the airwaves after a million pound deal secured him as the Radio One Breakfast Show host. Chris was at the forefront introducing BritPop to the wider audience by shunning the station’s mainstream playlist and bringing the new wave of Indie to millions of listeners as well as buddying up with the artists, one of which was his best mate Simon Fowler.

His friendship with Ocean Colour Scene’s frontman saw the band lending their Riverboat Song as T.F.I’s theme tune which began as an aerial view descending to the TV studios in Hammersmith.

Such a bird eye perspective over Knebworth Park this weekend would show hundreds of middle-aged music fans reliving their student days listening to their own personal soundtrack of university eras. Bands such as Cast, Space, Dodgy and Happy Mondays bring back memories of late nights, revision and stolen traffic cones.

One young sprite yet to enjoy their higher education journey is Casey Cradock who’s playing table football in the artist marquee. His dad Steve is busy warming up guitar skills just down the corridor with the rest of the boys, but young Casey has more work to do tonight other than passing the ball pass the goalie.

The band’s hour-long set starts with Profit in Peace, with lyrics such as ‘And all these who are in foreign lands, Don't wanna fight no more’ the words are as relevant now, if not more so, when we first heard them in 1999.

The number which kick-booted their career, Riverboat Song is followed by a quick “Hello Knebworth” by Fowler, two words he’s hasn’t been able to say for 22 years, before The Circle takes us back to heading down to HMV and paying for the Moseley Shoals CD which we read about in Melody Maker.

“Last time we played here we were warming up for Oasis! Simon reminds Knebworth, it’s a pretty strong bet most of the mum and dads here watched Noel and Liam play there monumental shows here in 1996.

Unlike the Gallagher’s Ocean Colour Scene have stayed together after two other bands, The Boys and Fanatics, parted ways in the early nineties. At the start OCS didn’t have the start they deserved after their now defunct label Phfftt was overshowed by Phonogram records. Salvation came by Paul Weller who invited the band on tour forming a friendship with Cradock who has now become a staple member of the Modfather’s crew.

When he’s not playing for Paul Steve is playing guitar for timeless tracks such as One For The Road and July, the latter sees Simon turning to his band waving his hands in the air as a composer would control their orchestra…We hope Casey is taking note side of stage!

“This is a new festival,” notes Fowler. “Whoever put it on….it’s proper!”

When the band started festivals were few and far between. Apart from Glastonbury and Reading youngsters had to find alternative methods catching pneumonia other than sleeping in tents for a whole weekend. Of course the climate has changed, print is becoming a thing of the past with the aforementioned publications now a distance memory and music shows shunted to channels devoted to showing reels of videos on repeat, but the festival scene has expanded – although because of the vast variety new events such as Cool Britannia is competing in an overcrowded market, hopefully it can survive.

Just like the festival’s promoter OCS are determined to carry on, although it’s been a while since we’ve heard new material from them…In fact their last single was released in 2013. So when Simon introduces ‘new tracks’ such as Drive Away and Up on the Downside the description does come as a bit of a surprise as both numbers came out in the early noughties…However, we are told the guys have been working on a new EP.

The boys, who now manage themselves, continue their headline slot with “A song from a Birmingham band who have been together for almost thirty years”….Que a field-full of parents singing along to Better Day.

After something we all know, You’ve Got It Bad and something which was never released from the Marchin’ Already album, Get Blown Away the Mosley lads lift the mood with Travellers Tune…You know the one, the song which starts ‘But if you find yourself standing on the corner”? Yeah that one!

Standing in the corner right now though is Steve Cradock’s teenage son. We don’t know if he won at Table Football earlier but he wins Cool Britannia over as he plays guitar next to his dad for the bands final two tracks…Hundred Mile High Club and The Day We Caught The Train.

If only the good old days could return. If only we could wake up to a zany, wacky middle-aged radio presenter with an ear for new music. What’s that? Chris Evans has just left Radio Two and launching a new breakfast show on Virgin Radio next year? OCS – Your second coming could just be around the corner!

Accessibility at Cool Britannia: Despite the potential access at the festival wasn’t up to standard.

The accessible campsite was situated very near the main entrance, but unfortunately just a few yards away from the Ministry of Sound dance tent which was blaring out tunes until 1am.

Accessible parking was not signposted well. The area was behind a wooden fence which divided the car spaces and the accessible campsite which meant you had to carry your equipment round to the area. Ironically the gap between the car park and the campsite had been blocked by wire fencing.

There accessible campsite was just a cornered off pen in the standard campsite. There was no security and the staff from Festaff who were in charge of manning the area were nowhere to be seen so there was nobody to ask for help.

A portacabin which was meant to be for available for charging electric wheelchairs and storing devices such as oxygen equipment remained locked for the whole weekend.

There were two accessible showers which were spacious. But you couldn’t control the temperature (although they were warm) and one of the cubicles had a step leading up to it.

Visitors using the facilities had a ‘Viewing Platform’ wristband for each day and a ‘Disabled campsite’ wristband the same as their PAs.

The bars inside the arena had a dedicated serving area for disabled guests…but this was situated on the opposite side of the viewing platform.

The viewing platform had a piece of the wooden surface sticking up which hadn’t been nailed down properly and you had to bring your own chairs. 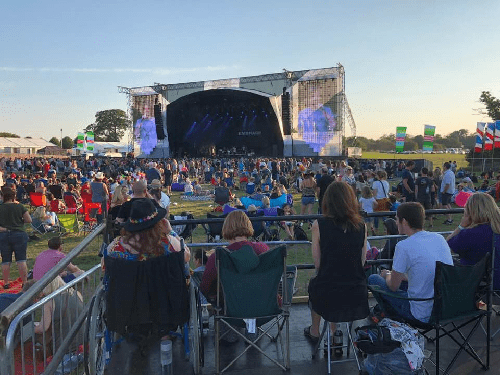