When Destiny Hope Cyrus used to stage house parties studying at Williamson County’s Heritage Elementary School there was probably an overcrowded kitchen, a stained carpet and a couple getting off with each other upstairs in the locked bedroom upstairs.

Vacations would be spent with her Christian parents in Tennessee, Billy and Leticia would ensure their precious teenage daughter would wear a purity ring to warn boys she was a strong believer of no sex before marriage and, heavens above, she would never insinuate any such activity to others.

Um, let’s fast forward a decade or so and find out how the strict religious upbringing has materialised shall we?

To give Miley (she changed her name in 2008) her dues she seems to be sticking to the BBC protocol, giving the impression there will be no swearing in front of the crowd at this year’s Radio 1 Big Weekend in Middlesbrough when she walks on stage to headline the Saturday night, which is probably a huge sigh of relief for the organisers after her behaviour on a previous tour – we will come on to that a bit later.

Last night the party goer gate-crashed Mark Ronson’s set and played Nothing Breaks Like a Heart, which the two have collaborated on for her new album, although sadly the DJ hasn’t returned to repay the favour when Miley opens her set tonight.

Her performance this evening will reach millions, not only will the numbers be played on the national radio station, within the hour her gig will be broadcast in full on BBC Two.

The reason for the short delay opposed to a live TV recording may have something to do with the fact Miley can be controversial. The opening film which preludes her set tonight shows Cyrus seductively eating fruit…Could she be popping a few cherries when it comes to teaching the young children in the crowd a wider, colourful, vocabulary?

The press had a field day reviewing her Bangerz tour in 2014 when she dropped the F and C bombs within the first couple of minutes, told the young crowd she hoped they were on drugs and encouraged the kids in the audience to snog somebody of their same sex, as you can imagine the Daily Mail went to town on that one!

Today, five years on and in a more liberal world Cyrus is on ‘better’ behaviour. She has a new album to promote which drops this Friday and with a global audience what better time can there be to debut three tracks off her new piece of work and play a family friendly set?

First newie is Mother’s Daughter which includes the words: Must be something in the water or that I'm my mother's daughter, Don't fuck with my freedom, I came back to get me some, – So, um, not quite a PG song after all!

Up next is Cattitude which include the lyrics, Turn up your gratitude, Turn down your attitude, I love my pussy, It means I got cattitude

And to round off the trio of new songs there’s D.R.E.A.M – a lovely little sweet lullaby to send kiddy winks off to sleep? Not quite, the initials stand for Drugs Ruled Everything Around Me!

For those who missed her teaming up with Ronson last night there’s a surprise tonight when Charlie XCX joins Miley tonight for We Can’t Stop and Cyrus having a go and covering Dolly Parton’s Jolene, to give Cyrus credit she has an incredible voice but tonight’s set seems a little sparse and bare when it comes to props.

Yeah she has oversized speakers and for the final few numbers she performs on top of a huge stereo system, but apart from that the set isn’t very special or memorable for a diva of her status making a nationwide comeback.

With those student house parties a distance memory Miley’s smash hit Party in the U.S.A crashes into the set encouraging thousands of fans in the arena to cram together, spill their drinks over the ground and cop off with their partner/ new Tinder match without the need of a bedroom lock.

There’s two numbers left, Can’t Be Tamed – which hasn’t had a live outing since 2014 and of course Wrecking Ball which sweeps in smashing the set short by ten minutes and causing chaos for those poor BBC producers who are about to put Miley’s set out on the Beeb.

So basically a performance featuring foul mouthed language and drug references which finishes earlier than promised. Miley it’s bloody good to have you back girl, just a quick question though…Whatever happened to that purity ring?

Access customers had their own entrance and exit to the event situated next to the main stage and on the other side of the site where the general admission was located. It was an ideal spot and provided one of the easiest routes we have ever seen at a festival.

Just a few metres from the accessible entrance, across the road was a spacious car park for access customers and for those who found it a bit too far to walk there was a drop off/ pick up point opposite the pedestrian entrance.

There was a well-managed check in desk to collect accessible wristbands (paper ones on Saturday and plastic ones on Sunday) along with PA wristbands.

BSL interpreters were on hand throughout the event for popular sets.

Unfortunately security allowed non-disabled customers to use the accessible toilets on both days causing blockage and broken toilet seats. An extra two had to be installed on the Sunday. One reason for this was because the field was closed after the second tent became rammed for Stormzy so the crowd couldn’t reach the public toilets. 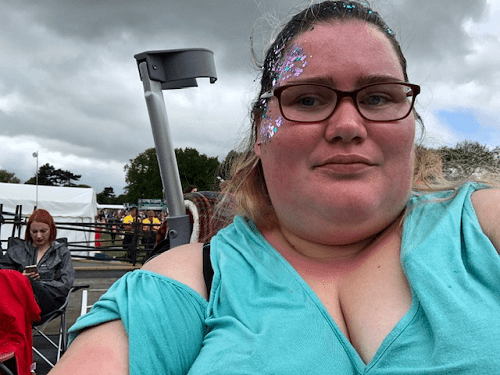 ‘Generally the access was good but the biggest problem was being let in after the main entrance had already opened meaning we were at a disadvantage to non-disabled people and the lack of accessible toilets on the first day wasn’t great either’. 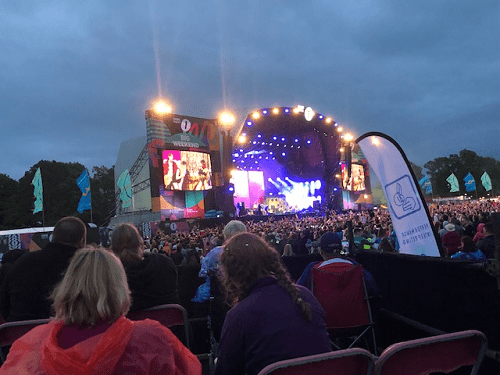 D.R.E.A.M. (Drugs Ruled Everything Around Me)