We are in the production office at V festival. One of the key team members has just replaced the phone back on the hook and despite the news, that tonight’s headline act has pulled out a few hours before stage time, the crew remain calm.

Within minute’s websites – social media wasn’t a ‘thing’ in 2009 – carry the news that Liam Gallagher has viral laryngitis but as things unfold it marked the beginning of the end for one of the biggest bands in music history.

Time changes. V festival is no more and the Gallagher brothers have gone their separate ways. Noel launched his High Flying Birds, but for Liam he flapped around with his new band Beady Eye which never took off in full flight.

However, on 26th July 2015, Liam flew solo making an appearance in an Irish pub although six months later he announced he had no plans for a solo career.

Today we are at RiZE, the festival is situated on the same site where V took its final bow twelve months ago at Hylands Park in Chelmsford…And guess who’s playing a year into his solo career?

Liam’s set is heavily focused on Oasis tracks with only five off his solo album and a Beady Eye number – Soul Love – thrown in half way through. But something is missing.

Truth be told we have been looking forward to reviewing Liam all summer since we saw him play the Isle of Wright festival. There, and all the other times we’ve seen him throughout the summer, he couldn’t last a few songs without playing with the crowd, slagging off Noel, using the stage as a soapbox and of course expletive language…But tonight there’s little time for that.

‘I’m the best you can get. Remember that’ is the only egotistic slur we have at RiZE dropped in between the opening numbers – Rock ‘n’ Roll Star and Morning Glory.

The ‘best’ has had a good start this time around. His debut solo album, ‘As You Were’ reached number one and became the ninth-fastest selling debut of the decade. Although the two tracks so far released off the record – Wall of Glass (played tonight) and Chinatown – have failed to reach make a dent in the top twenty. Mind you, in fairness, Noel has only managed this twice since releasing his first solo track in 2011.

He doesn’t seem on top form either. This may be because Liam has a huge headline show tomorrow in Manchester playing for HIS crowd, but with family ties to RiZE you would had thought our kid would had put a bit more effort into it tonight.

‘Not been bored out your minds today have you?’ Gallagher asks Chelmsford before Bold (off ‘As You Were’) it’s quite a surprising dig at the new event, especially as the sister to Liam’s wife – who is also his manger – is running PR for the two-day event.

Helping the journalists along now and again Liam will literally introduce his numbers, for example ‘This song is called For What It’s Worth’ it’s a line which, deep down, he probably didn’t expect to say anymore to a field-full of people after the spilt.

The reason Liam gave for cancelling V in 2009 was put into doubt after Noel said his brother was suffering from a hangover. Liam threatened to sue and released the statement: "I want Oasis fans, and others who were at V, to know the truth. The truth is I had laryngitis, which Noel was made fully aware of that morning, diagnosed by a doctor."

Noel apologised and the case was dropped, but a week later backstage at the Rock en Seine festival Liam lost his temper at his brother, picking up Noel’s guitar and ‘wielding it around like an axe’. Their set was cancelled along with another date at the I-Day festival. This time it was Noel’s turn to address the public as he issued his statement on the bands website which told their fans: It is with some sadness and great relief...I quit Oasis tonight. People will write and say what they like, but I simply could not go on working with Liam a day longer.’

Liam went on to form Beady Eye, but after a lukewarm reception the band spilt in October 2014 after two albums.

For Oasis fans still yearning for that doubtful reunion the rest of the set brings seven Oasis songs, but once again little banter in-between.

Before his last solo outing – which comes in the form of You Better Run – Liam just stands there muttering ‘Yeah interesting. Interesting’. The next number is prefixed by the words: “This song is called Supersonic”. Where’s the rage? Where’s the digs? Where’s the fooking fun between the banging tunes?

Finally the Liam we all know and love raises his cheeky head when he spots a young lad in the crowd. ‘This song is called Cigarettes & Alcohol and is dedicated to the little guy over there on that guy’s shoulders‘ says Gallagher, pointing to a child who probably has a more controlled temper than himself. “Your dad probably gonna steer clear of all this shit. But by the looks of it he’s had too much of it anyway”.

Classic Liam! A 45-year-old who rarely shows his softer side in public but over the next twenty four hours he will do just that. His final song before the encore sees Gallagher dedicating Live Forever to soul legend Aretha Franklin in front of her portrait, a day after the music industry lost one of its brightest stars. Tomorrow night Gallagher will be joined on stage by Richard Ashcroft as the two pay tribute to the victims of the Manchester bombing which just goes to show, despite his cocky persona, his foul mouth and throwing guitars around his head Liam has a huge bloody heart pumping inside him.

Before rounding things with last Oasis track of the night Liam makes his second unnecessary remark of the night…”Sorry if I’ve bored you to death” As the screens capture 30,000 people singing every word to Wonderwall it’s clear that he certainly hasn’t!

Despite the lack of crowd interaction Liam has come up trumps once again. It’s been a long wait to hear these songs played out from the Chelmsford stage – nine years in fact – but it’s been worth it!

Liam Gallagher Setlist: Rock 'n' Roll Star, Morning Glory, Greedy Soul, Wall of Glass, Bold, For What It's Worth, Bring It on Down, Some Might Say, Soul Love, You Better Run, Whatever, Supersonic, Cigarettes & Alcohol, Live Forever, Wonderwall

Accessibility at RiZE: The accessible campsite at RiZE was quite small and narrow although it managed to provide enough adequate space for everyone.

If you arrived early you could pitch your tent next to wooden benches and seats as these were permanent at Hylands Park.

You had to be fairly careful as there were a few bright lights around the accessible campsite which were switched on all night.

Accessible toilets were located in the accessible campsite and around the site. There were also accessible showers in the campsite.

Standard showers and toilets were situated in the accessible campsite for non-disabled people.

Accessible wristbands were given to people with physical and hidden disabilities. PA’s also had a wristband.

If there were more than one person accompanying a person with a disability they were given a wristband which permitted them access to the accessible campsite.

There was a bag check in operation around the accessible campsite.

Viewing platforms and accessible toilets could be found at every stage. They were clearly signposted and gave a great view.

The viewing platform for the main stage was tiered and ideally placed in a quiet area which made it easy to reach without going through the crowds. 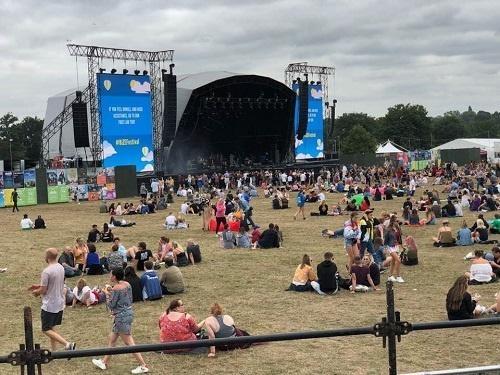