A few hours ago Sir David Attenborough addressed the masses when he took to the stage announcing “Now this great festival has gone plastic-free. That is more than a million bottles of water have not been drunk by you in plastic. Thank you! Thank you!”

The naturalist’s words were heard by millions, not just the lucky ones who managed to buy a ticket to the world’s greatest music event.

Glastonbury isn’t just a British institution, the festival is watched across the globe.

To prove the point we know for a fact there were a group of music lovers huddled around a TV set fourteen years ago on the other side of the world watching the likes of Coldplay, Basement Jaxx and The White Stripes headline the Pyramid Stage which saw the Sunday afternoon legend slot being filled by Van Morrison.

Joining the likes of Van the Man, ELO, Dame Shirley Bassey and Neil Diamond – who have all played the prestigious billing - is Kylie and not only did she smash it out of the park, the global superstar broke the record for the biggest crowd at Glasto on a Sunday afternoon.

Her performance is broken into four acts which is launched by three bangers…Love at First Sight, I Should Be So Lucky and On a Night Like This. Pretty incredible when you realise the second track dates back to 1988, we have grown up with Kylie ever since Charlene Robinson became our new ‘Neighbour’ in 1986 and for the older generation her first acting role in The Sullivans when she was just eleven years old.

Her dancers, which of course are extremely important to any Kylie set, are swaying the letters to her name on stage in time to the crowd who, as the princess of pop points out, are wearing some ‘good looking outfits out there!’

‘I can see you all’ Minogue shouts to the insects on top of the hill.

Act two opens with ‘un danseur’ as we grab the strangers next to us, who also didn’t get the memo, to boogie away to Je Ne Sais Pas Pourquoi, and Hand on Your Heart. It isn’t uncommon to catch Glastonbury experiences for posterity and that goes for the performers too.

Kylie tells us she’s taking a ‘panoramic shot’ of the crowd, something the singer has been waiting to do for a decade and a half…At long last she can add the photo to her collection of moments which include a Grammy, three BRITs, four MTV awards and a Guinness World Record for achieving top five consecutive albums in the UK.

So we didn’t get the memo, the accessible platform didn’t get the memo…in fact the only people to receive the heads up were a few rows down the front as they pluck a red rose out of their ‘good looking outfits’ to wave side to side when Nick Cave joins Kylie for Where the Wild Roses Grow – it’s a special moment as she hasn’t played the song live on tour since 1995.

Another song which has never been played on the Pyramid Stage – at least by the original artist – is Fashion. The song was left off Bowie’s setlist when he played here in 2000. But there’s samples of the track in Act III when Minogue plays Slow behind her dancers wearing some of the most abstract outfits ever since in music since Bjork dressed up as a swan and Lady Gaga butchered half an abattoir. It’s a sight usually reserved for New York Fashion Week – let’s just hope none of the clothes have any traces of plastic as a certain Mr. Attenborough wouldn’t be too pleased!

As the screens turn black and white we are whisked down the Rabbit Hole (subtle Glastonbury reference!) back to 2000 for Kids, unfortunately there’s no surprise performances by Robbie Williams but don’t worry…There’s somebody quite special waiting in the wings.

But before somebody else joins her it’s time to address that group of people over in Australia who were watching Glastonbury on TV in 2005…One of those viewers was Kylie.

The six words are followed by the global singer fighting back tears as she talks about her breast cancer which stopped Kylie becoming the first female to headline Glastonbury.

"Circumstances meant I didn't make it. I was watching in Australia wishing things had been different but life is what it is.

"We're all here in this moment.

"It always dawns on me about my story, and not only that by our story. It's 30 years of stories.

"Back then when I was watching some of the artists who covered my songs. That is the spirit and gracious nature of Glastonbury and people I guess.

"I asked one of those people if he would join me in this momentous moment and sing that song together.

"He said 'alright i'll come and play in the band'".

As teardrops replace raindrops on Pilton Farm on this warmest Glastonbury on record Chris Martin joins Kylie on stage to perform Can’t Get You Out of My Head to bring the penultimate act to a close.

The Coldplay frontman was barely into double figures when Jason Donovan teamed up with Kylie in 1988 to record Especially for You which sees a mock wedding on stage as a lucky dancer catches the bouquet.

Ms Minogue runs up to the groom telling him ‘So, you’ve just got married. So it’s time to party’ and the first dance sees thousands of fans and devotees take to the dancefloor for Shocked followed by Step Back in Time.

Inflatable matchstick dancers – which were so impressive we think they should be a YouTube sensation in their own right – allow the cool breeze jig their plastic (don’t even go there!!) dancing shoes off to Better the Devil You Know before Beelzebub is tied to the tracks and stream-rolled to smithereens by The Locomotion.

The gay icon continues her set with rainbow coloured confetti and invites us all to go Dancing and Spinning Around.

Sir David Attenborough told Glastonbury earlier the importance of cutting down on plastic, but when it comes to saving Planet Pop there’s not many who can top Kylie Minogue. Maybe she wasn’t the first woman to headline Glastonbury, but you know what? Fate has cemented her as one of the festival’s legendary performers!

Everywhere you look around the site you aren’t far away from an accessible sign or access facility which is pretty impressive when you consider how vast the site is.

Every stage has a viewing platform and accessible toilets and the accessible campsite isn’t too far from the Pyramid Stage.

The viewing platform at the Pyramid Stage had an ‘add on’ area reserved for those who made use of the BSL interpreters from DeafZone, who were celebrating their tenth year partnership with the festival.

As the weekend was so hot there was a shaded area erected at the Pyramid Stage viewing area on ground level.

Despite the area becoming busy – especially for Kylie – stewards managed to accommodate almost everyone who wanted to have access wearing the correct wristband and their PA’s who were given a laminate allowing the access guest to circulate their choice of +1 throughout the weekend.

Access guests also had entry to the guest area which had accessible routes to the Pyramid Stage and around the area itself.

View from the accessible platform for the Pyramid Stage 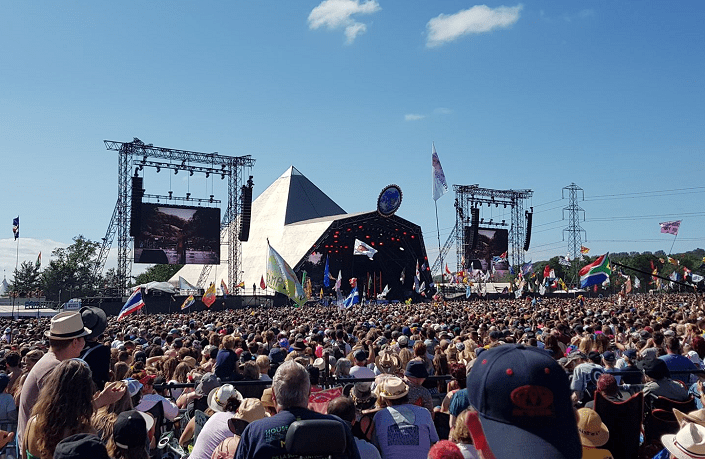 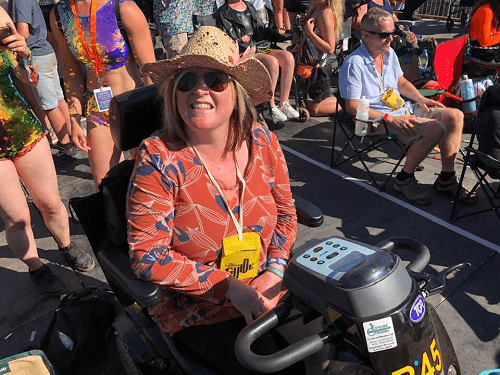 There were some excellent stewards and we have been able to get to the platform ok, but some stewards didn’t seem to know the access routes.

The stewards operating the viewing platforms were not always sticking to the plus one regulation.

The short cuts seemed to be VIP routes and general people who have certain coloured bands so I have been battling through crowds.

There needs to be more viewing platforms with direct access from main walkways.

I Should Be So Lucky

Hand on Your Heart

Where the Wild Roses Grow

Can't Get You Out of My Head

Step Back in Time

Better the Devil You Know