On the night Lamar won six categories including the video of the year for HUMBLE. What followed was a whirlwind of dates across the globe including sold out nights at The O2 in London scheduled around his somewhat controversial performance at The BRITs where he appeared to be smashing up a brand new car inside a glass box.

Tonight, with his tour bus thankfully remaining in one piece backstage, Kendrick is scheduled onstage at 10pm to headline Reading Festival. Although a fifteen minute delay means his set only clocks in at just over an hour and for an artist who has four albums behind them you would had thought the tracks would be crammed in.

However, thanks to a film thread throughout the set – which follows the adventures of ‘Kung-Fu Kenny’, a storyline around Lamar learning Chinese Martial Arts – Trials and Tribulations & Every Nigger Is a Star played in on tape as well as some pauses between one or two tracks, some fans may have wandered back to their tents feeling short-changed.

For the time Kendrick performs though, dressed in an orange suit which bears comparison to a convict uniform (you need to take our word for it as photographers were banned from taking pictures of his set), it’s exactly what this year’s diverse line-up is crying out for.

As he spreads his DNA the words ‘Pulitzer Kenny’ scrawl along the screen behind Lamar in reference to his achievement back in April when the rapper won the Pulitzer Prize for music becoming the first non-jazz or classical musician to win the predigest award.

ELEMENT follows as flames ignite from the stage before our man acknowledges his people. “Is everyone alive right now?” he asks the young crowd. “Reading. You having a fucking good time or not?”

Apart from sounding like a teenager’s favourite swear word King Kunta remembers a fictional eighteenth century slave called King Kinte in a novel refusing to accept the name “Toby” he was tarnished with by his masters. Toby, sorry Kinte, ended up having his right foot chopped off. The song, which sees thousands of intoxicated festival goers awkwardly using their two left feet, includes the line ‘King Kunta, everybody wanna cut the legs off him’. It may be a fable, but following a short clip highlighting police brutally in America it’s a sad fact that Alex Haley’s story is as relevant now as when it was published in 1976.

Okay, we won’t dwell on about history. Most of the guys and gals out front have just received their GSCE results and Schools still out for summer. So, as Kendrick notes, it’s time to “Take us to the next level” and “Put two hands in the air” for Big Shot.

It’s the first of two consecutive tracks – the second being ‘goosebumps’ covered by Travis Scott, who untimely played Reading yesterday.

After the cover of ScHoolboy Q’s Collard Greens Kendrick wants to know “If I have some fans here from day one?”…Cue huge cheers from those in procession of his debut album Section.80, although we fast forward a year and plunge into Swimming Pools off his second album Good Kid, M.A.A.D City which dives listeners in the deep end addressing the psychological side-effects connected to peer pressure an alcoholism….Enjoyed by thousands of students off the face thanks to the litres of spirits they’ve managed to smuggle in with their mates who were talked into buying a ticket which they probably couldn’t afford in the first place!

Shunning the other stages fans stay with Lamar as his short set continues with LOYALTY and a track from DAMN. – Money Trees before we catch up with Kung-Fu Kenny who is now beating the crap out of his opponent in a replica of a level in Street Fighter.

As phones light up the Reading skyline for m.A.A.d city we are asked to keep the party going with one hand in the air and jumping on the spot for PRIDE.

With all that energy being used there’s thankfully a few minutes to breathe as Kung-Fu Kenney rounds off his adventure wearing a Madonna pointed bra dating back to her Jean- Paul Gaultier ending his quest as he finds the holy grail with a beaming light escaping from a model with her legs wide apart. We are quite sure any school leaver in the arena, even if they failed their biology exam, knows exactly what image we are trying to explain. If not, the message which appears at the end of the film which reads: ‘Kendrick found the mother fucker glory hole’ should give you the full picture!

With some leaving before the encore in order to avoid their own karate moves as they wrestle their way through the bodies in-between their selves and their tents those who stay are treated to just one final song…A remix of Bitch, Don’t Kill My Vibe.

Yeah, it was a short set for a headline slot. But it was an ideal way to close the Saturday night at Reading. We learnt about a slave who had his foot cut off, the side effects of drinking too much and most of all the incentive to go home and complete the final level of Street Fighter!

Accessibility at Reading: Thanks to the guys at Attitude is Everything the access was very good indeed.

The accessible campsite was quite spacious and as well as accessible toilets there was a refreshment van and an information tent run by Attitude is Everything although there were only two accessible showers.

Viewing platforms were situated at every stage and clearly signposted.

BSL interpreters were signing for a few performances each day. Details of these were displayed on a white board outside the information tent in the campsite.

There were two viewing platforms for the Main Stage and the Radio 1 stage.

Access to and from the accessible campsite and the arena was a short walk through a gate just for staff and those with accessible wristbands.

All the accessible toilets had a note on the door asking those who didn’t need the facility to be considerate.

The bars around the arena had an accessible serving area so you could beat the queues. 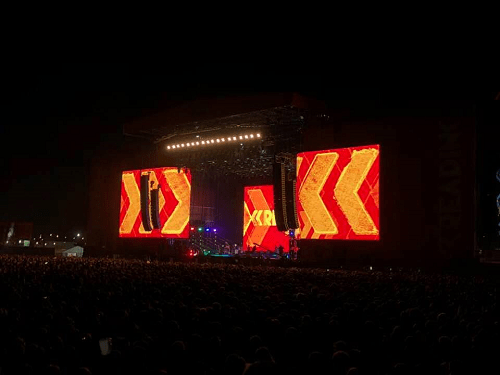