The title of James most recent album, ‘Living in Extraordinary Times’, couldn’t be more relevant.

Within the week between their headline performance at Cool Britannia and our published review content on the Parliament channel has played out as a far-fetched TV drama.

But for the next ninety minutes or so Brexit and the crumbling of British politics is the last thing on the minds of thousands of those who purchased tickets to the festival, now in its second year, which celebrates the heyday of the Britpop era.

For Will even the prospect of one of the greatest bands of the nineties playing Knebworth House tonight is at the back of his mind as he makes his way into the pit ahead of their performance where he kneels in front of his girlfriend Heather and proposes…who fortunately for him says ‘Yes!’

It would be bloody ideal if James kicked off tonight with Ring The Bells, but unfortunately they don’t – it doesn’t even make the setlist, instead they begin with Sound from their fourth album Seven.

He’s not happy about the current state of the world, that’s plain to see with the bands’ recent work. Take for example Heads off the current record which is all about ‘equality’ and a dig at American politics and What’s It All About criticising President Trump.

Veering down towards the front row Tim, dressed in a black faux fur coat, gazes out towards the arena to the middle aged crowd before crowd-surfing like a panther surveying the jungle looking for its prey.

As for Getting Away With It, released in 2001, it’s doesn’t take a buffoon world leader, on either side of the Atlantic, to realise the title is as relevant today as it was almost two decades ago. As Booth performs his trademark crazy dance routines simulating a raggy doll falling apart at the seams you begin to wonder if he’s letting off steam with the political thoughts racing around his head.

Earlier today thousands of people marched around the country taking part in the ‘Stop the coup’ protests opposing Boris’ announcement to suspend parliament during the final weeks of the expected Brexit date.

Booth thanks those who took part, labelling the Prime Minister as a ‘mini Tump’ and warning how dangerous our newly elected leader is in the eyes of those wishing to remain in the EU.

Taking us back to to 1989 when Thatcher was PM and Reagan eventually stood down after years of ignoring the AIDS virus and bombing Libya, James perform Stutter taken from their third album One Man Clapping. Back then money was so tight for the band they had to ask the Royal Bank of Scotland for a £12K loan to fund the record.

1989 - Two controversial leaders. Money being hard to come by. Blimey, has anything changed since the band’s early days?

At least the nineties brought us some timeless tracks from one of Manchester’s finest. Take for example She’s A Star and Top of the World which delights the fans out front who are reminiscing their youth.

Booth is back in the pit. Anyone who has had the pleasure catching James live can appreciate their frontman’s interaction with the crowd, there’s no border controls needed at one of their gigs and everyone is welcome.

Holding the hand of a fan in the front row Tim sings the words to Leviathan, another track from Living in Extraordinary Times which touches on loneliness with the haunting lyrics ‘Ride inside the star ship, Never twice the same trip, Don't wanna be alone, Written on my headstone.’

You may recall Booth made that pretty pun about feeling cool at Cool Britannia, but the real irony comes when he “fucks up” the start of Attention. But there’s no chance of any errors when their anthem Sit Down cross-legs it way into tonight’s proceedings. In fact there was a time when the song was omitted from the band’s setlist because they were so fed up playing it!

Another old favourite, Laid, sees Cool Britannia jumping up and down with joy and almost as much action as Will and Heather’s tent will witness in just a couple of hours’ time!

Sit Down and Laid are considered James’ pinnacle tracks until their popularity started to fade towards the start of the noughties. So it’s a great shame Many Faces never received the credit it deserved when it was released in 2018. It’s a belter, up there with their finest pieces of work, catchy as hell. Hear it once and we challenge you not to sing back the chorus back to yourself, which is what a lucky handful of fans are doing right now after being invited to dance up on stage as Booth picks them out from the crowd.

Between Come Home and encore Sometimes, two more tracks which fail to age with time, trumpet player Andy Diagram notices some of the crowd have made their exit already. “Fewer people” he says into the mic. “It’s the future!”…We are indeed living in extraordinary times!

The organisers have taken note of the points we raised last year. The accessible campsite now has a ramp leading up to a spacious shower and a row of accessible toilets.

The viewing platform was in an ideal location with 2 accessible toilets, both of which were well secured.

What's It All About

Getting Away With It (All Messed Up)

Top of the World 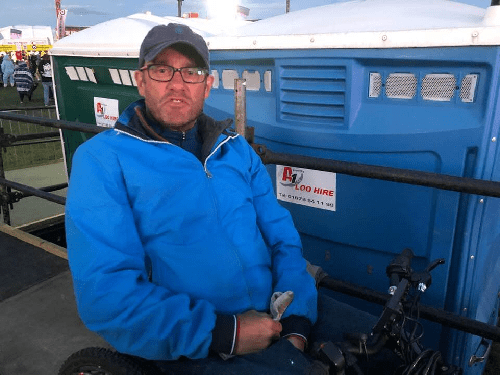 Will from Dorest (Not the dude who got engaged at the festival!)

It’s all good so far. I can’t find anything bad. In fact I’ve been to quite a few festivals and as far as access goes this is the best I have experienced! 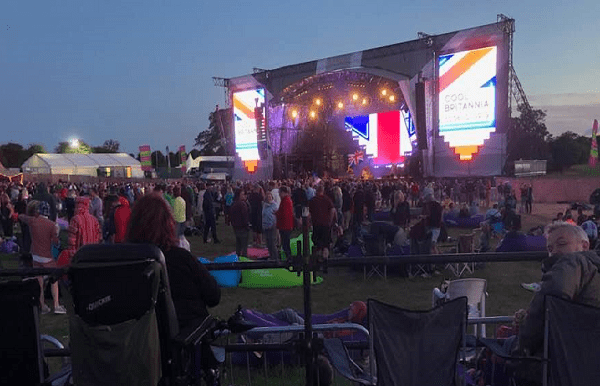