Now a venue staging productions for a New York theatre company back in the late seventies Studio 54 was a popular nightclub at the height of the disco era.

The hangout had a strict door policy, nobody knows this better than a young Nile Rodgers. On New Year’s Eve 1977 he received a call from Grace Jones who told him to meet her at the stage door where she would sneak him in.

Upon arrival Rodgers spoke to the doorman in Jones’ distinctive voice, believing it was a secret passcode, asked to speak to the singer. The security guard misconstrued Nile’s impression and told him to leave the premises, but that night would change Rodger’s life forever.

If he’d had partied the first hours of 1978 at Studio 54 there’s a good chance Chic wouldn’t be headlining the Camp Bestival tonight, which this year has a Super Hero theme which means this isn’t the place for the language one will come across watching a Deadpool movie.

In normal circumstances the opening chords to Just Can’t Wait (Saturday) on Saturday evening around this time would reference the start of Ant & Dec’s Takeaway, but there’s a different type of party to be held tonight and not a car crash in sight!

Nile’s has had an extremely successful career, he’s one of the artists who you forget just how many tracks he’s played and produced until you delve into his discography which includes work with legendary artists and he’s not one to hold back when it comes to sharing his remarkable career.

“This is our very first number one single,” he tells the three generations out front just before they shuffle their feet to Dance, Dance, Dance.

Chic was formed by Nile in 1976 after a meeting with bassist Bernard Edwards. Despite Rodgers taking centre stage he would be the first to admit they work as a team, just listen to those trumpets, drum and backing singers as they play I Want Your Love this evening. It’s a family thing!

He reminds us of some of the artists he’s worked with over the years such as Lady Gaga, Duran Duran, Sister Sledge (who are also playing the festival) and the legendary Diana Ross.

Rodger’s produced Ross’s global hit I’m Coming Out taking inspiration from three drag queens dressed as Diana at a New York club. As well as the LGBTQ+ significance the words also relate to Ross’s departure from Motown Records where she felt she was being controlled by record executive Berry Gordy. The youngsters in the crowd, dressed as super heroes and still under their parents watchful eyes love this ‘new record they’ve never heard’ as they bump up and down on mum and dads shoulders to the addictive song which couldn’t even be broken by a swing from Thor’s hammer.

Not all the artists have been plain sailing for Nile. A certain rising star clashed with Rodgers back in the eighties.

Rodgers helped Madonna with her second album, in fact he produced Like A Virgin within six weeks and suggested the first release should be Material Girl. Her reply was “Kiss my ****!”

Of course Madge had her way and released the titled title track first. Tonight, without a Ross/ Gordy contract over his head Nile plays both hits which is music to everybody’s ears.

Just like Madonna Nile didn’t have a strong connection with his father, Nile Rogers Sr. being a travelling percussionist he was rarely home to see his boy grow up in Lower East Side, NYC. His passing in 1970 meant he managed to catch a glimpse of how successful junior would become after taking up the flute and clarinet before learning to play guitar when he was 16. In his teens Rodgers went on to play in various bands before his paths crossed with Edwards in 1970, six years later the two friends would go on to form Chic.

So, him and Madonna didn’t always see eye to eye, but when Nile tells Camp Bestival he’s about to play a track he produced for Duran Duran, they know what’s coming…and it’s Notorious!

The track worked wonders for Simon Le Bon, but it’s a more poignant song which ‘changed the lives’ for Chic. Tonight the band play Thinking of You as photos of Bernard snapshot across the screen in memory of Nile’s best friend who he lost in 1996 to pneumonia.

Nile himself has had a few health scares too. In 2010 he was diagnosed with prostate cancer, after being given the all clear in 2017 doctors advised him to “go home and contemplate the rest of his life” after finding two aggressive forms of cancers in one of his kidneys.

Sharing the difficult time tonight Rodgers says he did just that, by “writing as much music as I can…one of those songs saw him team up with Pharrell Williams, together they wrote a masterpiece and thanks to the collaboration a new era discovered Nile’s talents through Get Lucky which sparks a new energy into any blurry eyed parent tonight, old enough to remember Adam West as the Caped Crusader, ready for their sleeping bags when it’s played by the man himself who is now cancer free.

We are taken back to 1999 next when Chic saw out the last century with He’s The Greatest Dancer before their drummer transports us further into the past with Bowie’s Let’s Dance – yep Nile worked with The Thin White Duke as well! Before the next dancefloor smash, which comes in the glitter ball form of Le Freak Rodgers introduces us to his Avengers onstage who are the current members of the world’s greatest disco party.

Let’s go back to the first few hours of 1978. Nile has just returned home after being denied entry to a club and Grace Jones is probably wondering where the hell he is.

Rodgers is back his place jamming with some mates, they have just come up with a new track which would go on to become one of his most popular hits, tonight he dedicates Good Times to Studio 54 “as a way to say thank you”, he is joined by a handful of fans and his whole production crew to see out this wonderful night of live music.

As the crowd make their way back to the campsites they will pass a stand manned by the team at the Ellen MacArthur Cancer Trust who support young people rebuilding their lives. Their message, tying in with this year’s theme, is simple…Not all super heroes wear capes. Nile was lucky, he came bouncing back after his illness. If you want to make a difference please donate as much as you can to this worthwhile cause by visiting their website.

There was no parking this year at the accessible campsite but you were permitted to drive in and unload your gear before parking just across the road.

The accessible campsite was quite busy although well designed with designated spaces for pitching up tents.

Upon arrival you were asked to check in at the information tent to collect wristbands for the campsite and viewing platform as well as laminates for personal assistants so you could chose who you took on the viewing area throughout the weekend using the +1 policy.

There was a tent which provided a paying breakfast and loaded fries in the afternoon.

The row of accessible toilets carried polite notes directing those who didn’t need the facilities to the nearby standard toilets.

There were also accessible showers and a Changing Places Unit.

BSL interpreters were working throughout the weekend on the viewing platform, which did become quite busy although unfortunately there wasn’t a viewing platform at the Big Top.

Accessible toilets were situated at the viewing platform and around the site.

There was a buggy service taking access visitors from the accessible campsite to the arena. 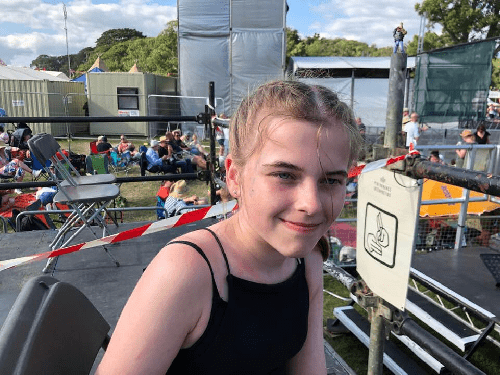 I like that there were chairs on the platform and it feels safe in the campsite but it is bad that everyone is using the disabled toilets this year. 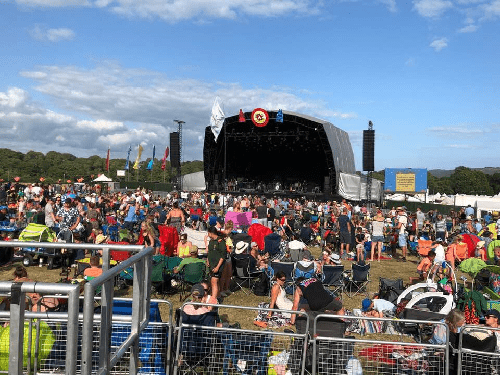