Rewind a few months ago and Oli Sykes didn’t hold back sharing his thoughts on rock.

“There are people who listen to music who cut themselves or they’re depressed, so some artists really play up to that,” the singer told NME in January. “It really doesn’t feel genuine. Emotion is a full range of a spectrum, like colours. It’s not just anger. How are you going to get that out with just a guitar and screaming? You need to explore everything else.”

Tonight Bring Me The Horizon headline All Points East in Victoria Park and their frontman is pumping life into the genre which, in his eyes, is dead and buried.

Opening track MANTRA comes from their Amo album which asked listeners to stand behind Oli to form a cult, well the thousands of fans are certainly doing that tonight as they rock the park’s foundations for Avalanche and howl their packs into a mosh pit going batshit crazy to The House of Wolves.

“Anybody had their heartbroken?” the sensitive bugger asks London. “Every relationship you get into is there for a purpose.”

Hmmmmm, wonder if Sykes had that stable state of mind when he broke up with Hannah Snowdon? Probably not when you listen to Victoria Park singing words such as ‘You rained on my heart for far too long (Far too long), Couldn't see the thunder for the storm’ as they take a dose of Medicine!

Somebody who doesn’t need any form of medical treatment is Cradle of Filth’s founding member Dani Filth who comes springing onto the stage for Wonderful Life before there’s a short pause in proceedings so Oli can don a mask backstage ready for Diamonds Aren’t Forever, their second single released way back in 2009 which unfortunately didn’t quite make the cut.

Oli pauses through Sugar Honey Ice & Tea to stir the crowd into a frenzy before bringing out another guest…Sam Carter from The Architects (who were on today’s bill) to perform The Sadness Will Never End which hasn’t had a live outing since 2016.

That year saw three songs three numbers released by BMTH – Follow You, Avalanche and Oh No from the Sheffield lads who formed in 2004. Sykes and bass player Matt Kean shared a passion for hardcore punk. They met guitarist Lee Malia, who was in a Metallica tribute band and christened their new band with drummer Matt Nicholls, past member Curtis Ward and keyboardist Jordan Fish after hearing a line from a Pirates of the Caribbean movie.

Just like Captain Sparrow they have sailed the high seas to success, Mantra was nominated for a Grammy but as Sykes explains tonight their maiden voyage had a bumpy start.

“When we started fifteen years ago we had no ambition,” the frontman admits. But when “people started coming up to me and saying our songs really helped them” that was the turning point.

One of those songs which “wrote itself” was Sleepwalking which relates to depression, written by Sykes after his addiction to ketamine.

After Pray for Plagues and Nihilist Blues, which sees Oli crowdsurfing over his ever-growing cult their leader asks if anybody saw their “best fucking gig to date” when they played a Teenage Cancer Trust gig at the Royal Albert Hall and dedicates It Never Ends to his friend Aidan who sadly lost his life to the disease.

Another dedication goes to Sykes’ wife Alissa when they play Mother Tongue, last month Oli told the Independent he was “glad my ex-wife cheated on me,” (another dig at Snowdon!) before bringing out Lotus Eater for Antivist.

There’s one more command from Sykes in the encore which sees his loyal fanbase sit on the floor until the drop in Drown...but the main question is has tonight changed Oli’s opinion on the current state of rock?

Rewind an hour or so and he shares his opinion…

“A few months ago I said rock was a load of shite. This festival has shown me I was wrong. I don’t know what I was fucking talking about. Rock is alive.”

The access was extremely good in Victoria Park, starting off with not only a cornered off accessible entrance but also someone to welcome guests when the passed through the gates directing them to the accessible check in tent where they could collect their wristbands, PA laminates and if they wanted, take advantage of the quiet space tent.

The viewing platform at the main stage was spacious, friendly security and had a serving point so you didn’t have to queue for drinks although it wasn’t a lowered counter.

However, most bars around the site had a dedicated lower counter for wheelchair users and some foot outlets had an accessible sign to show they were happy to give extra support to those who required the assistance.

The viewing platform at the second stage was very close to the performing area.

Both platforms had accessible toilets. There were three situated at the main stage platform, one of which was solely reserved for access guests next to a spending area for assistance dogs.

The viewing platforms also had a ground level seating area. 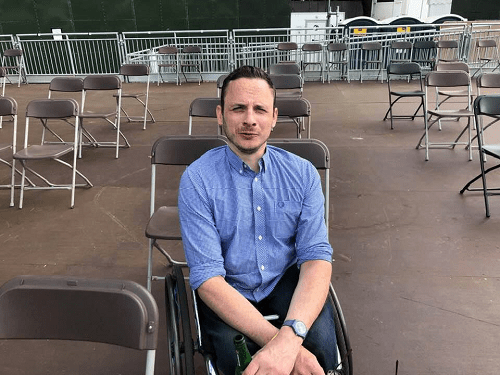 The staff are very helpful. The platforms give a good view of the stages and the accessible toilets are clean. 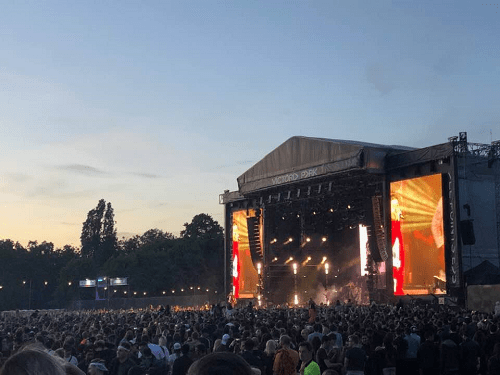 The House of Wolves

The Sadness Will Never End

Can You Feel My Heart

The Best Is Yet to Come