Before we take you through a colourful discussion between the connection between disability and Wicked the musical, which is currently touring the UK, allow us to tangle you up in a cyclone and guide you back to the black and white background behind the play’s history.

Wicked is based on a 1985 story titled ‘Wicked: The Life and Times of the Wicked Witch of the West’ which in itself has its foundations sown in ‘The Wonderful Wizard of Oz’. The musical, which sees two school friends, Elphaba and Galinda (she’s ‘wicked’, the other is ‘Galinda the Good’) premiered on the yellow brick broadway paths of NYC in 2003 scooping up various awards.

The plot revolves around Elphaba and Galinda educational journey at Shiz University (a sorcery school) where we are introduced to Nessarose, Elphaba’s wheelchair bound sister and Doctor Dillamond, a goat like creature who is also a professor at the Uni who brings news the animals in Oz are in danger.+

Elphana was born with a birth defect which turned her skin green, so she is the prime candidate for being the girl all the students pick on whilst Elphana is blessed with beauty and charm.

Like most long term friendships their relationship is thrown into chaos after a third party interrupts proceedings and we are not referring to Prince Fiyero, who invites Galinda to a party or Munchkin Boq, who is asked to take Nessarose to the celebration. The girls separate journeys divide after meeting the Wizard of Oz who incidentally, is behind the animal cruelty threat their professor had been warning his pupils about.

So, that’s the two-hour show condense into a few paragraphs and as most of you can probably see, the plot unearths two controversial topics and we come to our own crossroads ourselves. If we were a PETA associated site our following journey through the Emerald city would focus on the animal welfare side, although even a Scarecrow without a brain could figure out the road we will be skipping down in the remainder of this article.

It’s right there, directly on stage in front of you – being different, or in more PC terms having a disability. Although the focus around feeling isolated is brushed aside by a witches broom as we sweep Nessarose’s wheels into one corner to concentrate on Elphana’s colour, this could imply racial bullying trumps being disabled? 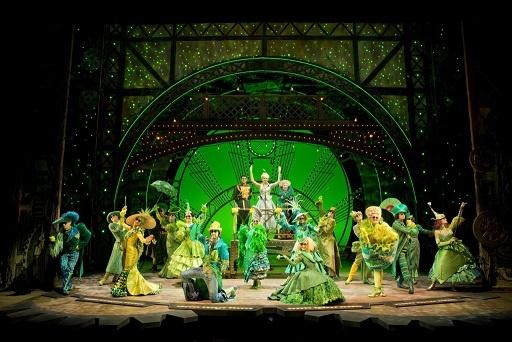 the cast of wicked on stage

Elphana’s birth starves the oxygen away from those born with a disability, although there’s a breath of controversial air when we see from an outsider’s point of view how those with physical limitations are patronised in society. Take for example a scene which sees Galinda begging Boq to take her disabled sister to a party and the anger Nessarose feels when she finds out the true reasoning behind her forced date.

Elphana reveals she feels she is to blame for her sister’s disability because she was born green; her mother ate milk-flowers to make sure her second child wasn’t born an unusual colour. Despite any member of UKIP understanding the morality of such an absurd statement the play cleverly touches on the complications of birth controls which can lead to difficult stages in late pregnancies.

However sometimes the play is as cowardly as L. Frank Baurn’s lion, it brings the aforementioned racial aspect centre stage captivated between the timepiece watch-piece and the authentic cog patterned theme scenery. However, Nessarose’s condition is itself paralysed in a seating position before being magically abounded when Elphaba casts a spell which turns her sister’s shoes into glass slippers enabling her to walk. Note to ATOS consulters – this doesn’t happen in real life, just in case you have a box to tick which asks if this condition can easily be cured!

When Nessarose’s leg start to operate she confesses she forbid the Munchkins from leaving Munchkinland so Boq could stay and look after her. However, with full mobility now in tack Nessarose is astonished to hear Boq will no longer stay with her because she longer needs looking after. Is there a message curled up in this spell which says relationships are formed by what’s really inside a person regardless of their appearance?

If you take Wicked as just a musical you will have a fantastic night, although some squeaking plot holes could do with touches of oil poured by the Tin Man’s can. If you are looking for a story on multiple levels however there isn’t much weight stored behind the Wizard’s curtain.