The Beatles first record was called ‘Please Please Me’. ‘I Wanna Be Your Man’ was written by The Rolling Stones, their self-titled album was commonly rn eferred to as ‘The White Album’…These facts about Paul, John, Ringo and George are shared via a quiz with the audience before ‘Let It Be’ commences, a recent west end play which doesn’t so much revolve around their concerts but recreates them.

Recently checking in at its new home at the Savoy Theatre cynics may label the two hour performance as a glorified tribute show although there again, as the play documents the bands career some may label this review at a poor attempt as rewriting their Wikipedia page.

Taking us back to the sixties the show opens at Liverpool’s Caravan Club our new boyband premiering their new track ‘I Saw Her Standing There’, the first of forty numbers which will play out throughout the evening.

With so much music ‘Let It Be’ is weak on dialogue, there’s little story and scene changes are segmented with various vintage film reels ranging from 60’s TV commercials, original footages of Beatle concerts and historic moments, such as England winning the World Cup in 1996 of which are broadcast on antique television sets dotted around the auditorium.

We join the audience gathered for the 1963 Royal Command Performance where Lennon asks those in the cheaper seats to clap their hands and the rest to just rattle their jewellery before crashing into a memorable rendition of ‘Twist and Shout’. The other half of the infamous Lennon and McCartney pairing stands solidarity to continue our journey into the past with ‘Yesterday’.

From a TV audience of thousands with those being able to afford a television set to those able to buy tickets to the bands first stadium tour at Shea Stadium in 1965. This time its Ringo who connects with the crowd by waving to those in the very back aisle who are surrounded by thousands of fans screaming at high-pitched voices who have all paid for a ‘Ticket to Ride’.

One record which the band never played live, until tonight is ‘Sergeant Pepper’s Lonely Hearts Club Band’ which sees the Fab Four encouraging hand claps from all the happy couples in attendance. The bands’ sixth studio album, recorded in 1967, saw the Beatles going through their psychedelic phase and tonight the hazy journey is recreated by Monty Python-style animation displayed on the backdrop artistically folding in tune with the trippy notes escaping from Lennon’s piano. 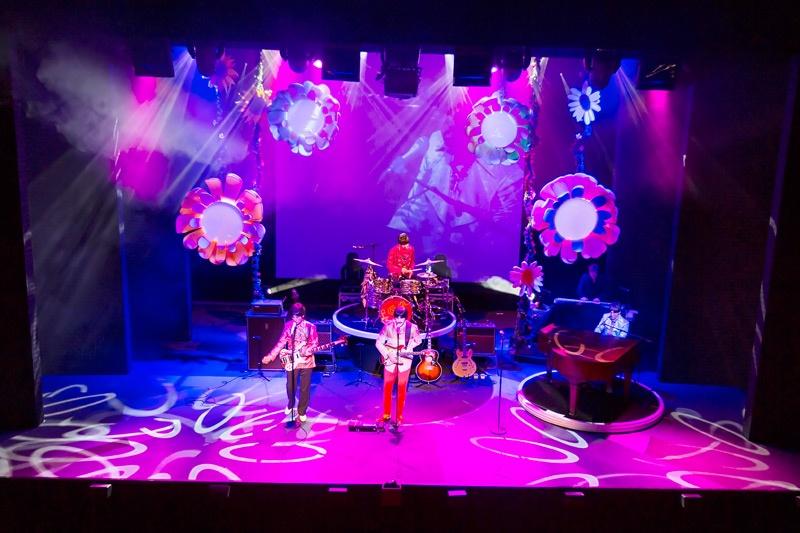 Rolling up for the Magical Mystery Tour which has come to take us away to the intermission we take a diversion into Strawberry Fields before purchasing our refreshments ready for the mouth-watering second half.

Opening with Blackbird our Beatle experience receives its warmest applause so far and it’s not long until we are treated to some tracks off the bands eleventh album. We aren’t going to share the title with you just yet as, similar to the quiz transmitted on the TV screens prior to tonight’s performance we thought we would check if any of our readers are avid fans of the band. Although to be fair, the audience were given multiple choice answers…So what was the title of The Beatles eleventh album? A) Rubber Soul, B) Revolver or C) Help!...see if you’re correct after we have told you more about the musical itself.

Let It Be opened at the Prince of Wales theatre last year to celebrate 50 years of The Beatles, the musical is purely for lovers of the band’s music as unlike other plays based on successful artists there’s no Mamma Mia romance story or a sci-fi plot loosely connected with talents from Freddie Mercury. There’s also no grand stage production changes, the set is basically a few different backdrops changing around the band’s stationary bandstand. Although variety is weak the show allows us to grow with the band members as we follow them through their fashion seasons, hairstyles, moustaches and the birth of Liam Gallagher’s borrowed trademark standing with hands behind the back, long hair and wearing a pair of sunglasses…all thanks to John Lennon of course.

By the way, the answer was ‘Rubber Soul’ (the band’s eleventh album) and after numbers such as Norwegian Wood and In My Life George steers us down The Long and Winding Road, although to break up the trek he tells us the song was originally recorded in the back of a van in Scotland and was never intended to be played with a live orchestra. 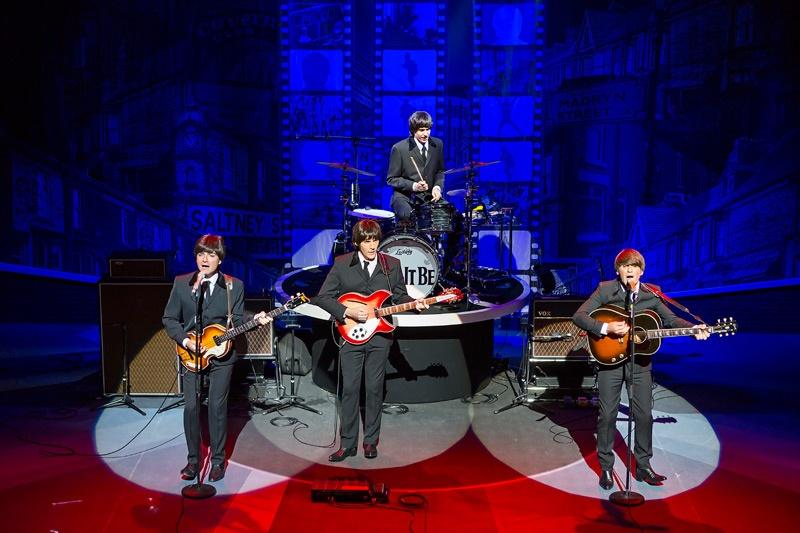 Next it’s back to the TV screens which show footage of the Vietnam War, fortunately though we don’t have to hop into bed with Lennon and Yoko for the next two weeks as the film swiftly delves into the Flower Power era and takes us to the world’s most famous pedestrian crossing for a traffic-stopping performances of Come Together, Get Back and Revolution. There’s also reference to the band’s impromptu gig rooftop gig in 1969 although you can’t help thinking these series of events could have been given more attention in the musical itself and were open invitations for the show to provide some spectacular stage sets.

Closing with an encore which strings together, All You Need is Love, Let It Be and Hey Jude it’s apparent the musical relies on the most famous songs from the most famous band in the world and is the closest we will probably ever come to witnessing the Fab Four playing live and for that very reason it’s hard to fault this basic yet very enjoyable west end show.

Disabled Access at the Savoy Theatre isn’t too bad, there are no steps to the box office although there are a couple of steps leading up to the Upper Circle and 33 leading down to the Dress Circle where you will find an accessible toilet and all staircases have handrails. If you are in a wheelchair you can enter the theatre via a ramp from Carting Lane.

For more information and to book tickets visit the Let It Be website.