A few miles from Number 4 Privet Drive approximately 1,400 muggles are stepping out into Shaftesbury Avenue at four forty five in the afternoon all wearing a pin on their upper garments.

This organised commotion outside the Palace Theatre is the result of JK Rowling’s eighth and if we are to be believed, final encounter with Harry Potter.

Providing you haven’t been stranded at Platform 9 ¾ for the past twelve months it’s a safe bet a messenger owl or some other form of communication has brought news of ‘Harry Potter and the Cursed Child’ - a new stage play in the West End which closes the book on one of the most successful fantasy series to date.

As with the films the play isn’t your standard bottom-sitting session. Spilt over four acts and five hours the Cursed Child leaves Kings Cross Station in the afternoon as we see Harry and Ron Weasley – now married to Hermione - bid farewell to their children, Albus and Rose as they board the Hogwarts Express where they befriend Scorpius who may or may not be the son of the evil Voldmont.

And that’s where the title drops in. Is Scorpius the ‘cursed child’? Or could be another character. Don’t worry, we aren’t turning any pages in this review which would spoil the suspense if you are lucky enough to own one of the illustrated black and yellow tickets which have recently been torn by the venues staff just a few minutes ago.

Most of the actors who step into the characters shoes bear resemblance to those we have grown up with at our local multiplexes, making the first act easier to delve into…and then there’s the magic which first waves its wand when Albus and Rose (Weasley’s daughter) enrol at the Ministry of Magic.

It isn’t giving much away by saying the synopsis unravels itself through time travel by a device confiscated by the Ministry of Magic, known as a Time-Turner which allows five minutes in the past –could this device hold the answer to Amos’s unhappiness?

Amos, as the young Summer holidayers dressed in Hogwarts uniforms will tell you is the father of Cedric who won the Triwizard Tournament in The Goblet of Fire. The series of events leading on from Cedric’s win cost the Hufflepuff student his life…so throughout the day we travel back in time where Albus, Rose and Scorpius attempt to change the course of history…Which of course, doesn’t go according to plan but brings some magical stage effects, especially when a second task to rescue Cedric nosedives into a lake. 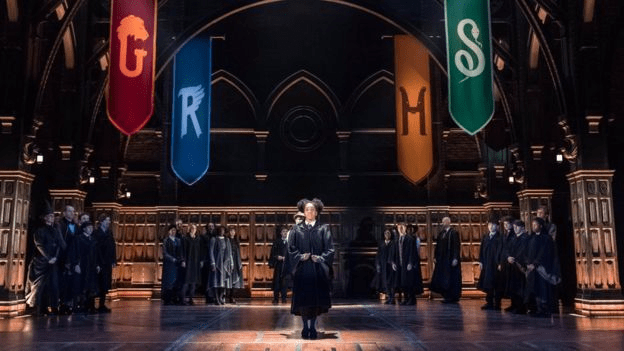 Scene from Harry Potter and the Cursed Child.

Tackling subjects covering loneliness, separation and crumbling parenthood bonds Rowling always has one foot in reality throughout this epic journey.

4.45pm. A bookmark evenly marks the midway point and our very own Time-Turner takes us back to where our story commenced. We pull out a badge from the baskets fellow muggles are holding in the foyer displaying the caption #KeepTheSecrets. The social media message reminds us to keep schtum about the hidden treasures which are unearthed inside the Palace theatre walls.

What isn’t so hush hush is the background to this magical performance which has been in development since 2012. Written by playwright Jack Thorne based on an original story by J.K. Rowling the success of the play, which saw 175,000 tickets sold within eight hours, has seen the run being extended to at least May 2017. This summer the theatre are holding a ticket lottery every Friday where some of the best seats in the house are sold at the lowest prices – for die-hard fans that’s the equitant of winning the national Quidditch championship!

The evening performance sees the third act taking us into darker territory unlocking a series of terrifying twists causing more terror than the inhabitants of Azkaban…and Dementors are released! The consequences using the Time-Turner rear their ugly heads as the youngsters find themselves in danger and Hermione & Ron in an alternate reality where they haven’t tied the knot. With so much storyline cramped into an hour the act throttles along with a complicated plot which can lose those who are yet to read the book.

Back in muggle world we overhear a conversation between a bar attender and a customer during the interval. By now we have all been whisked away back to Potter’s origins by Harry’s dreams, gasped at a page-turner plot and transfixed on the set which wouldn’t look out of place at the Warner Bros. Studio Tour, which is devoted to Rowling’s creative mind. As the potion is passed over the bartender smiles as he says ‘I bet you weren’t expecting that (after the third act)’.

You wouldn’t want to read the final chapter of a book first would you? So divulging too much of the last act would be a sacrilege – along the lines of opening up a Chamber of Secrets! What we can reveal is we are taking back to where this quest first started… Number 4 Privet Drive and Harry Potter has his most challenging role in all his forty years….and it isn’t just Potter who makes his West End debut!

10pm. The streets of London have an extra 14,000 pairs of feet treading its surface again. For the past few hours they have been absorbed in Rowling’s imagination and her most beloved character to date. But now it’s back to normality, stations without fractions await to take us home and the only potions which can carry us into an alternative reality are being poured at the cities bars. After such a magaical journey we are cruelly pulled back to normality…Unless we can find a spare Time-Turner!

Harry Potter and the Cursed Child is currently playing at The Palace Theatre, London.