Fold Tim Burton’s script for Edward Scissorhands in four, cut around the edges and the paper doily you end up with is the synopsis for the contemporary dance version of the 1990 movie.

The discarded paper shapes falling from your creative piece of work contain the magical touches which can only be sculptured by Burton’s mind, although the plot stays intact despite the series of holes which are scattered throughout this two hour non-speaking performance.

Choreographed by Matthew Bourne and premiered at London’s Sadler’s Wells Theatre in 2005 this magical tale of a boy, created by an inventor, who was born without a pair of hands after his creator dies of a heart attack before adding the two finishing body parts.

The film was set in the 1980’s, but Bourne’s adaption dates back to 1950’s, although it keeps the eerie dark gothic edge the familiar movie presented and the bright, luminous, colourful feel Burton glazed when Peg Boggs welcomes Edward into her suburban town. (A noir atmosphere at the inventor’s house and the graveyard, colourful scenery as we reach Boggs’ neighbourhood)

The stage production doesn’t quite reach its attempt to capture such a dazzling world, a lack of detail to the backdrop and basic props gives the impression of a regional pantomime production opposed to a spectacular festive production in the West-End.

In its defence there’s clever touches here and there, the most impressive being Edward’s attempt at topiary, shaving a hedge into a star and lets not forget, this is a dance production so attention to performance art should be taken into great consideration. 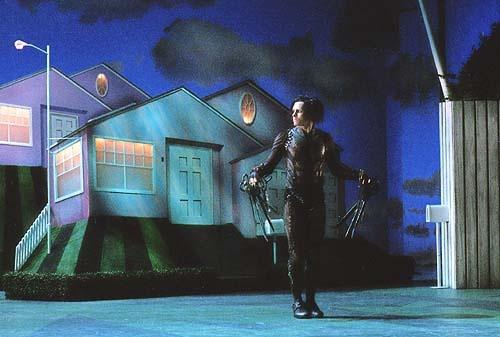 The ballad scene in the first half, which sees cheerleaders escaping from framed pictures on a dormitory is the first time we see a substantial dance performance. Although it seems Bourne himself forgot to add the mechanical hands to this ambitious project.

Burton’s film tackled serious underlying messages, disability and loneliness. The stage adaption almost achieves these points, we see Edward bullied by kids as they go Trick or Treating and he is left stranded when a musical celebration wraps into a slow dance. On a lighter side Edward’s lack of co-ordination is balanced by his ability to use his scissorhands for kebab sticks and become the king of all hairdressers. The trouble is Bourne’s offering carries little depth when focus draws to the sensitive plotlines. The dark story-tale which received a PG certificate in the cinema presents itself as a half term treat to keep kids quiet for a couple of hours.

Edward’s mannerisms are caught on stage extremely well, his stationary curious portrayal on his new lifestyle is played ambitiously. Kim, the love interest plays a prominent role which connects well to the adaption and then we have Joyce...

In the film Joyce tries to seduce Edward, when her attempts fail she claims the boy tried to rape her, the serious subject was snipped away in Bourne’s cut. Parents taking their children to the London productions during the Christmas holidays are probably thankful omission although you can’t help thinking the play could have been a success if it was interrupted as a ‘grown-up’ stage show carrying a much more gothic direction.

When Edward accidently cuts a guests hand at a Christmas Ball (in the film he cuts Kim) he is banished from the town. Kim follows him to the local graveyard where the two eventually kiss and, at last, the snow cannon is switched on covering the stage for the plays final scene.

Fold Matthew Bourne’s script accordion style, draw an outline of a man with scissors for hands and when you unfold you’ll have the same old pattern which provides little thrills, no surprises but it’ll keep the youngsters amused for a while.