Four men, those we just mentioned in fact – those dressed in all white outfits – are ordered by the clown to search for an audience member. Once the individual is located they are carried on to the stage before being carted off backstage before returning dressed in a matching white costume. A radio tunes in to an infrequent station which voices to mute clown operating the wireless contraption. A man whose body starts with a neck wanders into view holding a brolly and a hat, which is has evidently been unused, which he places on top of a singing infant. Welcome to Quidam, the ninth in a series of shows which fall under the immaculate Cirque Du Soleil collection which combines theatrical movement which astonishing acts which detonate ones breathing patterns as they gasp for breath throughout a two hour spectacular journey. 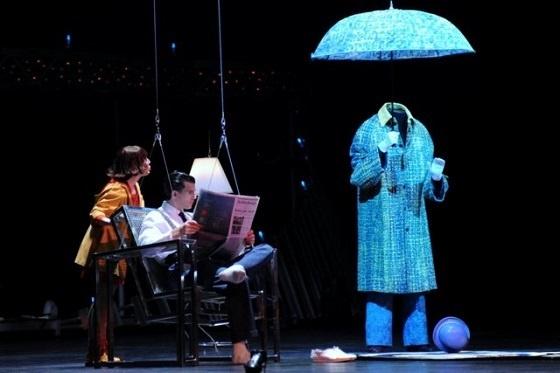 The first sign that we are in for a miraculous evening is the arrival of the German Wheel which sees a performer spinning 360° around the stage before the arrival of the juggler. Relax, just because we mentioned the ‘J’ word at a circus it doesn’t incline the entertainer in question depicts the punchline to ‘How do you murder a circus?’ teaser. His spectacular piece involves a mind-blowing flying display of three diabolos which embarrasses our English language for failing to create a word describing a level beyond professionalism.

From wheels and juggles to swings and robes as the girl reappears rocking back and forth whilst her father emerges with his head literally inside a newspaper travelling above the stage attached to one of the five arches that reach out towards the Albert Hall’s top balcony. Another arch lowers a red silk curtain which cradles an exquisite delicate display of acrobatic talent from a young lady who graces us with her immaculate circus skills. 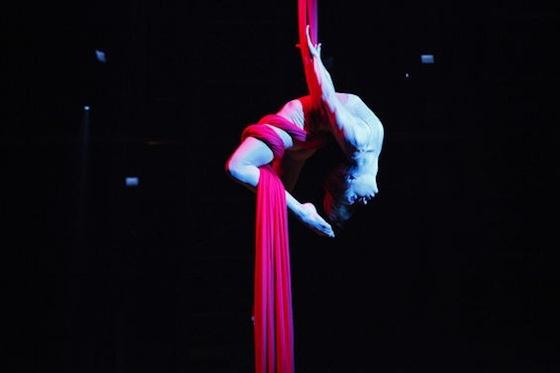 It’s playtime and out comes a few ropes which only values centre around aiding active feet to skip over their rotating cycles. Stepping up this past-time fulfilment and taking the sport outside school confinements into the Cirque sanctum the game is upped with three skipping ropes and two pairs of feet avoiding any contact with the string.

Control your astonishment from the past act and raise your heads as dangling from the arches you will be amazed what three young acrobats can do with a few aerial hoops. Their commitment towards learning such powerful skills shines through as they make their flawless performance look so easy. Divert your eyes for a second and you will notice none of the towering acts reach out for a safety net. In lame journalist terms we can only compare by carrying out our daily literature routine without a backspace key and a spell check programme spluttering a deadly virus.

Commuters in the audience tonight amongst the VIP crowd filled with the UK media, television personalities and boyband members are given ideas how to waste time waiting for their desired choice of morning transport in the next segment. All they require is a bowler hat, an umbrella and a few red balls alongside a scholarship which they earned at the Royal Academy of Dexterity. Following this slant on juggling two bells ring, one from the original chiming instrument, the other attached to a bicycle amongst a gathering of cast members releasing small red balloons seeing off the first half of the show.

The second half commences with a twirling woman continuing the storyline which is heavily over-shadowed by the acrobatic showmanship. Despite the synopsis being difficult to follow research tells us Zoé is the little girl who feels isolated from her family. The bored youngster escapes into a make-believe world she imagines called Quidam which is also the name of its leading headless character.

Balancing plots and amazement may not be Cirque’s strong forte, but when it comes to balancing of a different kind the shows leave others toppling over. Take, for example, the lady who only relies on the small surfaces of thin poles for any kind of support as she delicately rests her whole body on top of them whilst Zoé plays with another red balloon in the background. The coloured flexible helium bag is becoming an irregular cast member itself throughout tonight’s performance.

The men in white also make a further appearance when they are reacquainted with John the clown for a spot of light relief before five acrobats are literality roped into the arena to perform eye-shattering tricks which dizzy the eyes trying to piece together the enriching form of comradeship being played out in their direct sight. Our next form of enjoyment requires no ropes, wooden spinney things or hoops – it just requires trust between a man and a woman. The human statue is the pinnacle act of the evening as the two performers balance on top of each other just shoulders to shoulders to form symmetrical shapes before the young lady levers horizontally from the waist of his vertical stature – truly breathtaking! 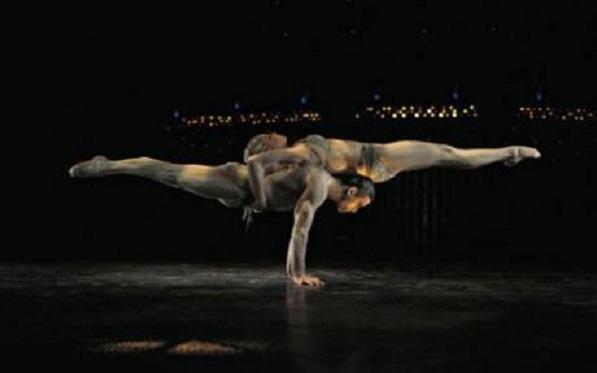 A silence movie scenario follows which sees suspected plants in the audience buddy up with a silence movie clown director who act out a loosely based comedy plot although laughs turn to gasps as Quidam moves on to its final acrobatic piece involving energetic dexterous dancers who form a memorable artistic presentation which climaxes with a human tower eventually pieced together by a flying lady.

The joyous finale rounds off the night with the cast parading spontaneity around the stage. Zoé patches things up with her parents, the white men disrobe to reveal their identities, acrobats have their feet safely on the ground, jugglers are empty handed and the clown is seriously lapping up the applause...As for the Quidam himself? Well, sadly he’s still without any facial content whatsoever!