Queen Prospera, the goddess behind her daughter’s coming of age ceremony, has caused a storm. The torrential weather washes up a group of men on the queens’ mysterious island, one of these fine young looking gentlemen, Romeo, will fall for her daughter, Miranda.

This is the synopsis to Amaluna, one of the spectacular Cirque du Soleil shows which is currently running at London’s Royal Albert Hall. First performed in Canada four years ago Amaluna – ‘Ama’ translates to the word mother in various languages, ‘luna’ refers to the moon – features some literally breath-taking performances over the course of two enchanted hours.

We are swept away with Valkyries flying over our heads attached to aerial straps, gymnastic displays which will silence the crowds and in this particular show, a shallow waterbowl which requires deep concentration for those who dive into its glass interior.

This being a relative new addition to the Cirque series brings the nostalgic clowning around up-to-date with our two most light-hearted entertainers. Throughout the night nail-biting stunts are intertwined with funny – although sometimes cringe worthy, comic relief. Miranda nanny, Mainha and Miranda’s pet lizard with a devilish tail invade the auditorium pickpocketing SmartPhones taking selfies.

Later on in the evening’s proceedings Mainha will be joined by Romeo’s servant Papulya blowing kisses between the aisles. The slushy wet act finally lands a smacker when Papulya decides to kiss a male member of the audience.

Away from mere mortals such as ourselves when sailor isn’t canoodling on dry land he performs graceful yet delicate strokes of a different kind joining Miranda in the waterbowl. Diving into the few inches of water from a plinth – which will soon form the perfect bench for an amazing balancing act.

As well as the aerial displays, balancing tricks and activities which would immediately ban you from local swimming pools the first half sees the Lizard teasing Miranda with a ball – which the added help of trap doors, a peacock dance where their Goddess meets Romeo in the forest and a startling display of lizards leaping through hoops.

Amaluna, which is loosely based on Shakesphere’s ‘The Tempest’, is a very feminine affair. Almost three-quarters of the cast are women. The storyline centres on a girl becoming a woman. The underlying message concentrates on femininity in the moon/luna’s shadow – which in itself is a symbol of femininity. 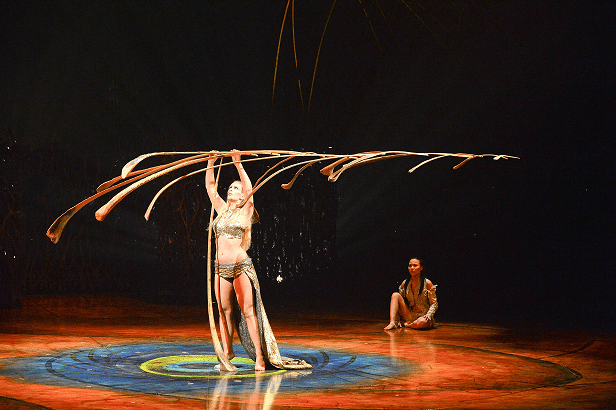 The second part digs away at the grassy thorns, behind these tangled roots we see a group of men captured on the island flying of teeterboards. Although it’s the next segment which has us glued to our seat.

Simply called ‘Manipulation’ we are introduced to the Balance Goddess who delicately rests palm fronds on one another forming an elegant structure balanced upon her head. It’s outstanding, the part of the show which will be relayed on tube journeys home. The pieces will only part when the smallest frond is removed showing the immense skill behind this spellbinding, architectural skeleton.

Another, if not as angelic, construction is a cage which fiercely descends from the sky trapping Miranda. Her only hope of freedom is Romeo demonstrating his muscular powers, climbing a Chinese pole, every now again almost tumbling from its towering height by clinging on to the bottom. Romeo is showing off, impressing Miranda who he eventually reaches thanks to an aerial elasticated strap.

Whilst Romeo and Miranda are finally being untied heartbeats are pumping between Mainha and Papulya where they have just stumbled across a ship. Below the mast our two lovebirds act out their affections for one another before the night sails towards its climax. Before we reach our final scene it’s time for another magical element which only Cique can do well…resurrecting life back into juggling with the Lizard rainbowing balls over his head, some set alight with fire as the creature shreds his skin.

Our own shuffling act between unbelievable feats of human ability and tales pouring from Prospera’s clouds have come to an end and as the moon gradually frazzles away we join hundreds leaving the Albert Hall taken back from the past two hours…and ready to recite that balancing acts as they make their way home beneath the streets on London.

Amaluna is playing at The Royal Albert Hall, London until 6 March 2016. For tickets and access information visit the venue’s website.