US rapper Koncept has recently released a third single from his new album, Champagne Konny which drops on 16 August ahead of his UK tour.

‘My mom has Congenital Heart Disease, which is a defect she was born with in which one of her vessels leaks. It's something that affects her and has affected her whole life. It's definitely something that scares me. Especially anytime that she has to have surgery, which has been a few times throughout my life.

My mom is so strong though, and I can’t even begin to imagine how brave she is to even go through one of those surgeries, never mind all that she has done up to now.

She is also my biggest fan, my biggest supporter, and believer even when she might think I'm a little crazy!

She loves my music, but at the same time she's from Queens and blunt, so she will tell me when she doesn’t like something as much, which is usually when there are some sort of sexual references, or similar, ha-ha.

In spite of it still being a PG rated you tube friendly parody, I didn’t think it would probably be one of her favourites, however she thought the video was so good that it bought a tear to her eye! Being a huge fan of Married With Children did help, but it’s times like this that help to inspire and motivate me when I know she is having such a tough time with her health.

With it being such a long term issue for her to live with day by day, it makes me appreciate how lucky I am!’

After two years on the road and a lot of time spent in Asia, including a sold out tour with Scoop Deville, US artist Koncept now returns to the UK for his 'Champagne Konny' tour. Koncept has been through his recent ups and downs like everyone else, but the lows are what make you who you are, and for Koncept, they have given him inner strength, only helping him to keep building success.

ff the back of three single releases into his new album 'Champagne Konny', Koncept discovered a new perspective on his career and life in general, and this new project is his recharge into a new era!

'Sheeesh' is a PG rated take on Boogie Nights, combining a quirky amusing video alongside a straight up summer banger.

'Champagne' portrays a grand, luxurious, yet wild adventurous side of Koncept with strong references to The Great Gatsby, portraying a metaphorical comparison of Koncept’s personality and lifestyle.

Whereas in 'Watch The Sky Fall 2' featuring the legendary Royce Da 5'9, Koncept brings his smooth effortless sounding East coast flavor, and with Royce’s witty lyrics and Detroit charisma, this is a song for every hip hop fan across the board.

Champagne Konny is due for release 16th August 2019.

Tickets are on sale now from the Skiddle website. 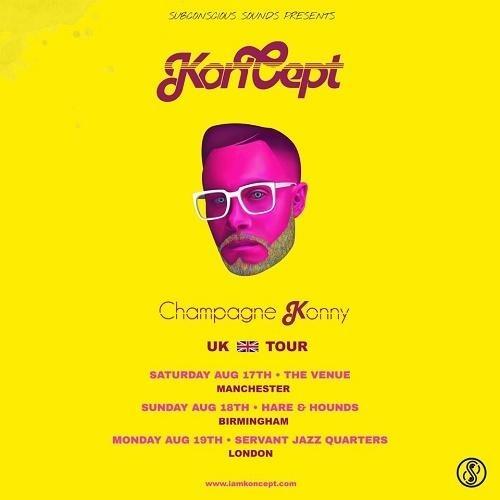