‘Back in the real world and its uncertain future, it’s hard to think about what has happened – I am alive. I survived cancer. I was saved from certain death. Here I am, thinking about it all when I should be dead and gone and not thinking about anything. That fifteen months walking in the Valley of the Shadow of Death is now fading like a dream . . . All I could do was stand there and dig it, the colours and the dragons. If only Irene could be with me by my side’

Given just months to live, rock legend Wilko Johnson decided to live his life in the moment, embarking on an exhilarating final chapter of farewell gigs and record deals. But he didn’t die. A chance meeting with a photographer called Charlie Chan sparked an improbable chain of events culminating in a life-saving operation.

Born and raised on Canvey Island (‘Oil City’), Wilko Johnson reveals a life of vertiginous highs and profound lows. After following the 60s hippie trail to Afghanistan and India, and teaching Shakespeare in Essex, he became a founder member of the cult 70s punk precursors, Dr Feelgood. His unique guitar playing style and energetic stage presence were a driving force behind the band’s international success. But then came clashes with other band members, who had begun to drink heavily, and Johnson, amphetamine-fuelled guardian of the band’s basic R&B style. He was forced to leave. 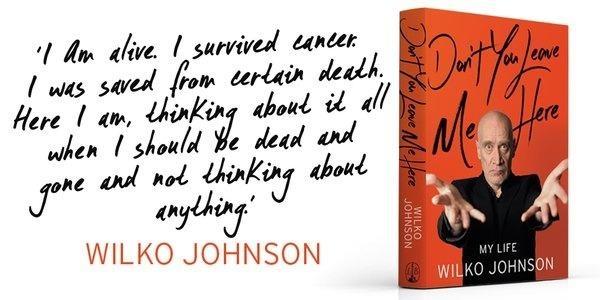 Quote from Wilko's book which reads 'I was saved from certain death. Here I am, thinking about it all when I should be dead and gone and not thinking about anything.

With his considerable talents for writing and performing, Johnson bounced back. Along the way he played with the Blockheads, while attempting to mind the uncontrollable Ian Dury, became friends with John Lydon and Lemmy, and exploited his stare as the sinister execution Illyn Payne in Game of Thrones.

In these very funny, self-critical and moving memoirs, Johnson acknowledges his own hand in his successes and failures with stoical good humour and high spirits, despite claiming to have always been, in his own words, a ‘miserable bugger’.

Don’t You Leave Me Here – My Life by Wilko Johnson is on sale now published by Little, Brown in Hardback priced £18.99.