Emma Claire Sweeney tells us the inspiration behind her new book, The Owl Song at Dawn...

Some of my most prominent memories of my grammar school days in Birkenhead relate to my sister, Lou, even though she attended the special school across the other side of town. After a swimming lesson in the early nineties, for example, an older boy referred to Lou as a ‘spaz’. I still remember the sudden strength I acquired when I pinned him against the wall, seeing it as my role to speak up on her behalf.

Not long after this, I complained to my first year English teacher about the use of the term ‘idiot’ in Nina Bawden’s Carrie’s War. Mrs Nuttall generously responded by devoting one class to a debate on the subject. It is only in writing this that I realise the extent to which I am indebted to my former teacher. She legitimised and focused my fierce (and, in hindsight, somewhat misplaced) sense of injustice at the inadequacy of literary representations of learning disability.

I had yet to find in the novels and poems I devoured a portrait of a family that resembled mine, and so, with the help of Mrs Nuttall, my inarticulately angry response to that boy at the baths was now being funnelled into a creative process that allowed me to speak up on behalf of those who, like Lou, lacked the language or comprehension to tell their own stories. My first ever secondary school creative writing assignment, for instance, was about a girl trying to decipher a phrase that her sister kept repeating indistinctly.

Even back then, I suspected that most people had misconceptions about learning disability, and that fiction and poetry could help to subvert them. Have you ever assumed that, deep down, a sibling must inevitably resent his sister or brother with learning disabilities? That the life of someone with learning disabilities must be overwhelmingly bleak and is therefore deserving of pity? That families who raise their disabled child at home are somehow saintly in their powers of endurance?

When I mention Lou’s cerebral palsy and autism , I am usually offered sympathy on the assumption that her life must be miserable and my childhood must have been tough. This is hardly surprising given that as recently as 1983, when Lou was diagnosed, the doctor told my parents to focus their love on her twin, Sarah, and on their eldest daughter, me; put Lou in an institution; forget there had ever been three.

If only he could see us now: Lou leading the way onto the dance floor, throwing back her head in laughter, singing along to the lyrics; Sarah and me and our parents following in her wake, looking on – half in apology, half in admiration – as she elbows her way between couples, getting the men to dance with her. Her lack of inhibition gives us an excuse to join her on the dance floor: she’s always the first to get up and the last to leave.

Keenly aware that I was in the early days of studying my craft and alert to the importance of a sensitive representation of learning disability, throughout my twenties I wrote about other subjects. And yet, I never doubted that my pen would one day return to this.

As a schoolgirl, I had failed to comprehend the moral minefield of “Nothing About Us Without Us”, which had not yet become the slogan of the disability rights movement. But when I returned to the subject of learning disability as a professional author in my thirties, I began to feel uneasy about my early notions of speaking up on behalf of someone else. My early attempts to give voice to a fictional character with learning disabilities in my novel-in-progress, Owl Song at Dawn, had resulted in the kind of patronising, infantile qualities that I was trying to undermine.

Could this not disempower the very people I was trying to help?

When I was awarded an Arts Council residency at Sunnyside Rural Trust to work with a group of adults with learning disabilities to compile an anthology of life stories, I had no idea what form the vignettes would take. It was only when I listened to the recordings I had made during the year that I realised I was listening to poetry – a new kind of poetry, but one I found half-familiar because it shared some of the qualities of my sister’s language: a language I have spent a lifetime trying to learn. I decided to write poems using only the words and experiences of the participants. Through repetition and placement, I found that even a narrow range of phrases could take on diverse meaning. By listening with the heart, readers might feel as if they have understood something that has been expressed through fracture and lacunae as well as through coherence. 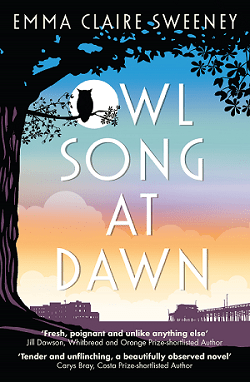 Cover of The Owl Song at Dawn

And, so, the poets at Sunnyside helped me to find a solution to the voices I was struggling to render in my novel. I began transcribing all the things my sister said to me during our nightly phone-calls: Cheeky pie and custard don’t forget the mustard. What’s your name? My name’s Louise Katherine Sweeney, 31 Grange Road East, Claughton, Merseyside. Where’s Sarah? Sarah’s in Leeds. Where’s Seth? My nephew. Seth’s laughing at me! You’re drunk! That’s not funny. What noise does a cow make? Moooo. Who do you love the best, Mum or Dad? You’re stupid. You stink! I like tractors. I like owls. Twit-twoo, I love you true. More than words can say. Tiger, tiger burning bright, in the forest of the night. Night, night, sleep tight, make sure the bugs don’t bite.

In my revised novel, I have attempted to capture something of Lou’s language in the voice of Edie, my character with learning disabilities. Of course, I have simultaneously adapted it for the character who was born in the 1930s in Morecambe and whose seminal life experiences are radically different from Lou’s.

This redrafting trajectory of Owl Song at Dawn took me closer to an appreciation of the kinds of stories that Lou is already expressing with her melodic and quirky turns of phrase. Lou and the Sunnyside poets together taught me to avoid speaking up on behalf of people with learning disabilities. Instead, I now attempt to narrate with them in the hope that people are ready to listen.

Emma Claire Sweeney is a writer, who has won Arts Council, Royal Literary Fund and Escalator Awards, and has been shortlisted for several others, including the Asham, Wasafiri and Fish.

Emma publishes literary features and pieces on disability for the likes of the Guardian, the Independent on Sunday and The Times.

She teaches creative writing at New York University in London and she has a PhD in literary representations of learning disability.

Owl Song at Dawn, a novel inspired by her sister, who has autism and cerebral palsy, will be published by Legend Press in 2016.

A Secret Sisterhood: The Hidden Literary Friendships of Jane Austen, Charlotte Brontë, George Eliot and Virginia Woolf, which Emma is co-writing with her own friend, Emily Midorikawa, will come out in 2017 with Aurum Press in the UK and Houghton Mifflin Harcourt in the USA.

Together, Emma and Emily run SomethingRhymed.com – a website on female literary friendship.

Emma is represented by Veronique Baxter at David Higham Associates and you can follow her on Twitter with @emmacsweeney.

The Owl Song is released on 1 July 2016. We have a copy to giveaway – Just follow us at @able2uk, find the relevant tweet and give it a RT before 19 July. UK Only.