Following a popular TV series in 2019 Vicky McClue is back on our screens this Christmas with a very special programme.

Back in 2019 the Line of Duty star gathered a choir of people with dementia and after a series of rehearsals took them on stage at the Nottingham’s Royal Concert Hall where they performed in front of an audience of 200.

One of those singers was Mick Bonser,54, from Bilsthorpe near Mansfield, in next week’s festive documentary the 54-year-old prepares for a solo performance at the London Coliseum.

In January 2018 Mick was diagnosed with Alzheimers disease, the illness was spotted after he “immediately” lost his memory suffering two serious seizures.

The former IT worker and miner knew something wasn’t right when he started to forget how to count money, tell the time and carry out simple tasks.

He told Nottingham Live appearing in last year’s show was “pure joy” and was amazed when he was asked to star in a follow-up programme for 2020.

His wife Karen Bonser, 54, said: "We went down on Wednesday November 25 and the BBC sent a car to collect us.

"They gave us an apartment for the night, they took us down Oxford Street to see the lights and we did some photographing there.

"The car picked us up on Thursday morning and Mick was dressed up in his tuxedo, and we went to the Coliseum. 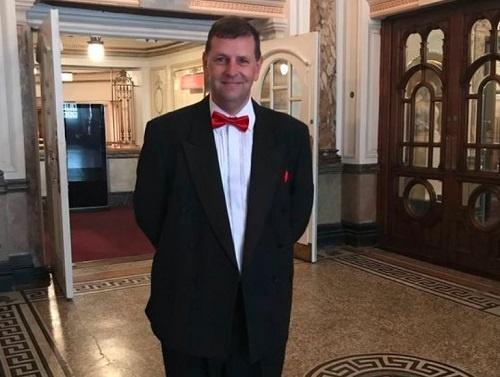 "We were treated like royalty, they put signs up welcoming Mick (pictured above) and saying they hoped we had a special day.

"We had The Coliseum to ourselves, it was just me and Hannah in the audience and Vicky came out to say Mick was dedicating his performance to us.

"Mick performed on stage with a member of the English National Opera and Adrian Dunbar, but I can't confirm what song he sang just yet – that will be a surprise for everyone.

"They did a bit of dancing, singing and Mick smashed it – it was a day full of pure joy and euphoria."

The programme, which airs next week, also includes a catch up with the other members of the dementia choir.

A spokesperson for the BBC said: "In this heart-warming 30-minute seasonal special, Vicky tells the story of the choir through lockdown leading up to a very special Christmas performance with members of the English National Opera at the London Coliseum for one choir member.

"Mick is living his bucket list while he can and wants to sing on a stage one last time.

"He knows he’s coming to London to sing, but he has no idea where or that Vicky’s also arranged for her co-star on Line of Duty, Adrian Dunbar, to sing with him."

Vicky McClure added: "Ultimately this group of people are determined to continue giving people hope. The most inspiring people I know!

"Get ready to sing along."