In the special one-off animation Tom & Jerry are requested by Sir Terry Wogan to race around the sets of The Apprentice, Strictly Come Dancing and Match of the Day, The Great British Bake Off and Eastenders with a bucket collecting money for the appeal.

For many, a chance to roam around TV studios would be a dream come true...For Tom’s it's just a golden opportunity to catch Jerry!

Inspiration for the cartoon can be traced back to a BBC sketch aired in the early 1990’s which saw Julie Walters complaining about the quality of TV shows, but after bumping into the likes of David Attenborough and Lenry Henry around different studios she decides to drop her concern.

Jay Batian is the Vice-President for Warner Bros; he explains how the company identified with the British TV shows from across the pond. “I’ve not seen Match of the Day, but this is what the internet was made for. We did send models back and forth to make sure we got it right.

“We sent them set photos, clips and publicity pictures. They could see, for example, that Lord Sugar is quite straight-talking and realised it wouldn’t take much to annoy him, so they took that on board and that’s what Tom and Jerry do.” 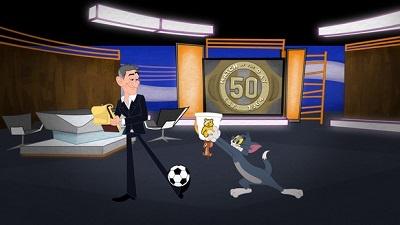 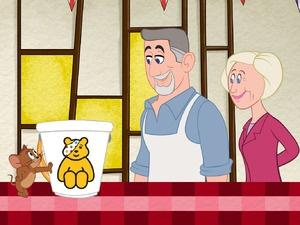 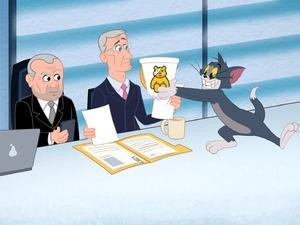 tom & jerry collecting money in the match of the day, great british bake off and the apprentice studios

Despite the cartoon being just two minutes long the project took over six months to put together. You can watch the animation tonight during the programme.

BBC Children in Need is on BBC1 from 7pm tonight 14 November, to make a donation visit the CIN website.