The new season of The Crown tells the story of how the Queen never visited her disabled cousins who were kept away from public eye in a hospital for patients with mental challenges.

When the Queen Mother’s brother John Bowes-Lyon became a father of two girls with learning disabilities, Nerissa and Katherine, the family only received £125 from the royals to cover the care they were instructed to have at Earlswood Hospital.

Nerissa, who was born in 1919, was buried in 1986 with just a few plastic tags and a serial number at Redhill Cemetery.

Her existence was only made public in 1987 when it was decided she should have a proper tombstone.

The ironic twist to this devastating story is the Queen Mother was a patron for the learning charity MENCAP.

In 2011 a TV documentary about the sisters revealed “throughout their time at the hospital, there is no known record that the sisters were ever visited by any member of the Bowes-Lyon or royal families, despite their aunt, the Queen Mother, being a patron of MENCAP”.

In the film nurses at the hospital said the sisters were never sent a card on their birthdays or at Christmas.

Season Four of The Crown covers the storyline which sees Princess Margaret finding out all five girls are alive hidden away in Earlswood when she believed them to be dead.

Margaret never visits the children, but she confronts the Queen Mother telling the royal her actions were “wicked, cold-hearted and cruel”.

During a heated argument on the beach Margaret shouts “Darwin had nothing on you lot! Shame on all of you.” 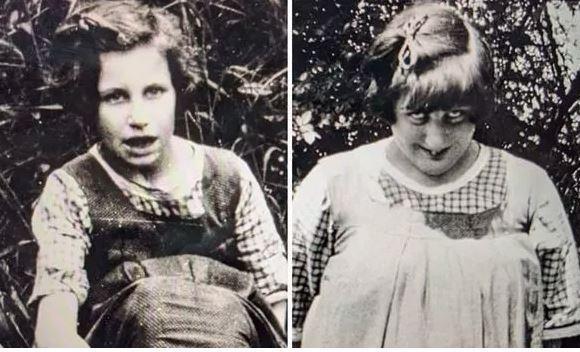 The Queen Mother says it was “complicated” and he five cousins “paid a terrible price” due to the abdication of King Edward VIII.

She goes on to say after becoming Queen if the public knew there were members of the Royal Family with mental disorders they would “question the integrity of the bloodline”.

The Queen Mother adds: “Can you imagine the headlines if it got out? What people would say?

“The hereditary principle already hangs by such a precarious thread. Throw in mental illness and it's over.

The idea that one family alone has the automatic birth-right to the Crown is already so hard to justify.

“The gene pool of that family, it better have 100 percent purity.”

The royal backs her decision by saying the family had enough difficulty when King George III was known for having a mental illness and the Queen’s uncle Prince John was diagnosed with epilepsy and suspected autism.

In the Netflix drama Lord Clinton denies any form of cover-up saying his sister’s mother, Fenella, may had completed a form incorrectly because she was a “vague person” but his excuse is hard to believe as the deaths of the children were recorded correctly.

Season Four of The Crown is available now on Netflix.