Anthea Turner has caused a heated argument after she posted an image of an obese woman in a wheelchair eating a McDonald’s meal having a go at a thinner lady for not wearing PPE.

The cartoon was supposed to highlight the public’s responsibility for keeping everyone safe amidst the COVID-19 pandemic, but there was no Happy Meal for the former Blue Peter presenter.

Turner received a string of complaints on social media saying the picture was disrespectable to people with disabilities.

Realising her blunder the 60-year-old TV presenter said: 'Totally apologise that the cartoon is clumsy - I’ll take the rollicking on the chin

'But this was never directed at people clinically ill who need our support. My passion is sincere though Covid has to give us a bloody big health wake-up call and we’d be nuts not to try and fix it.'

She posted the insulting image at 7pm on Thursday with a follow-up message which read: ‘I’m incensed by the selfish attitudes of people who can’t see we actually are “all in this together” and wilful destruction has an impact on us all especially those with other illnesses pushed down the line and charities who are missing out on funding.

'We have to take responsibility.

‘If the government put half the amount of money into health as they have in locking us up we wouldn’t be in this mess.

Amongst those complaining about the picture was Good Morning Britain presenter Piers Morgan and Labour MP Jess Phillips.

Morgan said: 'What the hell is this? Have you lost your mind, Anthea? Just despicable.'

Phillips tweeted: ‘The Anthea Turner thing this morning has just about done me in.

‘I just wish the idiots would just admit that the wind on their face is more important than my sister in laws life while she has chemo.

‘Stop with the god damn hierarchy of whose life matters!!!’

Another person who took offence was Johanna Jones, a mother to a child with Duchenne Muscular Dystrophy.

She said: ‘How dare you, how ignorant can one person be?

‘I have a son who is a full-time wheelchair user and overweight due to his medication, he is severely medically vulnerable and relies on us who are able to, to wear a mask to keep him safe.

‘Very poor choice of a visual for your argument.’

One reply asked Turner how she thought her late sister Ruth would had reacted to the picture, who was born with Spina Bifida.

The TV presenter addressed the post saying: 'I’ll tell you, Ruth was born with a body that didn’t work and would have done anything to have had legs that worked she didn’t wilfully destroy herself by lifestyle choices that endanger us all in the end.' 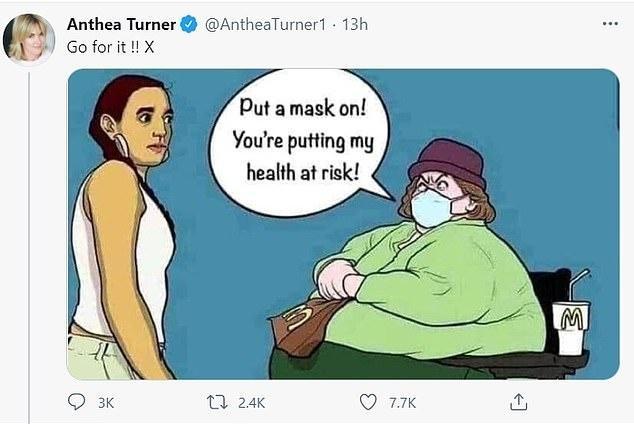