Buried between the musical itineraries at The Great Escape (TGE) festival was something equally as important as checking out up and coming new acts. Selected sessions of TGE convention were working in partnership with a charity supporting musicians with mental health.

The TGE Convention runs parallel with the gigs taking place around Brighton city centre. Whereas the latter attracts avid music fans checking out the next big thing over at the convention programme specific sessions welcome industry delegates to network and exchange advice on how to extend their knowledge of that crazy thing they call the music industry.

One of the four conferences staged by music industry website CMU focused on the impact on the drug culture associated with music community.

The ‘Let’s actually save some lives’ sessions, part of the Drugs Conference, was presented in partnership with Help Musicians UK.

Offering support to new and established talent the charity helps musicians going through tough times, those with a long-term or terminal illness and those going through retirement who rely on additional care as they grow older.

In memory of English Tenor Gervase Elwes, who was killed in a Boston railway accident in 1921, friends of the late performer launched the Musicians Benevolent Fund in 1930.

The foundation was funded throughout the Second World War by donations from concerts staged by pianist Myra Hess and in 2014 the organisation was rebranded as Help Musicians UK.

Over the first day at TGE The Drugs Conference premiered a new documentary hosted by grime artist MC Jammer who shared his own experience of mental illness caused by taking habitual skunk and a session focusing on addiction linked to the rock n roll lifestyle commonly linked with the music industry.

Music Managers Forum’s Fiona McGugan was also on hand offering advice on how the music industry can support people battling addiction and safeguarding the mental health of musicians.

Author of ‘Too High, Too Far, Too Soon’ Simon Mason shared his own experience of mental health caused by addiction during his time working in the music industry which involved finding work as a drug dealer for several bands.

Speaking at the TGE CMU Insights Drugs Conference Mason revealed: “My entry into the world of backstage, and that kind of stuff, was via Glastonbury and other festivals.”

“Prior to Britpop I’d managed to get a job for an organisation that I’d better not mention. It involved having an access all areas pass and joining the dots between what people were looking for backstage but were unable or effectively too scared to go looking for outside the confines of the backstage”.

I was a drug dealer and a drug addict, and I didn’t choose to see any damage.” Steve admitted to the TGE audience. “I saw and heard incredible music being made, incredible performances. I saw a lot of people having a really good time. Part of that was staying awake for a long time, sitting around in fields, or at festivals, or at gigs. And at the time generally feeling like we were a tribe, a disparate tribe. Electronic music and indie music – it didn’t matter anymore. It became this big melting pot, and part of what was melting in the pot was a lot of drugs”.

Mason later became addicted to heroin. He recalled his relationship with the Class A drug and Britpop’s most famous gig of the nineties: “I was at Knebworth for that legendary Oasis gig.”

“I arrived there and I soon discovered that I had left my stash of heroin back in London. So, I needed to trawl through the backstage area trying to find someone that I knew that had a heroin habit. Instead, I was met with this sea of disgust from people”.

“I had all these people with cocaine falling out of their nose at Knebworth talking absolute shit to each other, calling me a junkie. And I’m thinking ‘hang on’, even in my own drug-addled state, I knew there was a discrepancy there, there was some sort of duality, hypocrisy. But of course I paid no attention to it”.

Now clean Mason tours with acts encouraging them to stay off drugs, his recent additions to his CV include travelling the country with The Libertines on their reunion tour.

Taking into consideration most of the venues which form The Great Escape are quite old the access wasn’t ‘too bad’ although some buildings were not suitable for wheelchairs.

The festival organisers gave priority wristbands to ticket holders with disabilities which gained them access without having to queue.

Most venues went the extra mile to assist people with disabilities apart from Sticky Mikes and Kormedia Studio.

What did you think of the Access at the TGE in general? 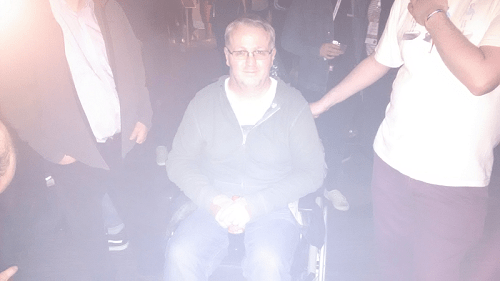 ‘I was unable to watch a band at Sticky Mike’s because the venue didn’t allow me to take my wheelchair downstairs. Instead they just gave me a child’s chair which, personally, I don’t think was very appropriate. Although overall the access has been quite good at other venues.’

Ian (watching The Amazons at The Wing, Brighton)

For more information on access at next year’s TGE check out our festival guide.