Imagine, if you will, one of those long hazy summer afternoons where you just chill all day in the sunshine, reminiscing about days gone by and listening to music which although does little to move any muscle is enough to accommodate your blissful day in a sufficant and amicable mood.

Any of the five or upcoming albums by Elizabeth Woolridge Grant would be the perfect match for such hours. Of course, it wouldn’t be her real name titled on the covers of records such as Born to Die, Ultraviolence or Lust for Life. Since her first release, Video Games, in 2011 Lana Del Rey has made a steady and successful music career worldwide.

Today is one of those warm Sunday evenings, although it’s the final word which sparks a surprise. The NYC singer is closing Latitude festival, but is her mellow work strong enough to keep campers onsite when some are more focused beating the traffic and more importantly having that decent shower which is now seems like a long distant memory.

She’s twenty minutes late but Lana will make it up to her fans which are evidently taking up the first few rows in front of the Obelisk Arena which has showcased its fair share of women performers throughout the day with sets from the likes of Cat Power, Sigrid and Chvrches.

It’s quite a year for her, 2019 sees the release of Lana’s debut poetry collection but before those verses are released to public domain there’s the small matter of her first UK festival headline slot. To mark the landmark she doesn’t walk on stage empty handed. The set comes complete with backing singers, a piano, a screen projecting 70’s films from her hometown of LA and a bloody great tree!

Starting with the title track off her second album, Born to Die, Grant seems happy to be in the same country which made the album platinum three times over.

“Can’t believe I’m back in the UK’ she tells the Suffolk festival, “and not too far from London.” The geography remark may had been lost on some cockneys sat in traffic a few days ago, but there you go!

She picks Cherry off the setlist, with the song still ripe from her latest album (released in 2017) Lana moves position to perch on top of the piano as we jump in her White Mustang and trail down the bumpy road of a story between Lana and a crazed fan. Judging by the hysterical cries from the crowd when she walks over to the musical instrument we wouldn’t grudge her putting out some restraining orders for the rest of the night!

Not one for standing still Pretty When You Cry sees Lana joining her dancers lying on the ground like the worse synchronised swim team this side of the river which runs through the festival. The aerobatic display is caught on screen before she dives into the pit.

You may think a belly-flop into the divider which separates performance art from hysterical fans signals a quick dash of high-fives on hands which will remain unwashed for the same amount of time it takes for crusty festival wristbands to finally deteriorate. Not on Lana’s watch! She spends the next five minutes or so signing autographs, collecting gifts and posing for selfies. You know how Tom Cruise works the crowds at a film premiere whilst the VIP cinema goers become ever more irritated inside waiting for the movie to start? It’s kinda like that as a large percentage of the arena stand patiently for the next song, or in some cases start to leave.

As a plethora of social media users start to boast about meeting their idol normal service is eventually resumed with Mariners Apartment Complex, a track taken off her forthcoming album Norman Fucking Rockwell which tells the tale of experience she had at one of her boyfriend’s friend’s house one night.

Following a melody of tracks off her recent album Lana dancers jump on swings as they relive their childhoods for Ride which is followed by Video Games, accompanied with snapshots of films which take us back to the days when we were controlling a yellow monster gulping energy pills to escape ghosts and helping a frog cross a road.

Earlier this year our own little Space Invader dropped a cover of Sublimes Doin’ Time for a documentary based on the iconic Californian band. Tonight as the sun now set it’s a perfect musical portrait for the final few hours of livin’ easy of this summer night.

After National Anthem beach-balls are thrown into the crowd as they ricochet from head to head to the sounds of Summertime Sadness – it’s quite a perky, upbeat moment to a set which has been considerably uneventful in comparison to our average rock group who are usually booked for headline slots.

Those who made bets back in 2006 when Lana Del Rey was scouted by an A&R rep after her debut performance at a song-writing competition that she would be closing a major festival within thirteen years should start counting their winnings as despite losing a proportion of the crowd when she sings her penultimate number, Off to the Races, she may not be bookies favourite to close a Pyramid Stage but we wouldn’t be surprised to see her on the bill at quite a few festivals in the future.

Our lazy hazy Sunday evening comes to a close with Venice Bitch, it’s another unreleased track off Norman Fucking Rockwell, not what you’d expect as a closer, but Lana isn’t your typical performer. She’s always full of surprises no matter what time of day it is!

The accessible facilities at Latitude are hard to fault. For starters there’s an access loo situated next to the access check-in point where you can collect your wristbands.

Opposed to previous years PA’s are allocated a paper wristband instead of a laminate.

If you wish to use a locker, situated in the accessible campsite you can pay your £25 at the check-in point before driving your car down the track where you can unpack your camping equipment in the spacious field.

If you required any help over the weekend Attitude is Everything were on hand in their Information Tent based in the accessible campsite.

There were plenty of access toilets in the campsite which carried the polite notice asking people to use the non-disabled loo if possible.

Accessible showers and a changing places unit were also situated in the campsite.

Going to and from the arena was made easier thanks to a buggy service which ran until at least midnight throughout the whole weekend.

There were viewing platforms available at the Comedy tent, BBC Sounds Stage at Obelisk Arena with BSL interpreters for chosen performances a list of which could be obtained at the Hearing Loss information tent located in the festival grounds as well as the Attitude is Everything information tent.

Accessible toilets at the viewing platforms were extremely secured and requested a member of staff to open a fence to allow access.

Unfortunately there was no dedicated access area at the Speakeasy, Cabaret and the Music & Film Arena, which was a bit of a shame.

In the village you could visit tents manned by the Samaritans and mental health charities.

Most of the films shown in between the acts were subtitled.

The bars had a dedicated serving area for access customers, although for some reason the serving area for one side of the Obelisk Arena was the furthest possible point from one of the viewing platforms.

Pretty When You Cry

Off to the Races 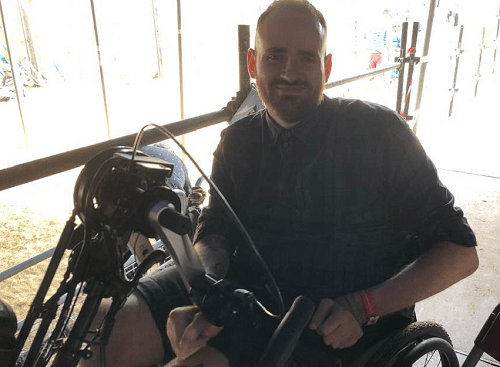 The toilets were close and the staff are helpful although some of the viewing platforms are very restricted on space when the main acts are performing.

The staff put us in a BSL interpreters section at the comedy tent because the viewing platform was full with ambulant users so we felt guilty taking up the area reserved for people with hearing loss.

View from the accessible platform for the Obelisk Arena. 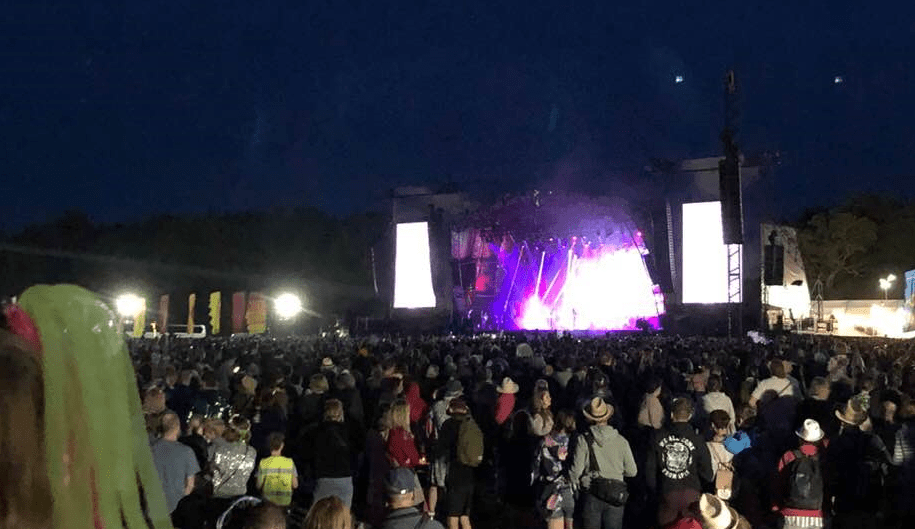