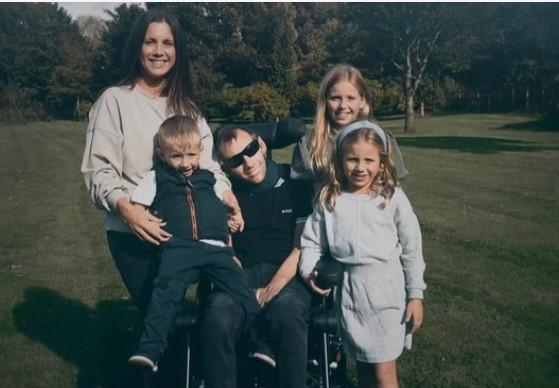 A new BBC documentary airing tonight, Tuesday 18 October, follows a Rugby League player who had his life turned upside down three years ago.

In December 2019 Rob Burrow was diagnosed with motor neurone disease (MND), he was told he would die within the next two years.

Defeating the odds, Burrow is still going, he’s alive and the centre of attention of Rob Burrow: Living With MND. A 2022 film which no one expected would happen.

The documentary speaks to Rob’s family including his wife, Lindsay, who he met in his teenage years.

They have three children, 10-year old Macy, Maya (7) and three-year-old Jackson, but Lindsay now has to care for Rob, who is now 40, as well as the kids with the support of his parents Geoff and Irene.

In the film we also hear from the NHS team who Rob visits on a regular basis and his former Leeds Rhinos team mate, Kevin Sinfield OBE who have raised millions of pounds for MND research since his best friend was diagnosed with the illness.

We see Rob being carried to bed by Lindsay, being a typical cheeky son telling his mum “she has a gob on her” and how proud his dad is watching his children on sports day.

Rob says in the film: I’m a prisoner in my own body, that’s the way MND gets you, the lights are on, but no one’s home. I think like you, but my mind doesn’t work right. I can’t move my body,” and that “he’s not giving in, right until his last breath”, because he has “too many reasons to live”.

His friend, BBC Breakfast presenter Sally Nugent, said: “This film shares the brutal reality of living with motor neurone disease, not just for Rob, but the impact it has on his whole family and friends. What he is doing will have a lasting legacy for people diagnosed today and in years to come.

“The documentary is an unflinching look at life through Rob’s eyes. We see him fight daily for small victories that we might take for granted. Every breath is a battle. Every moment with his family is a win for them all. But he is as funny today as he was the first day I met him, when he was just one of the greatest rugby league players of all time. He is still that, and so much more.”