A UK theme park has been criticised for telling a mother she had to prove her three-year-son Harrison was disabled in order to gain free entry despite her three-year-old being in a wheelchair.

According to Sophie Figg she had to wait 70 minutes outside the entrance to Gulliver’s Land in Milton Keynes after the staff questioned the toddler’s height. The mother said she was told to lift her child up to be measured as he is unable to stand up independently because of the weakness in his legs.

Sophie was then asked to provide proof her son had a disability. Following the ordeal she has called for the park to review their accessibility policy.

Figg told The Sun: "I feel appalled. Harrison had just as much right to be there than anyone else.

"They treated him like he was a shell, not a person.

"Harrison and my niece should have got in free because they were under 90cm, however a young female staff member insisted that he must be measured. I told her he can't hold any weight in his legs but she still insisted.

"He's actually short for his age and has to have growth hormone injections. He's clearly under 90cm.

"She then said 'prove he's disabled'. I think she meant by showing a disabled badge.

"I know not all people with disabilities are in a wheelchair but it's common sense to see that if someone is in one, then they are disabled. He's also on a feeding tube for 21 hours a day.

"The staff member said 'you're not coming in'. She kept going backwards and forwards to her manager asking him what to do."

After nearly an hour the manager eventually came out to speak to Sophie, who was intending to visit the family attraction with her sister and a group of friends.

"The manager came out to speak to us and you could tell straight away he had a chip on his shoulder. It was like we'd ruined his morning,” Sophie told the paper.

"He said to me straight away 'I can tell he's over 90cm'. He had a blanket over his legs and for all he knew he might not have had any. 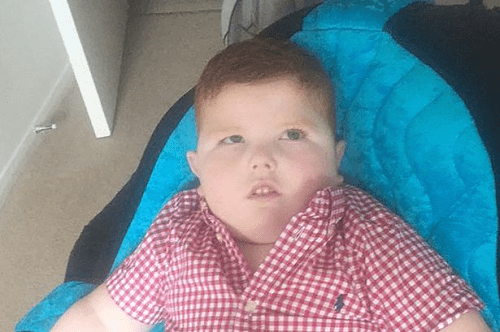 Harrison in his wheelchair

"He said 'well she's definitely over 90cm' about my niece. She's actually at least 10cm under that or we would have paid for her.

"We asked the manager for a refund and we would leave, but he laughed and walked off.”

Harrison, who has Septo-Optic Dysplasia, was ‘pinned against the wall’ to prove he was under 90cm in front of the crowd queuing outside the main entrance.

Sophie added: "I would have happily walked away if they'd have given us a refund for my sister's and friend's tickets but they refused.

"The only reason we stayed was because we had the kids with us. It would have been cruel to let them see the rides from outside then say we were going home.

"Then they told me 'pay for him now and you can measure him later.' That wasn't the point – it's no different there or at home. "

A witness has now raised a formal complaint to the head office.