Iain Duncan Smith is our first ‘Loser of the Month’. He earns this prestigious award for replacing the Independent Living Fund with a new ‘risky’ disability allowance. Paying a visit to a factory without doing his homework and embarrassing himself in front of a handful of people.

George Iain Duncan Smith was born on 9 April 1954. It was a straight-forward birth. None of this ‘starving of oxygen’ business or missing limbs which currently affects 11.9 million people across the UK. He was born ‘normal’.

The term ‘normal’ is one of the many reasons why Smith has been crowned our very first ‘ABLE 2 loser’.

A few months ago Smith referred to non-disabled people as ‘normal’. Maybe he’s right…As it seems out of the norm to have your benefits taken away from you and forced into employment if you are suffering from a long-term illness. Which is exactly what is happening under the disability benefit reform he introduced in 2012.

Smith even had the audacity to announce the new benefit system on the United Nations’ International Day of Persons with Disabilities.

The conservative MP faced fierce criticism from charities across the UK highlighting drastic the affects which will be caused by cutting social care services and scrapping the Independent Living Fund…But he ignored the concerns and went ahead with his ruthless plans.

Whilst he continues to take away vital pennies from the vulnerable Smith has racked up an estimated £1 million from making after-dinner speeches, although one such event didn’t go quite according to plan…

‘An Audience With Iain Duncan Smith’ took place at the Liverpool Philharmonic Hall in 2004. The venue capacity is 1,600 although as you can see from the picture below only 67 people bothered to turn up and most of those were journalists who had been dragged to the dull event. 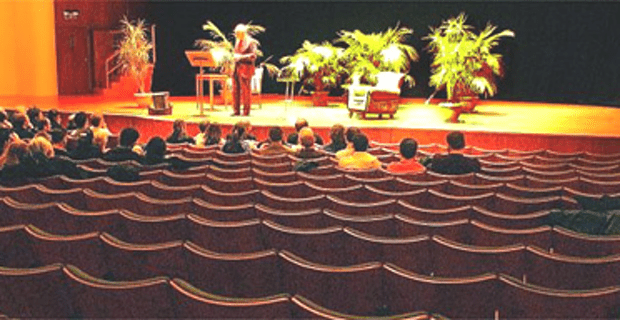 The 'sparse' audience at 'An Evening with Iain Duncan Smith'

In 2012 Smith said disabled people employed by Remploy are “not doing any work…just making cups of tea”. We responded to this throwaway comment by making this call to his parliamentary office.

Trying to boost his public image Smith paid a visit to a factory which employed disabled workers. The PR stunt in 2015 backfired…Smith was unaware the firm was being forced to make compulsive redundancies because of the cuts being enforced under his new scheme.

At the Conservative Party conference this year Duncan Smith said disabled people should work their way out of poverty. His comments received mixed reaction from disability charity Scope who said they agreed disabled people need more support finding work placements, although cutting their benefits was not the solution.

It’s for these reasons amongst many more why George Iain Duncan Smith walks away as an ABLE 2 loser award. Congratulations sir…You really deserve it!

On Friday 18 2016 Duncan Smith made a surprise U-turn when he resigned from his parliamentary position as Work and Pensions secretary because he was unhappy with the chancellor’s decision to cut 40% from disabled benefits.

Who would you nominate for future Loser of the Month? Use the hashtag #able2loser on Twitter which a brief explaination and we could be in touch.