A disabled man has lashed out on a pair of teenagers who designed and used a fake blue badge – which wasn’t even blue!

Dez Richardson has a legit accessible parking permit, so when he spotted a car displaying a McDonald’s bag paper with a sketch of the disabled man in a wheelchair he wasn’t best pleased.

The 38-year-old dad of two from Mossley, Greater Manchester, parked in a local Tesco car park when he saw the makeshift badge.

He said:  ‘I was parking in Tesco car park and this fella pulled in next to me – he was probably about 19 or 20 and had his lass with him who was about the same age.

‘They got out laughing and chuckling to themselves and I noticed something out of the corner of my eye on the dash as I walked around to my wife’s side of the car.

‘I thought “that’s not a blue badge” so I had a look and saw what it was – I just thought “you are kidding me”. 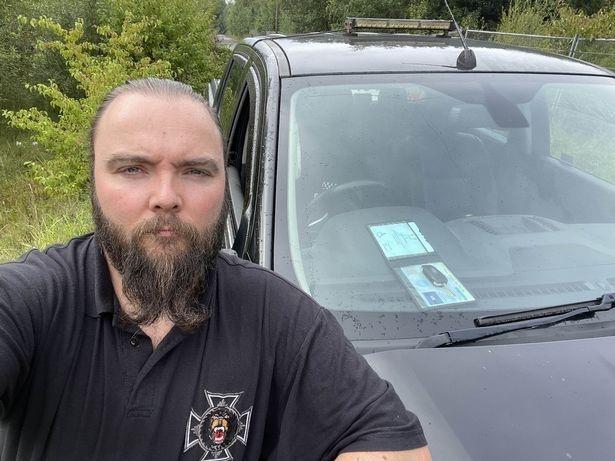 Dez Richardson next to his car displaying a valid blue badge

‘You’ve got almost an entirely empty car park but you’ve chosen to go out of your way to behave like this – what does it actually achieve other than show-boating your own selfishness?

‘It wouldn’t have been as bad if nothing was there but it was the fact that he went out of his way to draw a fake badge just to take the piss, that’s just taking time to be intentionally obnoxious.’

The HGV driver, who has pain in his spine and knees, tried to shame the culprits on social media but his ploy backfired when a number of people told him the two teens may have hidden disabilities themselves.

Richardson said: ‘I’m well aware and respectful of invisible disabilities but he was clearly an energetic young lad and I just thought there’s no way – you just can’t believe the audacity of it.

‘My understanding is that if you have a blue badge you use it and if you don’t have one you don’t use a bay.

‘What that behaviour exhibited was just a complete arrogant entitlement – you don’t go out of your way to draw something like that and pretend to be something you’re not.

‘I’m a blue badge holder myself and earlier that same day I had a woman challenge me over mine because I don’t look obviously disabled.

‘The circumstances were completely different because I am a legitimate badge holder and this guy had just clearly gone out of his way to mock everyone that is.’

The incident occurred at a Tesco car park in Stockport.