Adele has shown her softer side once again by meeting another disabled fan during the UK leg of her world tour.

The singer met 7-year-old Ross Donnan, who has KCNQ2 , a global developmental delay , epilepsy and severely sight impaired backstage at the O2 Arena on Friday night.

Ross’ parents reached out to the Make-A-Wish charity to see if the organisation could arrange tickets for one of Adele’s show. Their request was met, although the star had an extra surprise in store for one of her most die-hard fans.

When the family arrived at the London venue they were ushered backstage so Ross could have a private meet-and-greet with his musical hero.

Mrs Donnan said: “It was absolutely amazing, my little Ross has loved Adele since he was 2. He's grown up with her and all her music.

"We didn't know until the very last minute we were going to meet her. She was lovely and had obviously seen lots of our Twitter feed, she asked about his brothers and wanted to Facetime everybody back home."

Adele also gave Ross a ‘private gig’ when she sang his favourite song, ‘Someone Like You’. The award winning singer also dedicated the number to him when she performed the track in front of the sold-out arena. 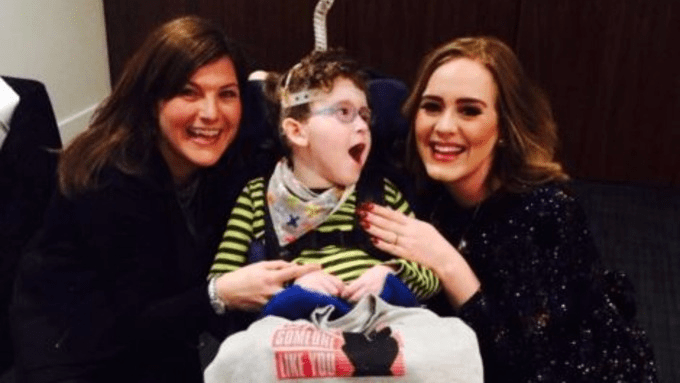 Mrs Donnan said: “Ross was really amazed during the concert – it was a wonderful show. Parts of it, when I looked at his face, he was completely mesmerised. Some of the songs are instantly recognisable and he was awestruck.”

Adele has also made two other disabled fan’s dream come true. In Manchester she invitied a girl living with ADHD , autism and Ehlers-Danlos syndrome to join her on stage and paid a private visit to meet a seriously ill fan before her tour kicked off in Belfast.

Adele, we know you are probably far too busy to read this website – But we just wanted to tell our readers you are now an ABLE2UK hero!

Adele is currently touring the UK and playing Glastonbury Festival in June.