XT11 – not the catchiest name to christen your daughter but in fairness it’s the title given by a group of researchers who discovered her. Her being a chimpanzee with the human equivalent of Down Syndrome .

The young chimp was cared for by her mother, 36-year-old Christina. XT11 lived for 23 months, it’s likely her life would had been considerably shorter if she hadn’t ben neutered by her mum.

Christina and XT11 were discovered in Tanzania’s Mahale Mountains National Park. The baby chimp was totally dependent on her mother’s milk long after she should had been weaned.

Addition to her physical disability XT11 had spinal damage, an extra finger on her left hand and a hernia on her stomach. She was unable to sit independently, kept her mouth half open and empty looking eyes. The chimp was never seen eating any plants. 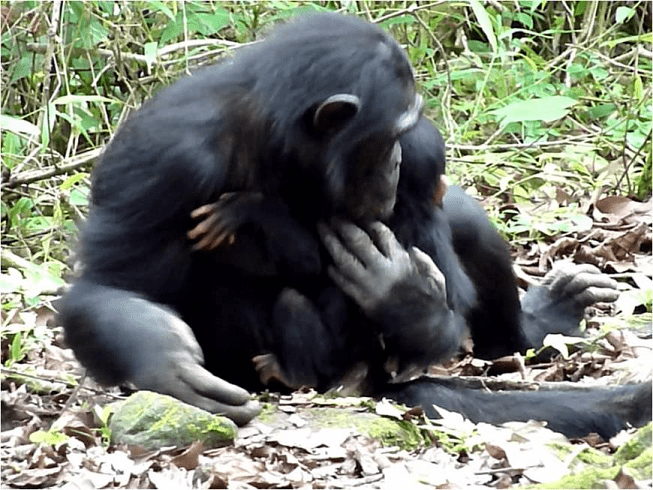 Christina looking after her child, XT11

Unlike most instances in the Animal Kingdom Christina paid extra attention to her disabled baby, she stopped hunting for ants in tress as she needed to carry her daughter. She also groomed XT11 and played with her although she wouldn’t allow any relatives to make physical contact with her precious child.

The specialised care stopped when Christina’s sister gave birth to her own child.

Authors of the observation wrote: "The mother of a severely disabled infant probably experiences more stress than other mothers because she must provide intensive care for longer,"

Christina – You are our first non-human ABLE2UK hero!