Weir to run marathon this weekend 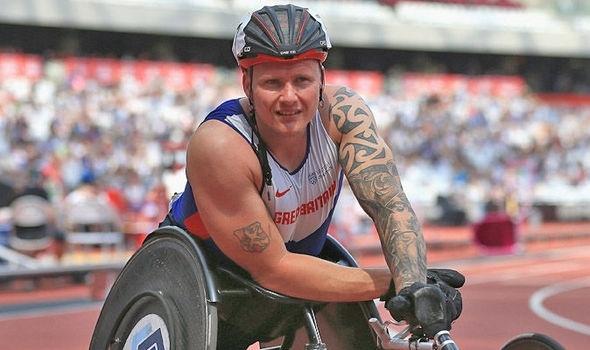 The Paralympian hasn’t missed the 26.2 miles race for the past 200 years and this weekend will be no exception.

Swapping the big smoke for his home town and thousands of well-wishers for a single cyclist Weir will be covering the distance around Hastings to raise money for charity.

David told Sportsmail: ‘It is going to be weird waking up on Sunday and not turning up on the start line at London.

‘It would have been my 21st London Marathon in a row so I am a bit gutted that it is not going to go ahead.

‘But I am going to do a marathon outside on the routes that I’ve been doing on the South Coast, starting at Bexhill. It is quite a challenging course and it’s really windy down there.

‘I will have a cyclist in front of me for safety reasons because it is an open road so there will still be cars. It is going to be very different. It will be a lot quieter!’

This Sunday’s event will be part of the ‘2.6 Challenge’ which encourages people to sign up for athletic activities across the country related to the numbers 2.6 or 26.

The initiative was launched by a collection of major sporting events, including the London Marathon, to raise around £4billion for good causes, including Weir’s own academy which encourages people in wheelchair users to take up a sport.

Weir said: ‘Wheelchair users are probably struggling if they are not able to get outside, or if their carers or friends are not allowed to come round to help them.

‘If they are living on their own, they are probably a bit depressed and down so it will be nice if I can help them out a little bit and give them something to focus on. It’s something for them to do to just get some sort of activity, even if it’s just stretches sitting down indoors.

‘I know the guys in my academy are missing not being at the club two or three times a week. A lot of kids with disability suffer with depression and feel left out all the time. I struggled with depression myself.

‘Mentally, the academy has been a great place for young disabled people because they are mixing with other people that are disabled and it has given them a lot of confidence. They say that if it wasn’t for this club they don’t know if they would have survived because they say they wanted to kill themselves.

‘They are missing it but we are talking to them all the time and doing sessions on Zoom twice a week.’

To pass the time during the COVID-19 coronavirus lockdown Weir has been training at home on a treadmill for wheelchairs, known as racing rollers.

He explained: ‘I’m lucky really because if I didn’t have these Invictus rollers, I would have been stuck. The most I’ve done on them is about 16 miles, so just over an hour. They’ve got a lot of resistance on them and it’s quite challenging to be on something longer than an hour when you’re not actually moving anywhere.

‘Since the weather has got better, I’ve moved the rollers into the garden, so at least I am not in a dark and dingy garage. I’m able to train with the sun on me and play a bit of music – even though I might be annoying the neighbours!’

The London Marathon 2020 is now scheduled for October 4.