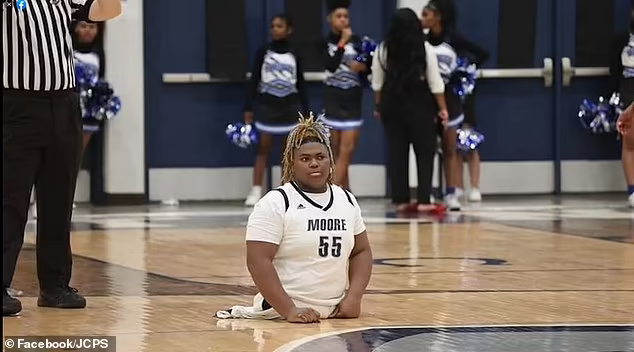 Teenger Josiah Johnsoon has bagged a place on his high school basketball team. Granted, this may not seem like a worthy news story, but when you hear that the lad was born without any legs…it’s pretty impressive! The 13 year-old from Louisville, Kentucky, was chosen for the team at Moore Middle School in the Autumn, he’s now one of their star players.

'He started taking the ball from people.He took the ball from me. I was mad. You would have thought Steph Curry was in the gym,’ one of his teammates told CBS News Johnson was given the option to play in his wheelchair, but he decided that would be too easy. 'He made the team - we didn't put him on the team for no sympathy reasons or anything like that,' said one of his coaches. 'He showed up to every trial, he gave it his all. He put himself on the team by making the squad.' As a kid Johnson was a keen gymnast, but his heart always lied in basketball. His mum, Whitney, knew he had it in him, even from a young age Johnson was very confident and stubborn. Josiah is very competitive, and if he feels like something is too easy, he's not going to do it,' she said. His teammates say Johnson is a pro at stealing the ball, passing and dribbling on the court, making it a challenge for any fellow player to compete against him. 'People feel bad for me playing basketball,' Johnson said, in an interview with Jefferson County Public Schools. 'I want to show them that you ain't got to feel bad for me. I want to play on an equal level with you.’ A particular highlight occurred a few months ago when Johnson scored from outside the three-point line. His teammates were so thrilled they picked him up off the floor in a group victory hug. 'It was just a moment that I'm going to remember forever,' remembers one of his fellow players. When asked what Johnson wanted to achieve he replied to make others ‘do something that they thought they couldn't do.'