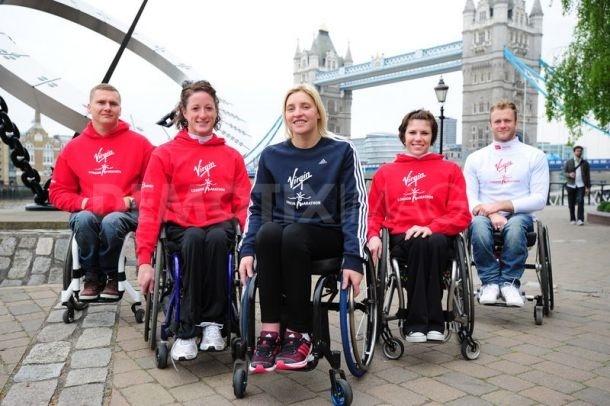 David Weir and Amanda McGrory had something to celebrate yesterday after winning the Men and Women's Virgin's London Marathon Wheelchair race.

Weir seems to be on a running streak at the moment, last November he won the New York marathon and the London race in 2002 and from 2006 to 2008.

Despite the sport being an individual achievement Weir had support from one of his competitors during the final few meters. 53 year-old Heinz Frei, a Swiss runner finished the race .02 of a second after Weir, who completed the marathon in 1:30:05. It's a shame Heinz wasn't able to 'ketchup'!

Weir said, "Heinz turned to me and said, 'I'm going to help you. That just shows how much respect we have for each other."

If Weir finished two seconds faster he would have wheeled away with a new world record.

The British champion paid tribute to his coach, Jenny Archer and with 500 days to go hopes to return next year for the Paralympics games.

American Amanda McGrory managed to beat her personal best and set a new record completing the marathon in 1:46:31; although she took first place from British athlete, Shelly Woods.

McGrory has also celebrated another achievement, last Sunday she came first in the Paris Marathon.

"With about a mile to go there was still four in within a chance, but I was confident in my finishing speed. I looked down at my clock and thought the record could be on." Amanda said.

The runner is also setting her sights on an even more impressive victory,

"Even though the record was broken today, 1:43 is still possible here in the future. Now this race is over, it's ok to look forward to the big event in 2012."