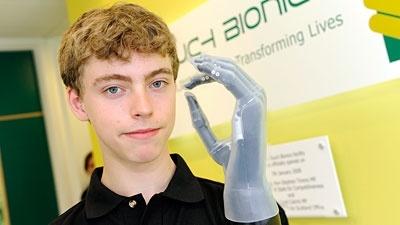 14 year-old Matthew James had a dilemma, it wasn’t the fact he was born with just one hand, the problem was the i-Limb Pulse which he wanted to compensate for his missing left one.

The i-Limb pulse, designed by a Scottish firm comes for a price, £30,000 a sum the James family couldn’t afford despite raising funding towards it.

Matthew’s school in Reading was recently paid a visit by Ross Brawn, the boss of F1 so doing his own homework, Matthew decided to write a letter to him to pay for his new bionic claw, in return he promised to have his new hand sponsored by Mercedes.

His boldness paid off, Matthew was invited to have a tour of the Mercedes factory and a member of the F1 team touched base with Touch Bionics, the company who makes the i-Limb.

At first one might think it’s a bit random for the boss of F1 to fund a prosthetic hand, but there is a connection. Both companies use the same technology and after F1 settled a £25,000 deal to pay for the arm the firms shared their technical knowledge between each other.

Matthew had his new arm fitted last Friday and has told the press he is now being asked to carry out more chores around the house!