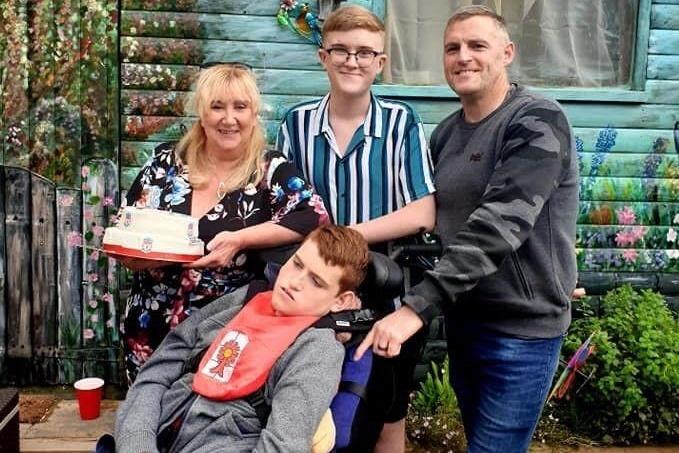 A mother of a disabled teenage boy has asked locals to stay at home to limit his chances from catching the COVID-19 coronavirus.

Eighteen-year-old Cameron Clalow from Newcastle, who uses a wheelchair, has had a rough ride recently, last year he underwent his second major operation which left him on a ventilator after a lung collapsed and he developed pneumonia.

Doctors now warn if he catches Covid-19 it could be fatal and to make matters worse, there’s a high demand for ventilators because of the coronavirus pandemic.

The boy’s mum Nicola is concerned her son may be exposed to the virus if he needs to go into hospital because of his existing health conditions.

She told News and Star: “The problem for vulnerable people is that – no matter how hard we’re shielding them at home – if they need hospital treatment the likelihood is they’ll catch Covid-19 in there and then if they’re lucky enough to even be offered treatment, they have a very low percentage of survival.

“So the more people who isolate, the fewer the people who will get infected; and the less likely they are to spread the virus in hospital and then the more likely it is that my son will survive.

Nicola continued: “If you leave the house today for anything other than because you are a key worker, to get absolutely essential shopping, or to take a short walk you could personally be condemning my son to death.

“Think on that for two minutes please. He’s 18 now and has complex and multiple learning disabilities, no speech, epilepsy and now respiratory problems.”

After the College Healthcare NHS Trust said intensive care is being considered to patients who are “reasonably certain” Nicola is uncertain if her son would qualify.

She said: “Initially my GP rang me to say that if Cameron was hospitalised he may not be offered a critical care bed,” Nicola continued. “We discussed nursing Cameron at home and where I’d want his last days to be.

“The doctor agreed to put into his notes that Cameron should not be assessed on the basis of his disabilities but on his past ability to fight and recover from very serious illness.

“My biggest fear of all is that Cameron would be taken from me, and unable to communicate his thoughts and feelings.

“Nobody would understand his care requirements as I wouldn’t be allowed to be with him when he needs me most and that’s what scares me most of all. I just don’t think people breaking the stay-at-home rules or finding ways round them realise the more the virus spreads, the more pressure there is on the NHS and the more chance my son and people like him will die.”

A 90 year-old woman in Belgium has died of coronavirus after refusing to use a ventilator.