Teenger Josiah Johnsoon has bagged a place on his high school basketball team. Granted, this may not seem like a worthy news story, but when you hear that the lad was born without any legs…it’s pretty impressive! The 13 year-old from Louisville, Kent...
Jan 23, 2023 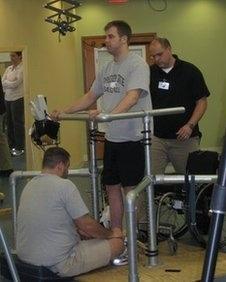 Rob Summers was an avid baseball player; in 2006 his team won the College World Series and his future in the sport looked bright, but his sporting ambitions were taken away from him that Summer when Summers was a victim of a hit and run accident.

The incident left Rob paralysed after his spinal cord was severely damaged, but thanks to his sheer determination Mr. Summers has managed to stand on his own two feet again after undergoing a series of electrical stimulation.

With 16 electrodes implanted into his spine and vigorous daily exercise electric pulses were sent to his brain and within days Rob could control his legs and stand up independently. He also managed to regain control of his bowel and bladder movements.

Before every paralysed person theoretically jumps for joy and rushes to find their car battery charger Dr Melissa Andrews, from the Cambridge Centre for Brain Repair doesn’t see this as a possible cure for Spinal Cord sufferers.

She said “I think people need to read this and say the possibility is out there, but it may not come tomorrow. It's the closest we've ever seen and it's the best hope right now."

In the meantime let’s wish Rob the very best of luck and hope one day he can return to first base and score a few more Rounders for his winning team.