Summer. Partying. Lack of sleep. Just one place comes to mind when these words are put together and you don’t need a few happy pills to work out we are talking about Ibiza!

The ultimate holiday destinations for those looking to party will welcome thousands of holiday goers to its shores over the next few months – One of them will be forty-seven-year-old Gerald Masterson.

Gerald has cerebral palsy – he’s always wanted to spend a week on the Balearic island but cuts to his benefits meant finding someone to travel with would be as difficult as finding a cheap drink in Privilege.

Mr Masterson from Glasgow used to be entitled to a higher grant which allowed him to cover costs for carers to go on holiday with – but under the new Personal Independent Payment Gerald’s allowance has seen a dramatic cut.

Despite needing around the clock support Gerald was determined to join the 24 hour party people in Ibiza after saving up £5K for a break he would never forget. 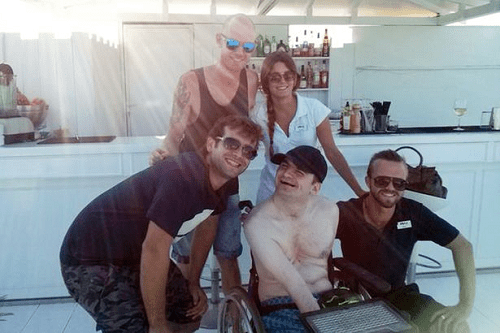 As he could no longer afford the care he needed Gerald reached out to strangers through Facebook until he found two people willing to enjoy him on the White Island.

Hopefully his travel companions can stand the pace as Gerald is known to party until 7am before going to daytime raves.

He told: “I will pay for ­everything and they will do shifts.

“One of the girls came to see how we would get on and she asked a friend of hers to go too. I’ve only met them once but we talk on Facebook and get on well.

“I feel everyone should be able to have holidays and shouldn’t have to worry about people taking them and how much extra it will cost.”

Gerald admits he is ‘lonely’ but he feels welcome in Ibiza because “he has made so many friends there that are like family to me. If I went out on a Saturday night here, I wouldn’t have the money to go away so I just stay in.”

He added: “I am worried about what the future will mean for funding. I just want more people like myself to be able to do things like I do.

“Ibiza is such a nice place, I would move there if I could.

“But funding is a big problem so I’ll have to stick to my holidays. I want to keep going there for the rest of my life.”

The video to Wham’s ‘Club Tropicana’ was filmed at Ibiza’s Pikes Hotel.