Rosemary Johnson’s time in the Welsh National Opera Orchestra was dramatically cut short when she was 22.

Following a car accident Rosemary was trapped in a coma for six months, when she woke her life had changed. She could no longer speak and suffered severely limited movement around her body. For 27 years Rosemary’s dreams of perusing her love of music had been shattered.

Now, thanks to a new device launched by the University of Plymouth and the Royal Hospital for Neuro-disability Johnson is back making music…by using her brainwaves.

The EEG cap collects electrical data from the brain transforming them into coloured lights which can be chosen by the musician on a PC screen. The gadget allows the composer to change the volume and alter the mental focus “intensity”. 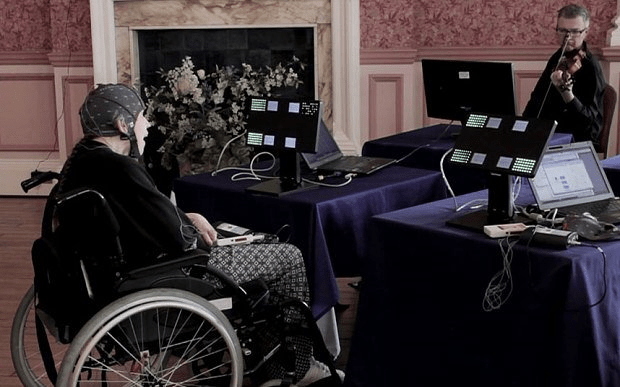 Composer and director of Plymouth University’s Interdisciplinary Centre for Computer Music Research, Professor Eduardo Miranda said: “The great achievement of this project is that it is possible to perform music without being able to actually move,

“It was really very moving. The first time we tried with Rosemary we were in tears. We could feel the joy coming from her at being able to make music. It was perfect because she can read music very well and make a very informed choice.”

Rosemary Johnson after the car accident

Rosemary has joined four other patients from the hospital to form The Paramusical Ensemble, a quartet whose musical thoughts are put into practice by the Bergersen String Quartet. The group have already recorded their first track, “Activating Memory” which will be performed at this month’s Peninsula Arts Contemporary Music Festival in Plymouth later this month.

PHD student Joel Eaton said: “One of the key things about this system is that not only does it give a user the interaction and control of an instrument, it allows them to interact with each other.”

“If this idea was developed, it could have ramifications in all areas of someone’s life. Potentially I can see the ability for someone to express musically how they are feeling again without their ability to move their fingers, to communicate with words.”