A new company is offering a literal out of this world experience to disabled people who are interested in space travel.

Thanks to Mission Astro Access the first crew have recently been blasted off on a zero-gravity flight, one of the cadets was Sina Bahram from North Carolina.

The computer scientist has vision loss, but his disability did not stop him or the other 11 disabled ambassadors from signing up to experience the sense of weightlessness.

Bahram told the BBC: "I've wanted to do this since I was four years old, but the underlying assumption was 'that's totally impossible'.

The crew flew to Long Beach, California in October to board a Boeing 727 which fell into weightlessness for around 20 seconds by flying in large arcs.

Bahram described the sensation as: "It's not that you're floating up, it's that you're no longer getting pulled down.

"You're sitting on the ground, you push off so much as with one finger and you're floating."

"I was expecting disorientation, [but] once I started getting used to zero-g I immediately found it comfortable and easy for me to push off with less force and to use a little more finesse."

On the flight he tried using audio beacons to navigate by sound, but it didn’t go quite according to plan…He couldn’t hear them!

However, towards the end of the parabola something special happened, "many of us in the blind and low vision crew were able to find our mats," Bahram said in astonishment.

"That was just really a testament, both to our internal working memory and all the solutions we've had to come up with on earth." 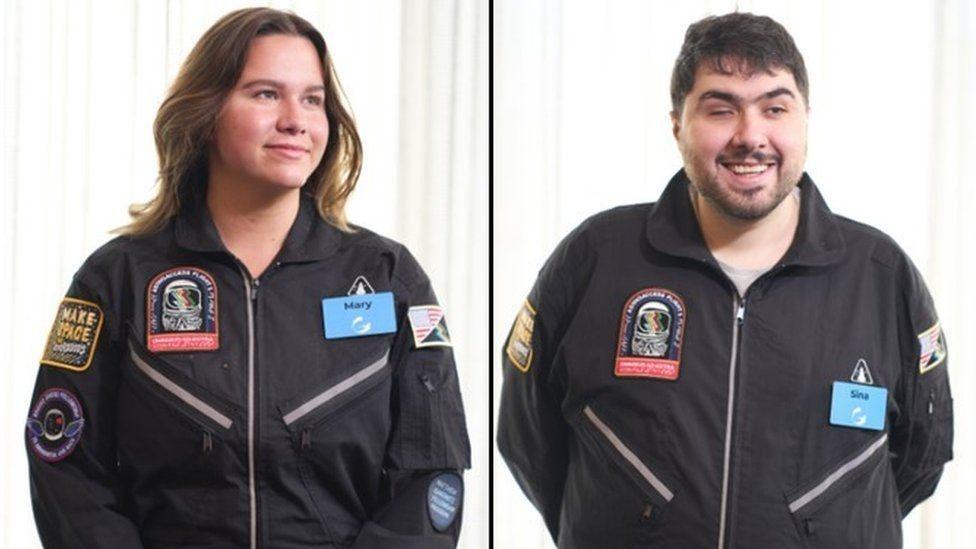 Ambassador Mary Cooper said: "The moment it actually sunk in was when they closed the cargo door.

The aerospace engineering and computer student at Stanford University was born with fibular hemimelia which led to having her left leg amputated below the knee when she was a baby.

When the weightlessness kicked in Cooper felt totally free and, for once, she did not need to rely on her prosthetic leg.

"I was able to let my leg go, just let it fly. I had this moment of flipping around, doing cartwheels. And that was such an amazing experience," she said.

“Nasa, and from a government standpoint, have never picked anyone with a disability. They always have had these very strict standards," Cooper said.

"And these standards aren't safe," Barham added. "Nasa is doing a disservice to humanity and also to astronauts themselves by not considering inclusion upfront. When you get a group of people with diverse abilities together the sum is greater than the parts.

"There's this built-in belief that persons with disabilities are somehow less than and therefore all of the other considerations aren't brought to the table.”

Cooper suggests teaching astronauts sign language although when this was tried on her mission communication became problematic when the crew were floating upside down.

On his next mission Barham is eager to explore "the sonification of a gyroscope," which put into simpler terms is where sound and vibration gives the sense of movement in a particular direction.

He believes having such features installed in flight suits could benefit all astronauts, not just those with vision loss.

"Mary will be looking at something and doesn't need to glance up to know that she's actually experiencing a little bit of spin, because her left hip is vibrating,” Barham said.

"We need to get away from thinking of this as that which is done in excess. These are necessary considerations that we simply haven't been making yet."

With her feet back down on earth Cooper shares her thoughts on space travel being more accessible for people like herself.

"The thing that resonates with me the most is that we really don't need many accommodations," she said.

"Every single night I lay in bed and I just try and remember that feeling of complete weightlessness. It's a feeling I know I'll be chasing for a long time."

NASA began to operate in 1958, one year after Sputnik 1 was launched by the Soviets.