Pedestrians strolling down Kings Road in Chelmsford over the next week or so will be literally ‘dazzled’ by the festive lights outside Paul Bibby’s house.

Last year Paul put on a jaw-dropping display around his home to raise money for Broomfield Hospital where his wife Sharon was undergoing treatment for sepsis.

Sadly Sharon passed away in February, but that hasn’t stopped Paul continuing on the tradition and the Christmas display is in full flow again raising money for Mencap.

Mr Bibby, 51, has been moved by all the support from generous passer-by’s, especially those overseas. He told Essex Live: "I had a mother and daughter from South Africa come down to see the lights - they said they had never seen anything like it - they were really nice and bought me a box of biscuits for Christmas. Remembering I had never met them before that gesture was so nice." 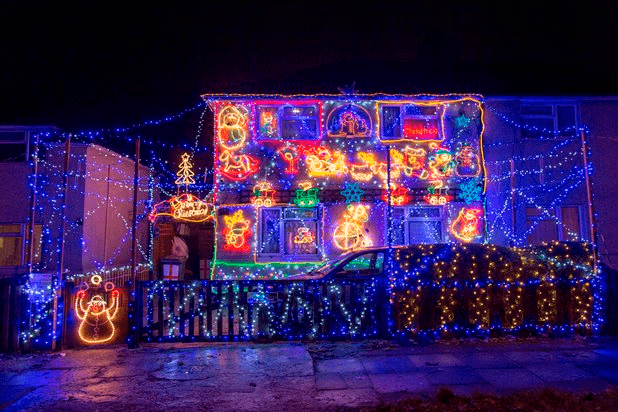 Paul is a carer for his son Aaron, 29 who has epilepsy (which probably isn’t helped from the flashing Christmas lights outside his home!) and cerebral palsy. Over the holiday season their family home is virtually covered by new lights which Paul picks up in the January sales.

Paul added: "I am raising money for Mencap.”I lost my wife in February so it has been a bit of bad time recently. But I thought I'd raise money for Mencap because they are great charity."

"At night time I usually get between 1o and 15 cars pulling up to take a look.

"It took three weeks to set up – and it takes half an hour to turn them all on. This is the best one yet."

It takes Paul 30 minutes to turn on all of the 60 separate displays which includes hundreds of lights.